Flybe: back in profit, but still one of Europe's least profitable listed airlines

Flybe returned to profit in FY2016 – according to its latest definition of adjusted pre-tax profit, this was its first positive result since before its stock market flotation in 2010. Quibbles over profit definitions aside, it is apparent that Flybe's restructuring under CEO Saad Hammad since 2013 is continuing to make progress. Nevertheless, with an operating profit margin of just 1.4%, Flybe was one of the least profitable listed European airlines in 2015 (or nearest financial year).

Flybe is now into what Mr Hammad calls the 'Profitable Growth' phase of its turnaround. In FY2016 it returned to capacity and revenue growth after declines in the previous year. In FY2017 it is accelerating its capacity growth at a time when market conditions are producing very soft yields, but Flybe is determined to maintain cost discipline.

Of course, the achievement of profitability is only the first step in profitable growth. FY2016 will benefit from fuel cost tailwinds and this should help it to take the next step – even if it faces unit revenue headwinds.

Flybe reported a net profit of GBP7 million for FY2016 (year to Mar-2016), after a net loss of GBP36 million in FY2015. The prior year result included a GBP12 million loss on discontinued operations, while the FY2016 result was boosted by a tax credit of GBP4 million. Adjusting for these differences, the pre-tax result was a profit of GBP3 million in FY2016, compared with a loss of GBP24 million a year earlier.

The operating profit was GBP9 million, compared with a loss of GBP13 million a year earlier. Revenue increased by 8.7% to GBP624 million and the operating margin gained 3.6ppts, to 1.4%. Among listed European airlines and their principal subsidiaries, Flybe's operating margin was higher than only two others in 2015 (or nearest financial year): Transavia and airberlin, both of which made operating losses. 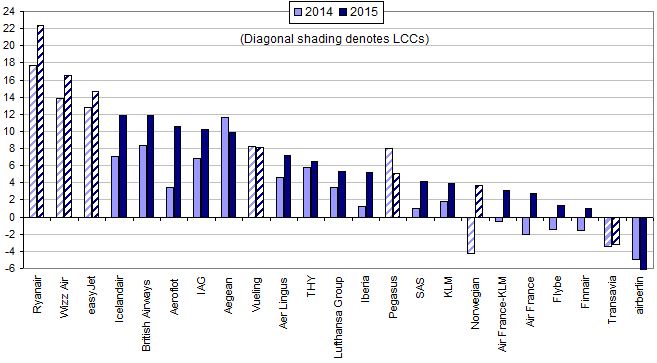 First positive adjusted pre-tax result since before 2010 IPO, but profit measure has changed

Flybe's return to revenue growth in FY2016 came after a dip in FY2015. Its pre-tax profit in FY2016 was only its second positive result since FY2010. Adjusting for gains and losses on the revaluation of USD loans, its adjusted pre-tax profit was almost GBP6 million (compared with a loss of GBP13 million in FY2015).

On the same basis, and also after deducting a GBP10.5 million gain on the sale of slots at London Gatwick in FY2014, the FY2016 adjusted pre-tax figure was Flybe's first positive result since FY2010 (which occurred before Flybe's IPO in 2010).

When Flybe announced its FY2015 results it also reported what it called a positive "illustrative" pre-tax profit of GBP17 million which, in addition to adding back USD loan revaluation losses, added back GBP26 million of costs related to aircraft identified as surplus, and a GBP4 million provision connected with EU261 consumer rights law.

This measure of pre-tax profit has now been quietly dropped, presumably because the most recent year's results look better when compared against a loss in the prior year. It is a sign that a turnaround is not wholly established when a company keeps reinventing the definition of its preferred profit measure.

See related report: Flybe: FY2015 result goes down - and up - but shows progress with restructuring

Note: March year end
*adjusted profit before tax is before revaluation gains/losses on USD loans, before GBP12 million loss on discontinued operations in FY2015, and before GBP10.5 million gain from sale of Gatwick slots in FY2014
Source: CAPA - Centre for Aviation, Flybe

Flybe closed FY2015 with a gross cash balance of GBP164 million – 8% less than the GBP178 million as at the end of FY2015. This was equivalent to 96 days of revenue, down from 113 a year earlier, but still a healthy liquidity cushion thanks to the legacy of its FY2014 issue of new equity capital and asset disposals.

Flybe's biggest operating business, the airline Flybe UK, increased seat numbers by 9.7% in FY2015 after cutting capacity the year before. Passenger numbers grew by only 5.9% to 8.2 million, while load factor lost 2.6ppts to 72.6%.

This followed a period of load factor increases throughout the current decade, although it remains quite high by comparison with other regional airlines and compared with its own low-mid 60% load factor range of a few years ago.

Flybe estimates that around 50% of its passengers are travelling for business, 25% VFR and 25% leisure.

See related report: Virgin Atlantic & Flybe hope codeshare helps them further into profit. Benefits are there for both

In fact, the fall in load factor was likely the result of the increase in yield (especially given the capacity growth), reversing the trends of the previous two years when falling yield had stimulated load factor increases.

Flybe's total revenue grew by 8.7%, mainly reflecting an 8.2% increase in passenger revenue and also given a boost by stronger growth in Flybe's revenue from other sources. However, revenue growth did not match seat growth.

Contract flying revenue increased by 19.8%, but accounted for only 2% of total revenue. Its contract for Brussels Airlines was extended by two years from Oct-2015, with two Bombardier Q400 aircraft. It commenced an ATR operation for SAS in Stockholm, which has now grown to five aircraft.

All other revenue increased by 12.7%, incorporating a 2.6% decline in Flybe Aviation Services' third party revenue to GBP22.8 million. Flybe UK revenue increased by 9.1% – just less than the growth in seat numbers. It can be calculated that Flybe UK's total revenue per seat fell by 0.5%.

Flybe's total operating costs increased by 4.8% – less than the growth in seat numbers and revenue in FY2016. In spite of capacity growth, fuel costs fell by 3.7% due to lower fuel prices. Ex fuel costs grew by 6.7%.

FY2016 had GBP20 million of surplus aircraft costs and no EU261 provision, so the rate of growth in cost per seat is flattered due to these one-off costs being lower. Calculated on the same basis as last year, cost per seat fell by 2.2% and ex fuel cost per seat was just above flat (+0.3%).

Owned aircraft to increase their share of the fleet; Embraer 195 legacy issue resolved

The Embraer E195 fleet was reduced from 10 to nine aircraft as the last of five left the fleet and were returned to lessors in FY2016. This was part of Flybe's initiative known as 'Project Blackbird': to deal with 14 E195s that had been regarded as surplus.

The remaining nine E195 aircraft are still in the fleet, with two based at Cardiff, one at Exeter and two at Doncaster as part of long-term agreements with those airports. One is at Newquay flying Public Service Obligation routes; one at each of Birmingham and Manchester operating high demand routes; and one on standby.

This was the final outstanding legacy issue identified by the CEO, Saad Hammad, when he joined Flybe in Aug-2013. After incurring GBP26 million of so-called surplus capacity costs in FY2015, Flybe said that it had absorbed GBP20 million of E195-related costs in FY2016: mainly linked to lease and maintenance costs, insurance, margin dilution and 'back into service' costs.

It anticipates another GBP10 million of such costs in FY2017; then GBP6 million in FY2018 and GBP4 million in FY2019. By redeploying nine of the E195s on regional routes it halved its outstanding liability for the period FY2016 to FY2019 to GBP40 million.

Flybe's E175 fleet remained at 11 aircraft through the year, while its Bombardier Q400 turboprop fleet increased by five, to 50 aircraft, thanks to deliveries from Republic Airlines under an agreement signed in FY2015.

Flybe will take delivery of a further 10 Q400s previously operated by Republic in FY2017 and will now take ownership of these aircraft, rather than leasing them as originally planned. However, it has announced that it will cancel plans to lease the remaining nine that were originally part of the deal with Republic. This will allow it to moderate future capacity growth plans.

Flybe also had a fleet of four ATR72 aircraft at the end of FY2016, in support of its contract flying operation on behalf of SAS in Sweden. This fleet has subsequently increased to five. 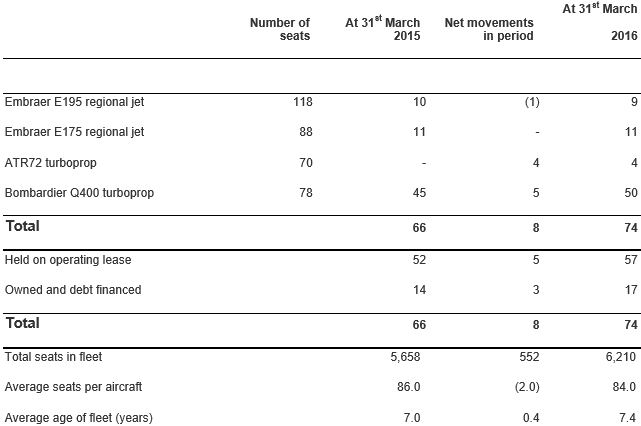 Seat numbers to grow by 19% in FY2017; revenue per seat under pressure

Flybe's commentary on 1H2017 so far has said that "the current industry environment remains challenging". Terrorist threats, industrial unrest in France (12% of Flybe seats), macroeconomic uncertainty and the UK referendum on EU membership are not forming an easy backdrop to its strongest seat growth in six years.

Flybe's return to profit is welcome, but it needs to widen the gap between revenue and cost per seat

Flybe's slim profit margin in FY2016 came about because its core airline operation managed to hold its revenue per seat almost stable, while lowering its total cost per seat to a level just below this. Moreover, the fall in cost per seat was not only the result of lower fuel prices: ex fuel cost per seat also fell.

Nevertheless, Flybe's cost per seat and revenue per seat trends have both been fairly flat over recent years. Lower fuel costs should allow further cuts to unit cost in FY2017, but unit revenue is also under heavy downward pressure.

Flybe's return to profit in FY2016, without having to restate any results or create a new concept of profit ("illustrative" or otherwise), is welcome. However, its turnaround will only be seen as convincing and endurable if it can widen (and sustain) the gap between unit cost and unit revenue.