The majority of Middle East and African shares ended trading either down or flat on Tuesday (23-Feb-2010). Lonrho subsidiary, Fly540, announced plans during trading to launch sales campaigns to increase British passenger demand to Kenya.

The carrier added its daily flights from Nairobi to Zanzibar are becoming increasingly popular and the Nairobi to Kilimanjaro route has been linked with daily services to Lake Manyara and Serengeti for the growing number of adventure seeking holidaymakers who wish to combine game viewing in the Ngorongoro Crater and Serengeti with climbing Mount Kilimanjaro. Lonrho was flat at the end of trading.

Kuwait National Airways ended trading flat. Its subsidiary, Wataniya Airways announced its Summer flight schedule as it adds its fifth aircraft to the fleet on 28-Mar-2010. The revised schedule is effective from 28-Mar-2010: 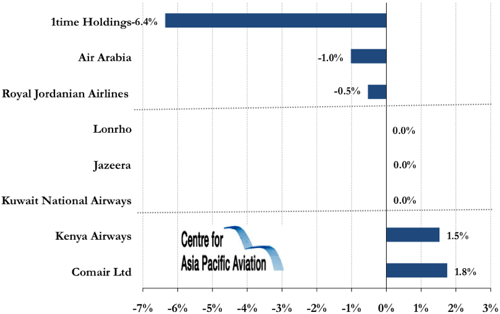