Lonrho Group, which owns a 49% stake in Fly540, stated the African LCC is seeking to continue to expand in the underserved African market with the launch of the Angolan and Ghana units of the carrier and continued organic and aggressive growth in its home market, Kenya. Lonrho added that the Fly540 network is building towards carrying half a million passengers p/a with the carrier reporting revenues of GBP21.5 million in the 12 months ended Sep-2010.

The carrier noted that while international standard regional aviation is a fundamental requirement for any emerging market, Africa, and its more than 1.0 billion population, is hampered by poor infrastructure, a lack of roads and railways and long distances between urban populations.

The Nairobi-based carrier’s traffic is expected to grow “significantly” once the Angolan and Ghanaian hubs are operational and the objective for the carrier remains to connect 18 countries in Africa by the end of 2012. Fly540's East African hub, meanwhile, is showing strong growth and has built market share to 15% of the domestic market in Kenya. During the 12-month period, services into Tanzania, Uganda and Burundi were further expanded with this growth trajectory expected to continue. 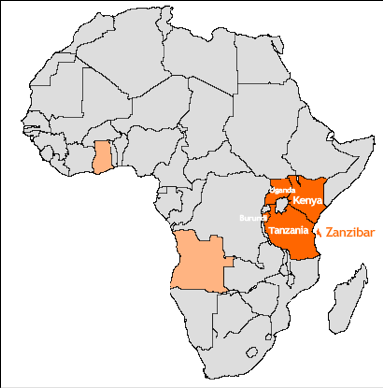 Fly540 is scheduled to take delivery of five aircraft in 2011 to boost its six ATR 72 aircraft fleet with a further four scheduled for delivery in 2012.

Lonrho’s aim is to develop Fly540 into an international standard regional carrier operation that will be the first airline to address two markets, the regional movement of passengers within Africa and the regional distribution of passengers arriving in Africa from intercontinental services.

Lonrho noted that the number of passengers flying into Africa has seen strong growth, and the continent is serviced by an expanding number of global carriers such as British Airways, Virgin, Delta, Air France, Emirates, Qatar and Singapore. This is expected to create further benefits for Fly540.

Lonrho believes opportunities for “responsible businesses are significant” in Africa. “Africa is making real progress, stimulated by a population that has reached one billion people and the booming oil and mineral industries that are driving economic growth,” it has stated.

The continent today has more than 1.0 billion people. By 2050 it will have doubled to 2.0 billion, equating to 22% of the global population (UN population division). According to a 2010 McKinsey report, Africa is forecast to have 128 million households with disposable income by 2020.

GDP in Africa between 2000 and 2010 increased on average at 5.5% p/a, with many countries delivering double-digit growth. External debt has decreased from 65% of GDP to 23% and investment has grown from 17% of GDP to 23%. McKinsey added that Africa's collective GDP is expected to reach USD2.6 trillion by 2020 with Africa being home to some of the fastest-growing economies in the world primarily driven by the expanding oil, gas and mineral industries.

After a drawn out process, Fly540 Angola commenced operations in Dec-2010 with daily services from Luanda to Cabinda and Soyo. The carrier stated significant opportunities exist in the market, stating: “The Angolan regional and domestic market remains significantly under-served and the demand for Fly540 Angola to meet this latent demand is clear.”

Services commenced with a single aircraft serving the north of the country from the capital Luanda with three times daily frequency. An additional two aircraft will be arriving from Europe within four to six weeks of launch. The carrier will launch service from Accra to Senegal and Equatorial Guinea in 1Q2011 with the operation to expand to a six-destination and six-aircraft operation over the next six months.

Operations were initially thought to start in 2009 but have been delayed as Angola is under scrutiny by the ICAO and its national airline faces a qualified ban in operating to the European Union over a range of safety concerns. Fly540 Angola has become the first private commercial airline in Angola with the launch of services.

Ghana next on the destination map

Ghana will be next on the schedule of expansion with the Ghana operation expected to be established in 1Q2011 with services from Acrra to Senegal and Equatorial Guinea.

Fly 540 has also applied for air service licences in a number of other eastern, central, southern and western African countries, aiming to become a major continental player on domestic and regional routes.

In Jun-2010, it was also reported that the carrier’s plans for a Zimbabwean budget airline, Fly540 Zimbabwe, were on course. The company has been working for more than two years to introduce operations in Zimbabwe but has faced a number of constraints which have stalled the plans. Fly540 Zimbabwe has obtained a franchise agreement, for the Fly540 brand, from Fly540 Africa.

Fly540 in mid-Dec-2010 also announced the purchase of Kenya’s East African Safari Air Express (EASAX). Announcing the purchase, Fly540 stated: “The region’s first low-cost carrier put in an offer to buy EASAX lock, stock, and barrel.” The acquisition of the troubled carrier will give Fly540 increased access in the eastern African region as it continues its rapid expansion in the region.

EASAX grounded its operations in Nov-2010 but has stated the Fly540 relationship is a partnership and not a buy-out. EASAX, a victim of the escalating fare war in Kenya, had a previous relationship with Fly540 through an initial wet lease of the carrier’s DC9 aircraft by Fly 540.

EASAX Director George Kivindyo was quoted in the Daily Nation as sating: “What we did was to sign an agreement that will see us work together going forward. It is a way for both of us to beat growing competition in the market.” He said the two carriers would operate along the lines of a codeshare.

Following the agreement, EASAX almost immediately resumed services across its network, particularly those to Juba and Somalia’s Hargeisa. The deal will give Fly540 access to new routes and room to add frequencies on routes such as Kisumu, Mombasa and Malindi at a time when Fly540 is planning to purchasing new aircraft to serve the routes. It will add competitive pressures on the routes at a time when the operators led by Kenya Airways, Jetlink and Airkenya have intensified their activities as they cut fares in an attempt to grow and defend market shares.