Shares in Finnair gained 0.5% yesterday, as the carrier announced plans to return to its regular schedule gradually from today.

The Finnish Airline Pilots Association (SLL), which represents Finnair's pilots, accepted a proposal submitted by the National Conciliator yesterday. In addition to a 5% wage reduction, the parties will pursue a 13% cut in unit costs. Finnair has also committed to a year-long redundancy protection provision.

While the pilots’ strike has ended and Finnair will return to its regular schedule, traffic is not expected to return to normal until Friday. Finnair cancelled over 500 flights due to the strike, which affected more than 40,000 passengers.

Meanwhile, Aer Lingus’ shares were up 0.8%, as the Irish carrier confirmed it will enter negotiations with the Irish Labour Relations Commission and unions regarding its EUR97 million cost cutting plan. The carrier plans to cut up to 680 positions and cut staff costs by EUR74 million, as well as EUR23 million a year through other non-payroll efficiencies.

Shares in British Airways, which is also in union negotiations, fell 3.2% yesterday.

Lufthansa’s shares dipped 2.1% yesterday, as the German carrier’s CEO, Christoph Franz, announced plans to introduce changes to Economy seating and pricing. Lufthansa is looking to create “additional markets through favourable prices” and stated the carrier can induce demand through lower fares to fill larger aircraft on “practically every route”. Lufthansa also announced plans to change its Economy-class seat configuration and reduce seat pitch, beginning in 2010. The carrier is considering plans to eliminate galleys and other amenities such as coat cupboards on aircraft operating short haul services. 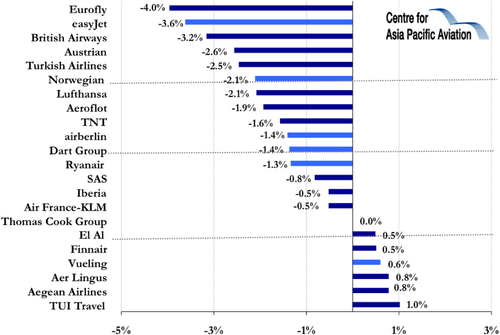