Finnair: net losses are a hard habit to kick. 2014 cost cuts wiped out by falling revenue

Finnair's net loss for 2014 was its first since 2011, but its fifth in the seven years since 2008. Over the past decade or so, losses have been more common than profits. Its niche in connecting Europe with Asia via Helsinki has placed Finnair among Europe's top twenty airline groups, although Finland ranks outside the top twenty countries by population.

But converting this niche into sustainable profitability is proving a major challenge. Whenever Finnair makes progress with cost reduction (and it has made major strides with labour productivity), it seems that revenue pressures wipe out those benefits. In 2015, Finnair anticipates a further drop in unit revenue, reflecting the highly competitive nature of its markets.

This year will also present opportunities for Finnair to build a more solid base. It will be the first full year under new labour agreements and with a number of product improvements in place. It will also see its first A350 delivery. Lower fuel prices are a stroke of luck, but Finnair needs to ensure it can be profitable without relying on this good fortune.

Back into loss in 2014, the fifth in seven years

In 2014, Finnair fell into losses at both the net and operational level. The net result was a loss of EUR83 million, compared with a profit of EUR23 million in 2013. The comparison with 2013 in this result is disproportionately affected by the previous year's gain in the sale of Finnair's stake in Norwegian Air Shuttle and by negative fair value changes in the value of derivatives and of foreign currency denominated maintenance reserves. Nevertheless, the operational result also deteriorated, falling to a loss of EUR37 million after a profit of EUR12 million in 2014. Revenue fell by 4.8% to EUR2,2285 million.

(Note that 2013 figures have been restated due to a change in the accounting treatment of overhauls. Previously, the 2013 net result had been reported as a profit of EUR11 million and the operational result as a loss of EUR5 million.) 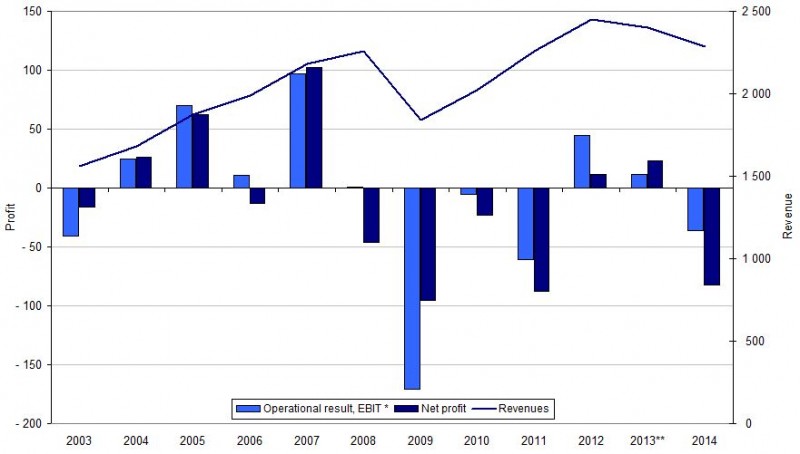 In spite of Finnair's troubled track record of profitability, it has steadily managed to reduce its debt in recent years, while holding its liquidity fairly stable. At the end of 2014, its gross cash balance stood at EUR426 million, down only EUR33 million over the year. This was equivalent to 68 days of revenue, a reasonable cushion.

Gross debt fell by EUR190 million to EUR428 million at the end of 2014, with net debt down to just EUR2 million. The ratio of net debt to equity fell from 23% to almost zero, but, adjusting for off-balance sheet operating leases by capitalising them at eight times annul rentals, this ratio increased from 91% to 123%. 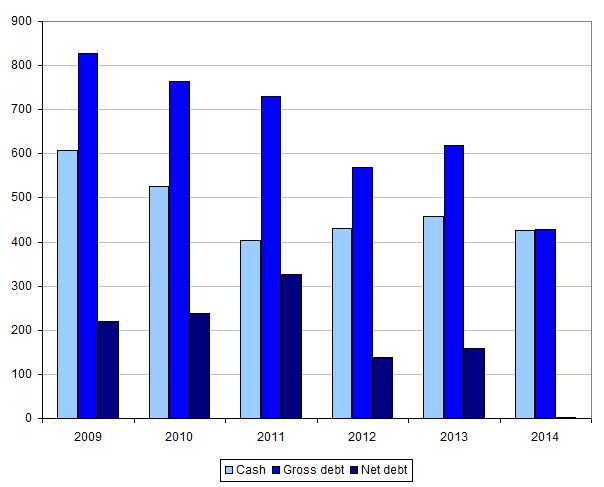 The Airline Business segment is key

The Travel Services segment, which consists of travel agencies, managed to increase its operational profit from EUR3 million in 2013 to EUR7 million in 2014. 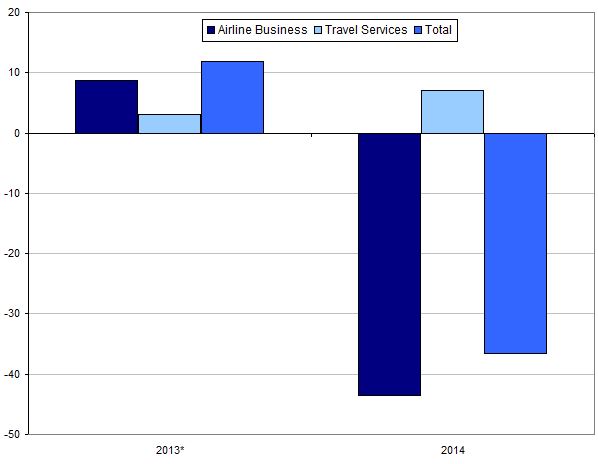 Finnair reduced its capacity in ASK by 0.9% in 2014 and RPKs stayed flat at the same level as in 2013. Passenger load factor gained 0.7ppts to reach another new high level of 80.2%, close to the average level for members of the Association of European Airlines in 2014. 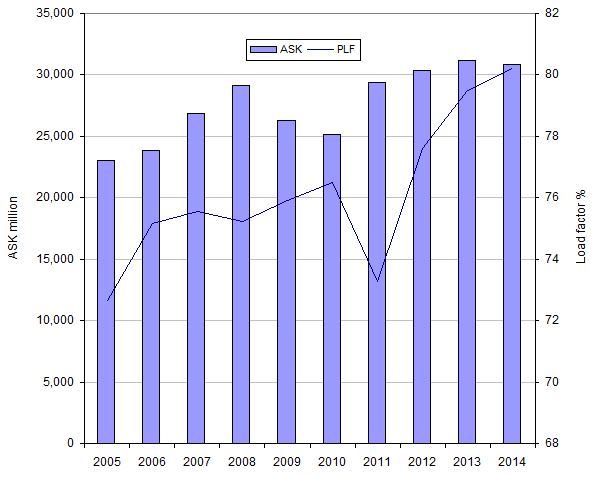 Capacity reduction in 2014 was most dramatic on Finnair's North American network, where ASKS were down by 6.2%. In spite of this capacity cut, passenger load factor fell by 1.2 ppts on the Atlantic. However, Finnair's passenger traffic revenue held up (+0.3%), suggesting that the joint venture with oneworld partners British Airways, American and Iberia had a positive impact on pricing.

Finnair also cut ASKs in Asia, by 2.0%, where load factor gained 1.4 ppts, but traffic revenue fell by 4.1%, which was more than the capacity cut. Finnair's strategic focus on Asia had previously seen it growing capacity to the region, but weak demand and currency movements led to soft pricing in 2014 and Finnair decided to reduce its exposure slightly.

Nevertheless, Asia remains a key region for Finnair, accounting for 50% of its ASKs and 44% of its passenger revenue in 2014. It is by offering connections between Europe and Asia via its Helsinki hub that Finnair has grown to be a much larger airline than might otherwise be the case for one based in a country of the size of Finland.

Traffic revenue also fell in Europe, where it was down by 4.9% on a modest 0.9% ASK increase. In the domestic market, Finnair increased its ASKs by 4.1%, but passenger traffic revenue dipped by 0.9%.

In total, passenger traffic revenue fell by 4.0%, which was more than the overall 0.9% cut in ASKs. The trends in 4Q2014, however, were more encouraging. Traffic revenue was up by 0.9%, in spite of an ASK cut of 0.5% in 4Q. Non both long haul segments, North America and Asia, traffic revenue growth performed better than capacity in 4Q.

The 4.8% reduction in total group revenue mainly reflected the performance of the Airline Business segment, but was also weighed down by the 14.8% fall in the revenue of the Travel Services segment. Travel Services suffered from weak demand in Finland, both for business and leisure travel, reflecting the economic backdrop.

The segment's improved operating result was thanks to cost reduction and organisational restructuring.

Costs down by 2.8% and savings target beaten

Finnair exceeded its end 2014 cost reduction target of EUR200 million in annualised savings by EUR17 million. Agreements were reached with all its labour groups during 2014, in spite of a difficult industrial relations climate earlier in the year. These agreements provide for additional savings in the future, starting in 1Q2015. 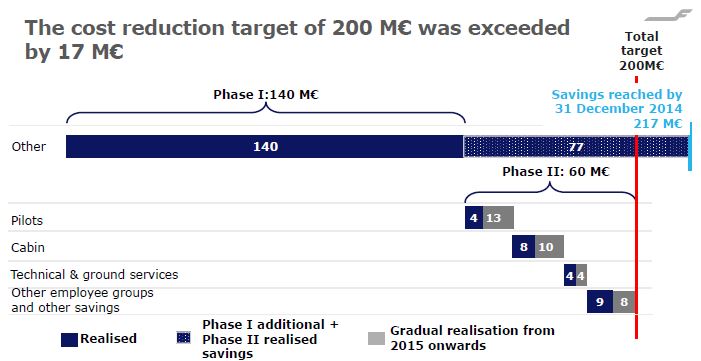 Group average headcount fell by 11.7% in 2014, with a 12.5% reduction in the Airline Business segment and a 14.1% cut in Travel Services. The average number of employees in 2014 was 30% below the level of 2011, reflecting a concerted effort by management to improve labour productivity.

Finnair average number of employees by business segment 2013 and 2014

And yet, the operating result of both the group and the Airline Business segment fell from 2010 to 2014. If CASK falls by more than RASK, the gap between the two narrows and this should mean that the loss narrows. Unfortunately, we cannot reproduce Finnair's RASK and CASK figures from its published data.

Instead, we have done our own calculations, based on segment results for the Airline Business segment (including the no longer reported Aviation Services segment up to 2012). These calculations include all revenue and all costs reported for this segment (not just those associated with passenger transport activities) on the basis that they all go into the operating result.

Finnair is working hard to reduce unit costs, with demonstrable improvements to labour productivity, for example, but is struggling to stem the downward flow of unit revenue. 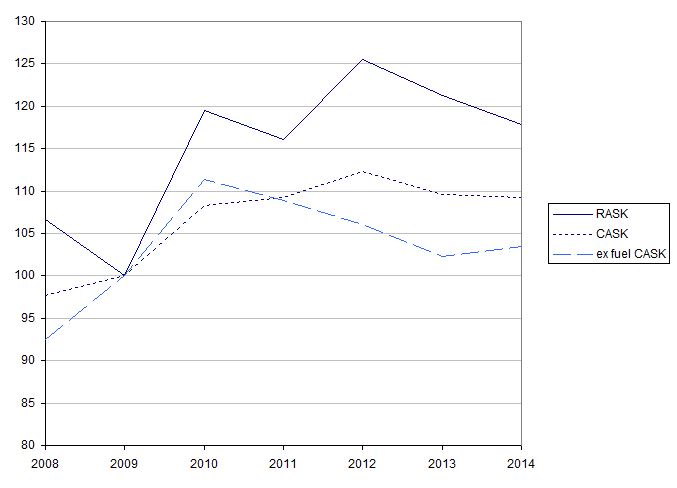 *Airline Business segment (including Aviation Services segment up to 2012)
Note 2013 figures restated due to a change in the accounting treatment of overhauls
Source: CAPA – Centre for Aviation, Finnair

2015 outlook: a further slide in RASK, but CASK also set to fall

In 2015, Finnair plans ASK growth of 3%, but that revenue will remain at the level of 2014. So, a further slide in RASK is expected, in spite of product upgrades and a renewed focus on ancillary revenue. The fact remains that its markets are very competitive. On short haul, low cost carriers provide fierce price-based competition and long haul markets are vulnerable to more cost efficient airlines from both Asia and the Gulf that also have strong commercial propositions.

Finnair's membership of oneworld, and the Atlantic joint venture, point the way towards more collaborative relationships with partners as a means to try to address its unit revenue challenges (in addition to the internal avenues already being pursued).

The cost measures implemented, including new labour agreements, should help it to reduce ex fuel CASK in 2015, although Finnair does not say by what amount. Fortunately, lower fuel prices should give an additional downward momentum to total CASK in 2015 (25% of 1H and 46% of 2H fuel needs are unhedged) and this may allow an improvement in profitability. Moreover, Finnair's A350 deliveries, which will begin in Oct-215, should be positive for both cost efficiency and revenue generation.

Nevertheless, the achievement of sustainable profits through the cycle, independent of the fluctuations of fuel prices, will require continued unit cost reduction. Even then, it may be elusive for Finnair.