Finnair narrowed its operational loss for 2Q2015 and for 1H2015. In spite of broadly flat capacity (ASK growth of just 0.4%), passenger revenue increased by more than 4%, helped to some extent by currency movements. However, total revenue fell slightly and the improved operational result was achieved through a bigger reduction in costs, thanks to lower fuel prices.

Finnair noted that there were signs of recovery in the demand for consumer and business travel in all traffic areas. Its 1H2015 report shows that it has started to improve its results and it now targets a break even or slightly positive operational result for FY2015 after a EUR37 million loss last year.

Moreover, with average 2Q2015 headcount down by more than 500 (10%) year on year, Finnair's restructuring of recent times paves the way for productivity gains. Its profitability should also benefit from the introduction this autumn into its long-haul fleet of Airbus A350-900 aircraft to replace ageing A340 equipment (which currently have an average age of 12.7 years according to the CAPA Fleet Database).

Finnair's net result for 2Q2015 was a loss of EUR6 million, a 75% narrower loss than in the same period a year earlier. The operational result, which excludes fair value changes in derivatives, changes in the exchange rates of fleet overhauls and non-recurring items and is also before interest and tax, gives a more accurate view of the underlying performance of the business.

The improvement in the 2Q operational result was mainly driven by higher passenger traffic revenue, with positive contributions also from lower fuel and other costs, partly offset by lower cargo and other revenue and higher traffic charges.

Finnair kept its capacity in ASKs broadly at last year's level (+0.4%) in 2Q2015, although traffic in RPKs fell fractionally (-0.1%) and passenger load factor dipped by 0.4ppts to 79.1%. Passenger numbers increased at the faster rate of 4.2%, outstripping RPK growth since much of the increase was focused on shorter distance routes.

Cargo capacity (ATK) fell by 10.7% in 2Q2015, reflecting reduced full freighter traffic (freighter flights to Asia were discontinued at the end of 2014), but cargo traffic volume (RTK) fell even more rapidly 19.2% due to ongoing demand weakness. After the period under review, in Jul-2015, Finnair Cargo announced that it would open a new London hub in partnership with IAG Cargo and jointly lease freighter capacity connecting this with Helsinki. 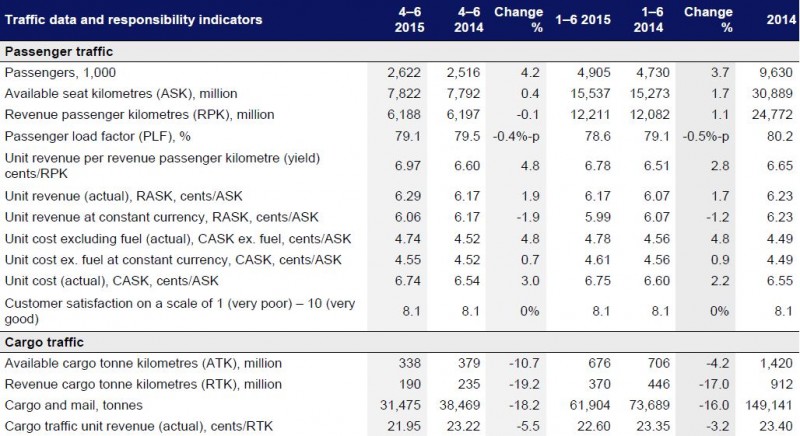 Finnair's passenger capacity growth was highest in the domestic market, where ASKs were up 7.6%, traffic (RPKs) was up 9.7% and revenue grew by 11.2% in 2Q2015. Much of this domestic growth was due to the transfer to Finnair from 1-May-2015 of routes previously operated by Nordic Regional Airlines (formerly Flybe Finland).

On routes to Asia, Finnair reduced ASKs by 4.2%, helping a small improvement in load factor and revenue was up by 1.7%. The capacity reduction to Asia was the result of Finnair's withdrawal from Helsinki-Hanoi and cabin configuration changes, including new business class seats and a new economy comfort passenger class.

Total revenue was down 0.8%

Finnair's revenue fell by 0.8%, although total passenger traffic revenue (including leisure) grew by 4.6%, ahead of the 0.4% increase in total ASKs. According to Finnair's definition and calculation, its passenger unit revenue increased by 1.9%. This was boosted by currency movements, particularly the appreciation of Asian revenue currencies and unit revenue at constant currency fell by 1.9%.

Cargo revenue fell by 22.4%, more rapidly than the 10.7% cut in cargo capacity, but Finnair says that the discontinuation of freighter flights has improved profitability.

Operating costs fell by 1.9% in 2Q2015 in spite of the very small capacity increase. Fuel costs were down by 6.3%, reflecting lower market prices for jet fuel (partly offset by the appreciation in USD versus EUR and by Finnair's fuel hedging programme). Ex fuel costs were roughly the same as in 2Q2014 (down by 0.2%).

Revenue in Finnair's major business area, the Airline Business segment fell by 1.2% in 2Q2015 (after an increase of 0.5% in 1Q), as increased passenger and ancillary revenues were offset by lower cargo and other revenues. Ancillary revenue leaped by 33%.

In the Travel Services segment, revenue fell by 2.7% as the Suntours package tour operator decreased its supply by almost 20% and significantly reduced its stand-alone flights to holiday destinations (now part of the Airline Business' passenger traffic). Revenue at the business travel agency SMT was flat.

The group's improved operational result is largely due to a 29% narrowing of the loss in the Airline Business segment from EUR21 million to EUR15 million. By contrast, the Travel Services segment's operational result improved from EUR1.1 million to EUR1.7 million, reversing the fall in its result in 1Q and suggesting that the restructuring in the Suntours part of this division is starting to have a positive impact. 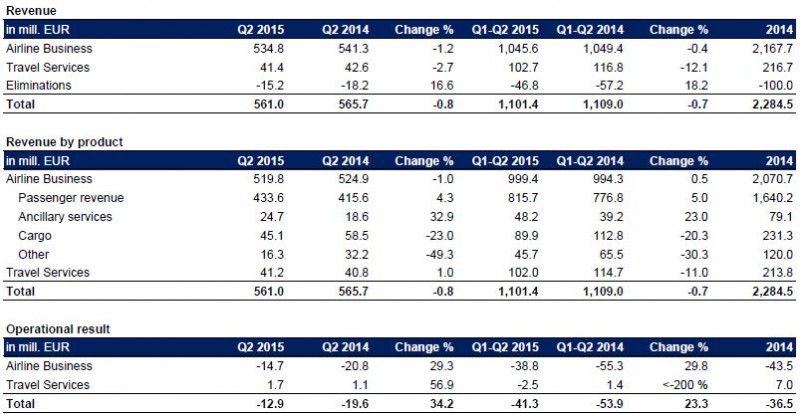 Finnair is targetting a FY2015 break, but its unit cost guidance increased

For FY2015, Finnair continues to plan ASK growth of around 3% and expects approximately flat revenue (as before). Regarding ex fuel unit cost at constant currency, it now expects this to be flat year on year, whereas previous guidance anticipated a reduction. Ex fuel unit cost at constant currency grew by 1.1% in 1Q and by 0.7% in 2Q and so it will need to fall in 2H if Finnair is to meet its (less ambitious) new target.

The most significant new element of Finnair's guidance is that it now says that it expects 2015 operational result to be break even or slightly positive, whereas it had not previously given a profit target. To achieve breakeven in FY2015, Finnair will need a 2H2015 operational profit of EUR41 million, compared with its 2H2014 figure of EUR17 million.

This would be a decent improvement in its 2H and FY result (it made an operational loss of EUR37 million in FY2014), but the higher unit cost outlook (and unchanged revenue guidance) suggests that it may be a downgrade to management's expectations.

As CAPA has noted previously, Finnair is still far from its medium term profitability targets of an EBIT margin of 6% and an EBITDAR margin of 17% over the cycle.

Finnair: 1Q loss narrows as its strategy review places a focus on customer and operations

Finnair: net losses are a hard habit to kick. 2014 cost cuts wiped out by falling revenue

In order to achieve sustainable levels of profit, Finnair may eventually need to find a partner in the gradual consolidation process in the airline industry. However, it has a healthy level of liquidity (EUR532 million at the end of Jun-2015, equivalent to almost three months of revenue).

This should provide breathing space to fund the delivery of 11 new wide bodies in the next three years, giving the opportunity to increase its profits and widen its strategic options. Finnair will be the first A350 operator in Europe when deliveries  commence later this year and will take 19 of the aircraft by 2023. Its lower fuel burn will be beneficial to unit cost and its superior cabin comfort may give support to unit revenue.

The real test for Finnair as it strives to achieve sustainable levels of profitability may come whenever the next significant industry downturn takes place.

Guests at the CAPA World Aviation Summit in Helsinki, 7/8 October 2015, will be offered a complimentary Finnair VIP trip on a demonstration flight of Finnair's new A350 before it enters service.
See here for further information.