Finnair returned to profit in 2015, thanks in no small part to lower fuel prices. This was only its third positive result since before the global financial crisis, and it continues to lag the industry in its profitability. Nevertheless, its returns to profit and to both capacity and revenue growth are important markers on its financial progress. Perhaps more significantly, in a sector accustomed to thin margins where liquidity and balance sheet strength are vital, Finnair has moved into a net cash position.

However, Finnair's revenue was still below where it was in 2013, and its operational margin lagged far behind the rest of the global airline industry, which was collectively reaching an estimated new peak margin in 2015.

Finnair's return to profit and revenue growth is welcome, but it still has much to do. CEO Pekka Vauramo recognises this, saying, "we will now look to accelerate our profitable growth". Strong labour productivity improvements in recent years have provided a good basis for this. Finnair's fleet improvement programme, led by A350 deliveries that started in 2015 and will continue to 2023, should also be beneficial.

2015: back in profit; 4Q2015 is fifth successive quarter of improvement

The 4Q2015 operational result was just above breakeven, returning the traditionally weak winter quarter to profit after a EUR9m operational loss in 4Q2014, and extending its year on year profit improvement to five consecutive quarters.

Finnair's 2015 net profit was its best result since 2007, although it was boosted by non-recurring items, including book gains on the sale and leaseback of A350, ATR and Embraer aircraft.

The operational result was its best since 2012 and 2015's increase in revenue was the first since 2012. Last year, CAPA suggested that net losses were a hard habit for Finnair to kick, and with five losses in the past eight years it cannot afford to relax. 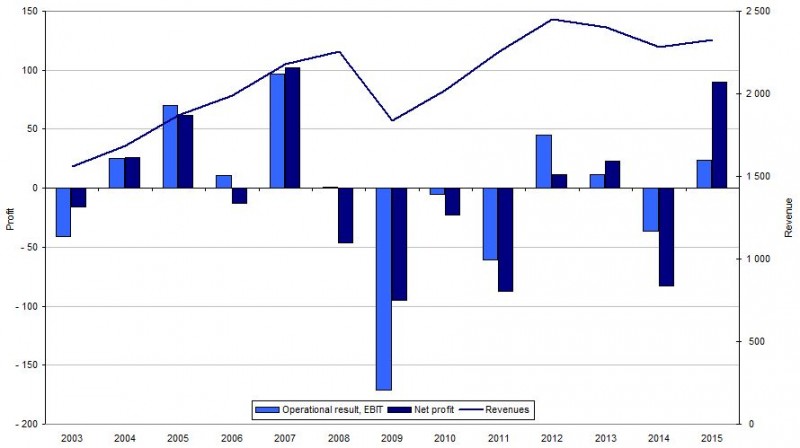 If Finnair's income statement has taken small positive steps, its balance sheet has taken even bigger strides. At the end of 2015 its gross liquid funds stood at EUR708 million, up by two thirds from EUR426 million a year earlier. This 2015 year end balance was equivalent to 111 days of revenue, compared with 68 days at the end of 2014.

Moreover, gross debt fell by 19% to EUR346 million at the end of 2015 and Finnair closed the year with a net cash balance of EUR362 million, compared with net debt of EUR2 million a year earlier. The ratio of net debt to equity fell from almost zero to -50%, but adjusting for off-balance sheet operating leases by capitalising them at eight times annual rentals this ratio fell from 123% to 59%.

In spite of higher capital expenditure in the year, Finnair's balance sheet benefited in 2015 from its return to profit and a consequent improvement in operating cash flow, and also from sale and leaseback transactions and the issue of a hybrid bond. 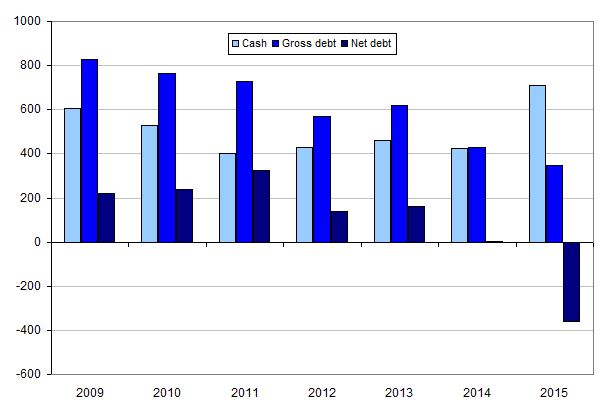 The improvement in the 2015 operational result was driven by the performance of the Airline Business segment, which swung from a loss of EUR44 million in 2014 to a profit of EUR17 million in 2015. The operational profit of the Travel Services segment remained stable at EUR7 million. 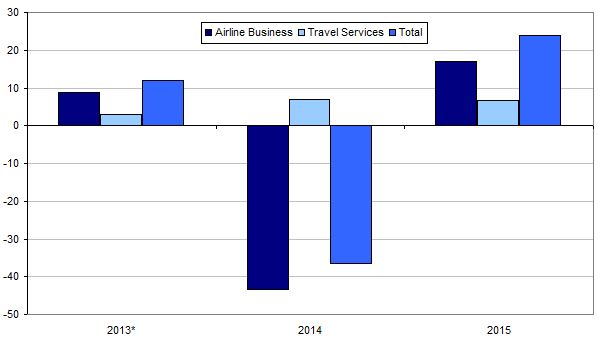 Finnair's annual load factor has improved by 7.1 ppts since 2011. This reflects cautious capacity management and commercial initiatives, although the rate of improvement has slowed in the past couple of years and load factor looks to be levelling off. 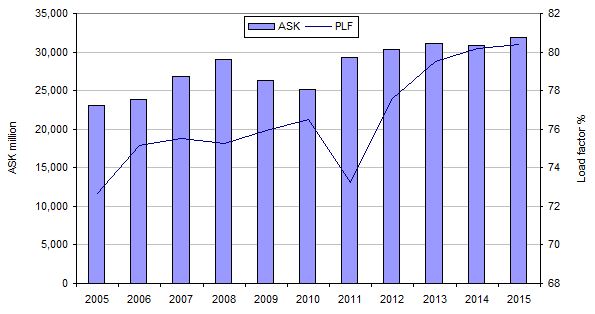 Its highest load factor was on its other long haul route area, the North Atlantic, where it was 83.1%, although this was down by 2.0ppts after a strong 26.2% increase in ASKs. The strong ASK growth to North America in 2015 reflected its May-2015 launch of a seasonal route to Chicago and its Oct-2015 launch of a Miami service.

The 2.0% cut in ASKs to/from Asia was Finnair's second successive annual reduction in capacity to the region, taking its share of the airline's total ASKs down to 48% in 2015 from 51% in 2013. Over the longer term, Asia remains Finnair's key strategic growth market and it plans to double its traffic to the region from 2010 to 2020. In May-2016, it will launch services to Guangzhou and Fukuoka (the latter making it the only airline with nonstop flights from Europe to four major Japanese cities).

The introduction of the first A350-900 into the long haul fleet, used on the Shanghai route from 21-Nov-2015, was the catalyst for a slight ASK increase to Asia in 4Q2014. The ASK increase was the result of the A350's higher number of seats compared with Finnair's existing long haul fleet of A330 and A340 aircraft. Finnair is now deploying A350s on Bangkok and Beijing, and the next A350 route will be Hong Kong in late Mar-2016.

Revenue per ASK (RASK) based on its external revenue divided by ASKs fell by 0.8% in the Airline Business segment - note that this differs from Finnair's reported RASK, which is based on adjustments for cargo and on-board sales, which cannot be replicated from its publicly reported data.

The Travel Services segment's revenue fell by 3.2%, although this division managed to maintain its 2015 operational result at its 2014 level.

Costs down 1.0%, thanks to lower fuel prices

Finnair's operational costs fell by 1.0% in 2015, in spite of capacity and revenue growth. The fall in costs was due to a 9.8% reduction in fuel costs; this was the result of lower fuel prices, partly offset by a weaker EUR versus USD and Finnair's hedging programme, which partly delayed the benefit of lower market prices.

According to CAPA calculations, Finnair saved EUR85 million in 2015 compared with the cost it would have faced if it had paid the same average fuel cost per ASK as in 2014. This figure dwarfs the EUR24 million operational profit.

Fleet transformation led by A350

There have been some minor delays in A350 deliveries by Airbus, but on a conference call to discuss the 2015 results CEO Pekka Vauramo reassured analysts that Finnair was planning to ensure that any customer disruption was minimal. Furthermore, Airbus was providing compensation where any additional cost was incurred.

Finnair's all Airbus narrowbody fleet will be re-equipped with higher density seating, adding between six and 13 seats per aircraft from 2017. As a result, its short/medium haul aircraft will add 4% to the ASKs flown.

Overall, the fleet changes should lead to lower unit operating costs, as a result of more efficient engines and a larger number of seats per aircraft.

Unit labour cost grew in 2015, but the longer-term trend of productivity is positive

The 2.5% increase in labour costs noted above came in spite of a 5.1% fall in average headcount in 2015, meaning that there was an 8.1% increase in employee costs per employee. This was mainly due to a provision for a new share-based incentive scheme for pilots, as well as addressing other staff bonuses, additional cabin crew holiday pay and early retirement provisions.

However, 2015's increase in employee costs per ATK should be seen in the context of a longer-term downward trend. Indeed, there have been strong improvements in labour productivity since 2011, on a number of measures.

RASK outperformed against CASK in 2015

Although this unit cost cut owed much to lower fuel prices, Finnair's focus on labour productivity and its investment in labour incentive schemes should reap rewards in the future. 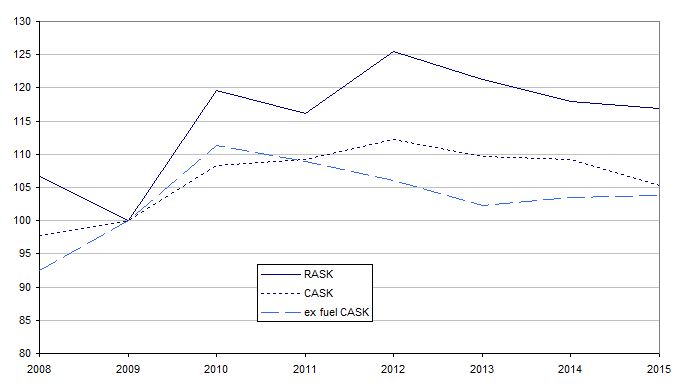 Finnair's outlook is brighter than for some years

In 2016, Finnair expects growth in both capacity and revenue, in spite of what it calls "renewed uncertainty" in its markets – a reference to both the macroeconomic and geopolitical outlooks.

It has not announced a capacity growth target, but indications from OAG schedules data into summer 2016 suggest seat growth in the low single digits in Europe, a return to growth in Asia Pacific of close to 10% (Guangzhou and Fukuoka launches; use of A350 on Shanghai, Bangkok, Beijing, Hong Kong) and 15% growth on North American routes (increased capacity to Chicago; Miami service extended to full year). This would mean total growth above the 3.1% ASK increase of 2015.

Finnair will only set a profit target after its 1H2016 results, but it has said that "the lower price of jet fuel supports [its] financial performance in 2016". This can be interpreted as another increase in operational profit, helped by lower average fuel prices net of hedging.

The key unknown will be the extent to which lower fuel costs are passed through to passengers in the form of lower fares. Unit revenue was again weak in 2015, particularly after removing the positive impact of currency movements, and it is difficult to see it solidifying much in 2016.

Nevertheless, labour agreements reached in 2014 and the fleet improvements that are now under way may well combine with low fuel prices to give Finnair its brightest outlook for some years.