Finnair (+1.0%) rose after Senior VP Sales and Marketing Mika Perho stated the carrier's Asian strategy is "working very well and is creating many opportunities for us". Finnair has confirmed plans to increase the number of direct services to Seoul, Nagoya, Osaka and Delhi from the end of 2010.

Air France-KLM (+0.7%) was also up for the day on further analyst comments. Credit Suisse Group AG raised its rating of the airline’s shares from "underperform" to "neutral", due to an improved Sep-2010 traffic results across the industry. The gain was despite a 0.7% decline in France’s CAC for the day, due to continued national strike action in the country.

Elsewhere, Aeroflot (+5.3%) continued to rise on news the Russian Government plans to privatise part of its stake in the carrier. Aegean Airlines (+3.9%) and Dart Group (+1.8%) also gained. Norwegian (-3.3%) and Lufthansa (-2.5%) suffered the biggest declines of the day. 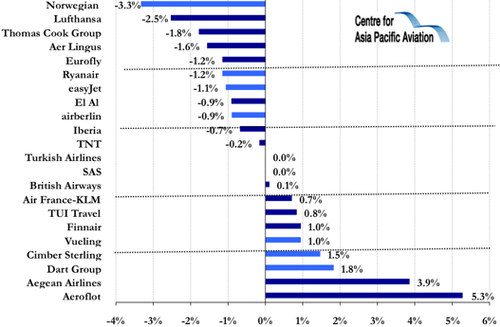