North and South American carriers’ stocks surged higher on Monday (26-Jul-2010), following the release of improved US home sales data during trading, showing signs of an economic recovery that could lead to improved demand. The Dow (+1.0%) moved higher as a result, as did the AMEX Airline Index (+2.9%).

Standard & Poor’s equity analyst, Jim Corridore, told Reuters that airline stocks have been trading lately on the overall economic outlook, stating that if the economy is going to start improving, airline stocks will be “golden”.

Oil prices for the day were flat, remaining below the USD80 mark at USD78.87.

Continental and United in process of selecting senior officials

Continental Airlines (+5.8%) and United Airlines (+5.6%) also rose strongly on the back of news last week that the airlines are in the process of selecting senior officials for the merged entity. United meanwhile announced plans to delay its operations control centre relocation to Chicago’s Willis Tower until early 2012.

Elsewhere, US Airways (+5.4%) also gained for the day, with a large number of call options changing hands in morning trading.

Air Canada was the only carrier not to rise for the day, remaining flat, as Canada’s TSX (0.3%) rose marginally compared to the Dow. Latin American carriers, LAN Airlines (+0.2%) and GOL (+0.7%), meanwhile rose only marginally. 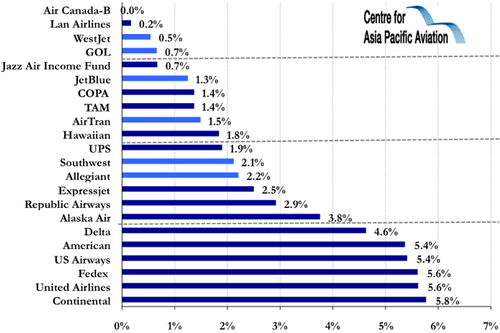