North and South American airline stocks dived on Monday (23-Aug-2010) as the US market continued to be weighed down by concerns of the stability of the country’s economic recovery. The Dow (-0.4%) declined as a result, despite news of planned mergers and acquisitions.

In response, the AMEX Airline Index dropped 1.8%. The fall in airline stocks was despite another decline in oil prices (-0.4%) to USD73.14.

Dahlman Rose & Co wrote in a note during trading that US airline stocks again outperformed the S&P 500 last week, despite falling 0.6%. For the year-to-date, airline stocks have gained 16.6%.

However, gains appear to be slowing slightly ahead of the end of the summer season. According to the analysts, domestic leisure traffic has been declining as a result, while international premium traffic remains strong.

FedEx (+0.3%) gained marginally after its Board of Directors declared a quarterly cash dividend of USD0.12 per share on FedEx Corp common stock. The dividend is payable 01-Oct-2010 to stockholders of record at the close of business on 10-Sep-2010.

UPS (+0.2%) also made a slight gain for the day. The freight carrier last week reduced its estimate of the number of pilots it expects to furlough through 2011 from 300 to 230 as part of a USD1.4 billion cost-cutting initiative.

JetBlue sells out of All You Can Jet Pass

JetBlue (-2.1%) has been declining as of late despite announcing last week it sold out of its All You Can Jet Pass a day earlier than expected. Last year, the pass sold out two days early.

It was also reported last week that the carrier is negotiating a codeshare agreement with American Airlines (-1.7%) that could be put into effect as soon as 1Q2011. The carriers announced plans in Mar-2010 to cooperate in New York and recently announced a reciprocal frequent flyer agreement.

Elsewhere, Allegiant (-5.1%) stock plummeted. The travel company’s stock has been gradually declining over the past few months from a price of USD51.77 at the end of May-2010, to USD38.83 now. 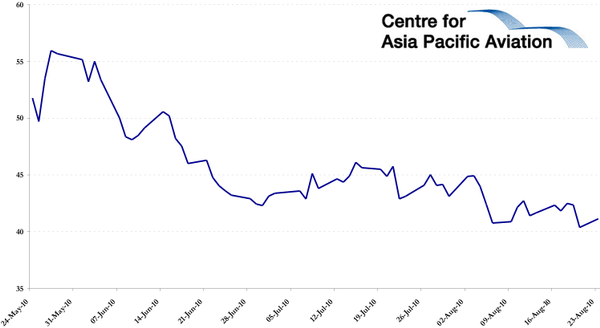 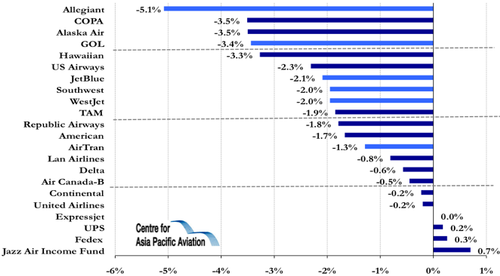