North and South American airline stocks advanced on Tuesday (12-Oct-2010) as the wider market made a slight gain. The Dow (+0.1%) rose after minutes from the US Federal Reserve’s latest meeting increased investor confidence that the bank will implement strategies to further stimulate the economy.

Republic Airways (+1.7%) gained after CEO Bryan Bedford stated the carrier’s subsidiary, Frontier Airlines, is open to a marketing deal with another major carrier “to be successful in the long term”. Mr Bedford declined to identify any potential partners for the carrier.

Bureau of Transportation Statistics (BTS) reported 81.7% of flights arrived within 15 minutes of the posted time in Aug-2010, the second best August on-time results for the carriers since BTS started recording the data in 1995.

Carriers with the highest on-time arrival rates were:

However, the carrier with the lowest on-time arrival rates included

BTS also stated US airlines reported only one flight in Aug-2010 with a tarmac delay of more than three hours, compared with 66 flights in Aug-2009, with no change in the rate of cancelled flights.

Elsewhere, US Airways (+6.1%) climbed after the carrier stated last week it expects to be profitable this year. The carrier was one of the top 10 percentage gainers on the New York Stock Exchange for the day. Air Canada (+4.4%) also rose. 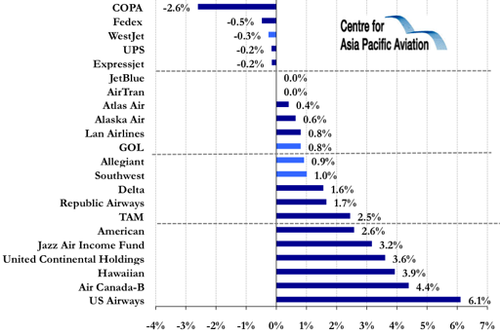