North and South American airline stocks took another battering on Wednesday (11-Aug-2010) after the US Federal Reserve stated information received since the Federal Open Market Committee met in Jun-2010 "indicates that the pace of recovery in output and employment has slowed in recent months". The Dow (-2.5%) fell to its lowest level in three weeks as a result.

ExpressJet was the only carrier that did not to fall for the session, remaining flat, after reporting a net loss (including special items) of USD18.6 million for the three months ended 30-Jun-2010, compared with a net loss of USD13.1 million in the previous corresponding period.

Calling it a new, more modern look, United Airlines (-6.5%) and Continental Airlines (-5.8%) unveiled new branding for the combined entity to come from the merger expected later this year.

The airline's livery will adopt Continental's colours and design – including the blue-gold-white globe on the tail which has represented Continental's brand image since 1991 – combined with the new-style UNITED name on the fuselage. 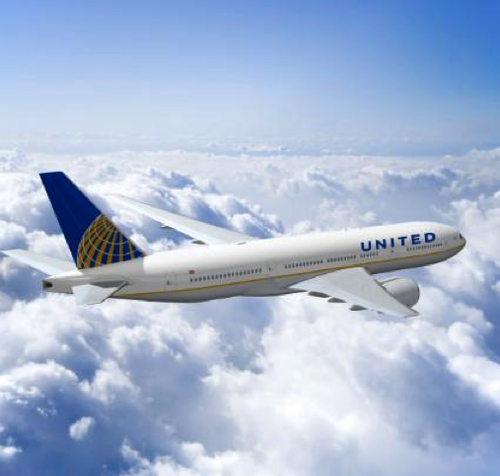 American Airlines (-4.9%) was also down. According to Benzinga.com, investors had been picking up shares in the carrier as “risk appetites increased”, placing the stocks in a technical uptrend. As a result, American moved past its 50-day moving average at the start of Aug-2010. However, the analysts stated this risk appetite appears to have diminished.

Elsewhere, Hawaiian Airlines (-8.1%) continued its recent decline, suffering the largest fall of the day. Republic Airways (-6.6%) and Alaska Air (-6.1%) were also down significantly. 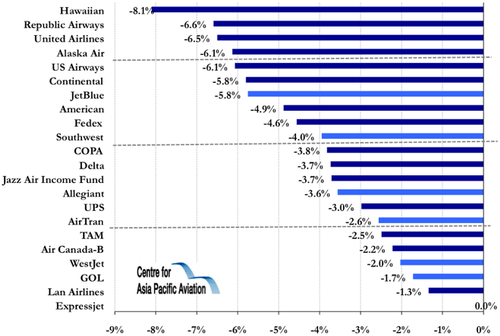