Air Canada stocks leapt as investors sniffed the prospect of avoiding bankruptcy; the machinists union members had a change of heart, with 10% changing their votes on the second attempt. More than 60% approved management’s proposal to defer pension payments until next year.

TAM and GOL stocks were again very much in favour. Stronger traffic statistics and a feeling that the worst of the downturn is over in South America have given them a real boost.

See separate report: American Airlines loses USD300 million: if things are getting better, you can’t see them from here

This was against a loss of USD298 million in 2Q2008. It is hard to remember a time when such a bad result – during a peak earning season – would be rewarded with a significant gain in market cap.

And as for the outlook, “the challenges for our industry and company have continued throughout 2009,” said AMR Chairman and CEO Gerard Arpey. “With ongoing global economic weakness and the resulting effect on travel demand, revenues are down sharply from a year ago. The spot price of oil, while much lower than this time last year, has risen since early this year and remains volatile.” 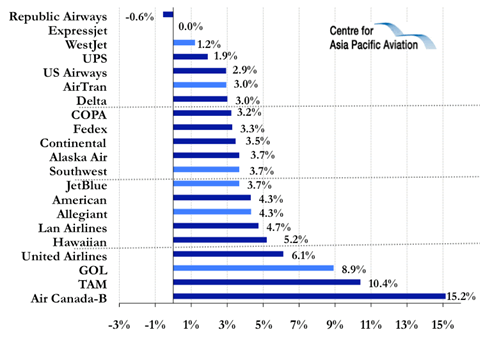