Taiwan’s EVA Air is looking to bolster transit traffic from Southeast Asia to help support further growth in the North American market. A newly expanded codeshare agreement with Singapore Airlines (SIA) covering all six of EVA’s North American routes along with a significant expansion of its trans-Pacific operation should generate an increase in the Taiwanese carrier’s share of the highly competitive Southeast Asia-North America market.

Expansion of EVA’s Southeast Asian operation is not expected as the airline is focusing regional growth on the mainland China and Japanese markets. But EVA needs a change in its traffic mix on Southeast Asian routes to include more connecting passengers as competition in the local Taiwan-Southeast Asia market intensifies following the launch of Taiwan’s first LCCs, although they are for now small.

EVA to add eight weekly frequencies to North America in 2015

EVA CEO Austin Cheng told CAPA at the Nov-2014 Association of Asia Pacific Airlines (AAPA) Assembly of Presidents that Houston will be EVA’s only new long-haul destination in 2015. But he said EVA also intends to increase service to Seattle in 2015 from five weekly flights to daily as well as increase both Toronto and Vancouver from four to five weekly flights.

As a result EVA expects to operate 63 weekly passenger flights to North America by mid-2015 compared to 55 currently. Los Angeles, which is EVA’s second biggest route after Hong Kong based on seat capacity, is currently served three times per day. San Francisco is served with two daily flights and New York JFK with one daily flight. Houston will initially be served with three weekly flights from 19-Jun-2015, increasing to four weekly flights from 1-Jul-2015.

EVA currently has almost 36,000 weekly seats in the Taiwan-North America market, representing an increase of about 23% compared to Dec-2013, according to CAPA and OAG data. North America currently accounts for about 15% of the carrier’s total international seat capacity and almost 50% of its international ASKs. The ASK share will surpass 50% in Jun-2014 after all the increases are implemented. 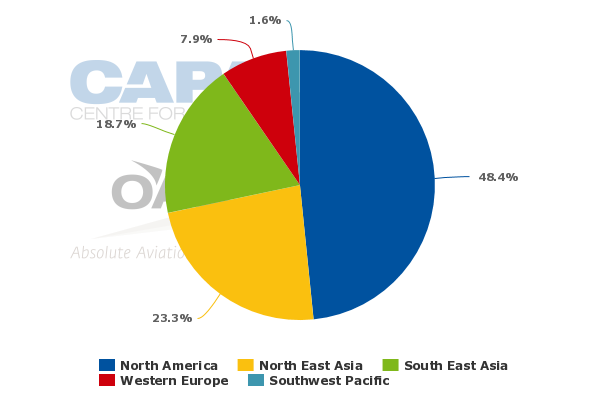 EVA already accounts for a leading 59% share of seat capacity between Taiwan and North America, according to CAPA and OAG data. Rival China Airlines (CAL) has a 35% share while EVA codeshare partner United, which resumed services to Taipei in Mar-2013 (with daily service from San Francisco), accounts for the remaining 6%. CAL has been improving its position in the North American market with new 777-300ERs, generating greater sustainability.

EVA also competes with other North Asian carriers and Delta Air Lines for traffic between Taiwan and North America as a large portion of this market opt for one-stop products. Delta, Cathay Pacific, All Nippon Airways, Japan Airlines, Asiana and Korean Air all have a large presence in the indirect Taiwan-North America market. (Delta serves Taipei with a one-stop product via Tokyo Narita.) 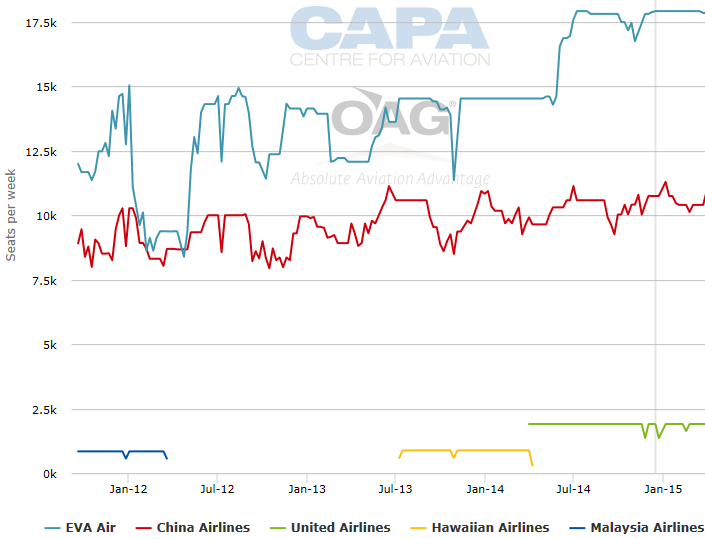 Along with operating five of EVA’s six North American routes, the 777-300ER fleet is used on three of the carrier’s four European routes and some regional services within Asia. But as the fleet grows by 14 aircraft over the next three years the focus is on North America rather than Europe.

Mr Cheng said EVA may increase Paris if it receives more traffic rights. With the rest of the European network the focus is now on recovery as EVA has been impacted by the political instability in Thailand this year, although even before this Europe has not been a strong performer. Traffic is limited while Taiwanese carriers have low visibility.

In addition to four 777-300ERs, EVA plans to take delivery of six A321s in 2015 with four being used to replace MD90s and two for growth. EVA currently has four remaining MD90s in its fleet, according to the CAPA Fleet Database. Its A321 fleet consists of 12 aircraft with another 12 on order.

The A321 fleet is used on regional flights within Asia along with A330s. EVA executives said only one new Asian route is planned for 2015, Kaohsiung to Osaka. EVA is planning to launch one daily flight from Kaohsiung to Osaka on 5-Feb-2015 using A321s. EVA already serves Osaka from Taipei while Kaohsiung in southern Taiwan is served from Tokyo. Kaohsiung-Tokyo Narita was launched in 2013 and has been successful, giving EVA confidence to offer more direct services between Taiwan’s second largest city and Japan.

Japan is EVA’s largest international market based on current seat capacity. There is large demand from each market and there has been growth following an open skies agreement. 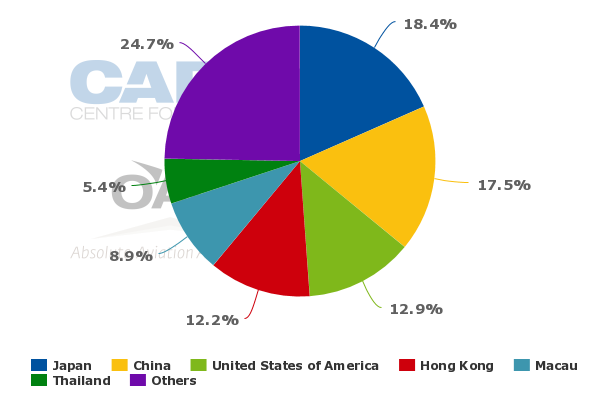 A daily schedule helps attract business and corporate traffic. Mr Cheng pointed out that EVA’s performance in the New York market improved after the airline upgraded Taipei-JFK to daily in Jun-2014.

A daily schedule also helps with sales in connecting markets. Most of the connecting destinations EVA offers from North America are already served daily.

Transit passengers currently account for 50% of EVA’s total traffic. While demand in the local Taiwan-US market has been increasing, driven by Taiwan being added to the US visa waiver programme in late 2012, EVA will need to continue increasing sixth freedom traffic to support its continued expansion in North America. Mainland China is barely a play on EVA's North American network. EVA is only able to carry connecting traffic into mainland China, but with Cross-Strait routes being so high-yielding with excess demand, there is little incentive to offer a low-yielding connecting seat. At the Star Alliance CEB meeting in Delhi, Mr Cheng confirmed mainland China accounts for a low single-digit share of North American traffic.

EVA currently has over 44,000 weekly return seats to Southeast Asia, giving it about a 21% share of total seat capacity between Taiwan and Southeast Asia. Unlike North America, where there is fairly steady demand year-round, EVA’s Southeast Asian schedule fluctuates depending on the time of year with more frequencies and in some cases higher capacity aircraft being used during peak periods. 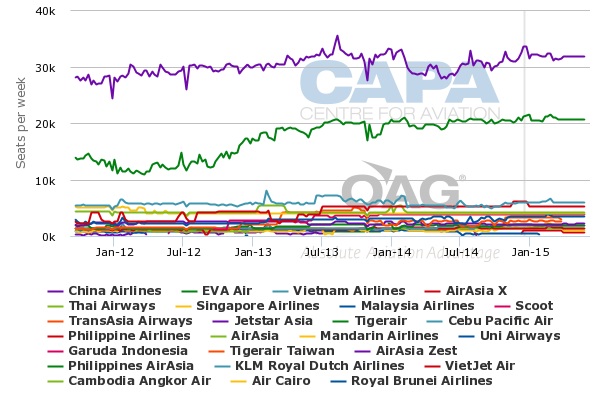 EVA has increased capacity to Southeast Asia over the last two years, enabling it to narrow the gap slightly with market leader China Airlines. But the focus over the next year or two is more on expanding in North Asia and North America.

For example EVA is not currently looking at resuming service to Yangon, which it briefly served in late 2012 and early 2013. EVA instead is focused on its seven existing Southeast Asian markets of Cambodia, Indonesia, Malaysia, Philippines, Singapore, Thailand and Vietnam. It currently relies on codeshare partner Bangkok Airways to provide offline access to Myanmar as well as Laos, Siem Reap in Cambodia and secondary destinations in Thailand.

EVA Air does not yet work with Thai Airways, which could potentially also provide offline access to Laos, Myanmar and secondary destinations in Thailand. EVA currently only codeshares with five other Star members: Air China, All Nippon Airways, Asiana, SIA and United Airlines. Bangkok Airways is one of four non-Star partners; the others include Hainan Airlines, Hong Kong Airlines and Shandong Airlines.

EVA is looking to pursue codeshares, including with more Star members, and strengthen existing codeshares. EVA joined Star in Jun-2013.

EVA on 12-Dec-2014 implemented an expanded codeshare with SIA as EVA began carrying SIA’s code on all six of its North American routes – Los Angeles, New York, San Francisco, Seattle, Toronto and Vancouver. The additional codeshares came exactly one year after EVA and SIA began codesharing between Taipei and Singapore, which is operated by EVA with one daily flight and by SIA with two daily flights.

SIA also codeshares to North America with ANA via Tokyo Narita; with Air Canada via Frankfurt and London; and with Virgin Atlantic via London Heathrow. In addition SIA uses two US low-cost carriers, JetBlue and Virgin America, for domestic connections in the US, as it does not have a codeshare relationship with Star member United. SIA currently serves four North American gateways with its own metal: Houston via Moscow, Los Angeles via Tokyo Narita, New York via Frankfurt and San Francisco via Hong Kong and Seoul.

Some of SIA's partnerships have been weak with low volumes of traffic. It is early days for the EVA partnership, but this one seems stronger. Of SIA’s North Asian partners only with EVA is SIA codesharing to all of its partners’ North American gateways, an indication of the importance SIA is giving its expanded relationship with EVA. The ANA and Asiana codeshares are each limited to three destinations in North America: Chicago, New York and Washington Dulles for ANA and Honolulu, Los Angeles and Seattle for Asiana.

EVA does not yet codeshare with SIA beyond Singapore although sees using SIA for offline markets as a future possibility. SIA and regional subsidiary SilkAir could improve EVA’s presence in Southeast Asia and South Asia as well potentially in Europe, where EVA currently does not have any partner.

The focus for SIA is on the Singapore market, which has sizeable demand – including in premium cabins – to North America. Markets beyond Singapore are less likely a focus since those would require two stops.

Partnerships and connections to North America are particularly important to EVA’s Southeast Asia operation as the Taiwan-Southeast Asia market becomes increasingly penetrated by LCCs. LCCs currently account for about 21% of seat capacity between Taiwan and Southeast Asia, according to CAPA and OAG data. The LCC penetration rate in this market will increase significantly as Taiwanese LCCs expand.

Southeast Asian LCCs have been serving Taiwan for some time but Taiwan did not have a local LCC until the Sep-2014 launch of CAL subsidiary Tigerair Taiwan. TransAsia subsidiary V Air launched services on 17-Dec-2014, becoming Taiwan’s second LCCs. As CAPA previously outlined, both start-ups are focusing primarily on Southeast Asia because at least for now most North Asian markets are limited because of bilateral constraints.

EVA is not too concerned about increasing LCC competition in Taiwan-Southeast Asia market as it sees a growing network role for its Southeast Asian services. EVA will compete with Taiwan’s new LCCs for some local passengers but does not believe it needs to follow CAL and TransAsia in establishing an LCC subsidiary. Mr Cheng told CAPA EVA is not convinced Taiwanese LCCs can succeed, pointing out limitations in Taiwan including airport curfews, no domestic market and the lack of low-cost terminals.

EVA will eventually need to reconsider a dual-brand strategy

EVA inevitably will need to revisit its strategy for LCCs. Over the years other Asian full-service airlines have cited similar constraints in their markets but later adjusted their strategy as LCCs succeeded and expanded rapidly.

But for the short to medium term EVA should be able to thrive and grow without playing the LCC card. The Taiwan-mainland China cross-border market is highly profitable although growth could dilute the handsome yields. Taiwan-North America is a growing market and there are also opportunities to increase its slice of the Southeast Asia-North America market – although competition in this market is intense as there are a myriad of one-stop options.

Focusing expansion in North America is a sensible strategy. Whether EVA will be able to rely on network traffic to maintain its presence in Southeast Asia as LCC competition intensifies is more questionable.