Concern that Greece’s debt woes could spread to the rest of Europe is dragging oil prices lower, with the potential for a lower Euro weighing on oil markets. Oil prices dipped below USD76 per barrel briefly during inter-day trading yesterday, ending at a little about USD77, having spent most of the previous week above USD85 per barrel. Meanwhile, the US dollar rose above EUR1.26.

Also prompting the decline are continuing increases in US oil inventories, with US consumption not rebounding as analysts expected. The US Energy Information Administration reported US crude oil stocks passed 360 million barrels at the end of Apr-2010, expanding by 2.8 million barrels for the week to 30-Apr-2010, four times market expectations. Gasoline consumption was lower than expected, although distillate stocks rose less than anticipated.

Short-term uncertainty has dominated oil pricing over the past few weeks, with Europe’s airspace disruptions and now the Greek debt issue prompting rapid drops in prices. A cooling European recovery, and anti-inflationary measures in China, have also pushed expectations lower.

Oil prices finished the week to 04-May-2010 at USD82.73 per barrel. The price on the NYMEX has since dropped below USD80 per barrel again, but is still close to 50% higher than the same period 12 months ago.

The Energy Administration only updates prices to 4-May-2010, so the following graph does not show yesterdays' steep drop, which puts price levels back to those of mid-Feb-2010. 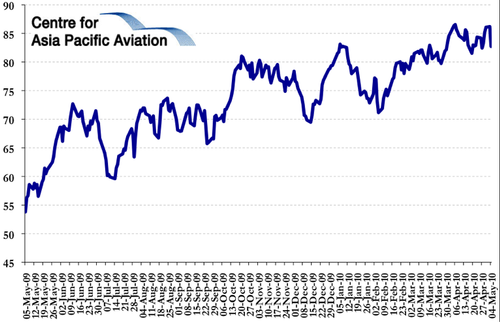 Jet fuel prices were mixed. Amsterdam and Los Angeles prices gained only marginally over the week, while New York and US Gulf Cost prices jumped by 2.1% and 3% respectively, both approaching US240 cents per gallon in early May-2010. Singapore prices rose 3.9%, although prices are still down around US230 cents per gallon.

These can be expected to come off somewhat after yesterday's oil price falls. 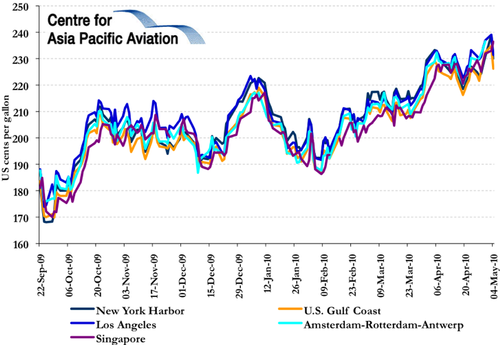