Europe's aviation capacity recovery to go into reverse in 4Q2022

The capacity recovery in Europe has progressed with each successive quarter from 27% of 2019 levels in 1Q2021 to the current projection of 87% for 3Q2022. However, this figure for the current quarter – soon drawing to a close – is only a little ahead of the 84% achieved in 2Q2022.

Moreover, capacity projected for Europe in 4Q2022 has been trimmed from 88% to 85% over the past two weeks. This points to a modest reversal of the recovery trend from the current quarter to the final quarter of this year.

In the week commencing 5-Sep-2022, total European seat capacity is scheduled to be 32.1 million, according to OAG schedules and CAPA seat configurations.

This week's total seat capacity for Europe is split between 7.9 million domestic seats, versus 8.4 million in the equivalent week of 2019; and 24.2 million international seats, versus 28.5 million.

International seat capacity is down by 15.1% versus 2019 – unchanged from last week. 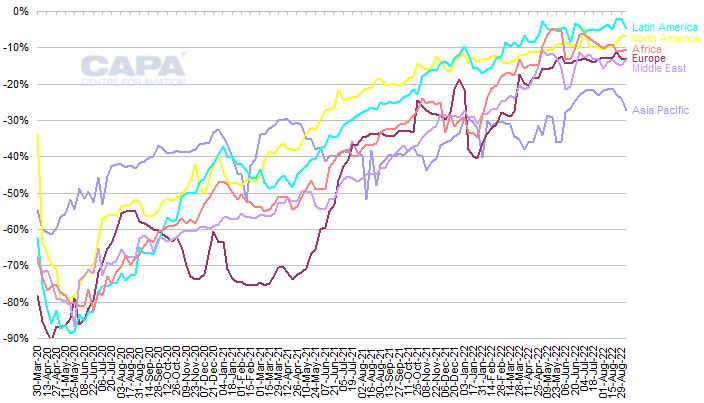 The improvement is continuing in 2022 so far.

Economic conditions may be weakening…

…but the slowdown is "job-rich"

However, IATA has recently highlighted that many countries are experiencing a "job-rich" economic slowdown. This relatively unusual set of circumstances is characterised by low unemployment rates and high levels of job vacancies.

The countries with falling unemployment included 21 European nations, among which were all five of Western Europe's big nations (Germany, UK, France, Italy and Spain) and the Nordic countries (Denmark, Sweden, Norway, Iceland and Finland), and Turkey.

The early phase of the COVID-19 pandemic led to a significant drop in vacancies as jobs were lost and/or furloughed. However, the ratio of vacancies to unemployed people has recovered to exceed its pre-pandemic level in many countries, including the UK, Germany, Portugal, Austria, Switzerland and Sweden. 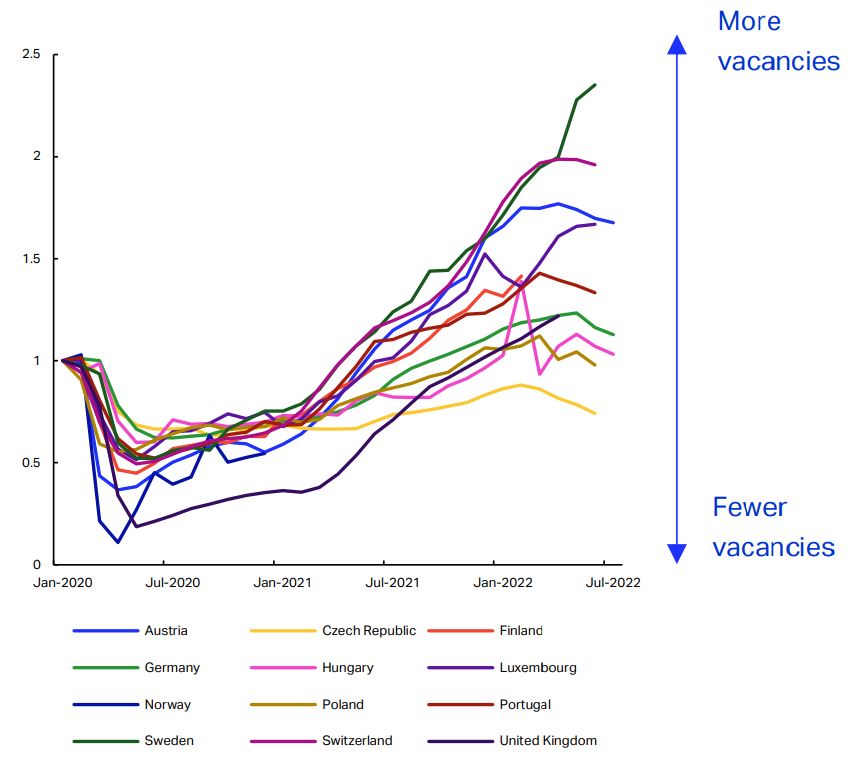 IATA states that more people working and earning is "unambiguously good news" for both the global economy and the air transport sector.

Indeed, low levels of unemployment should help to mitigate the negative impact of any continued economic weakness.

…but a tight labour market has limited Europe's airlines operationally

However, the tight labour market has been a contributory factor in limiting airlines' ability to fulfil originally planned schedules this summer.

The reduction to the 87% now scheduled for 3Q2022 owes little to any ongoing concerns about COVID-19 transmission and much to aviation supply chain constraints – the most acute being a shortage of labour.

Moreover, if wages do not keep pace with rising inflation – in other words, if real wages fall – then even having high numbers of people in work may not generate demand for air travel that returns to pre-pandemic levels for a while yet.