The last of Europe's stock market-listed airlines recently reported financial results for 2014, providing the opportunity to compare levels of profitability. Ranking them by operating margin, there is a wide range of performance from healthy double digit to negative figures.

LCCs typically performed better than legacy airlines. Most of the higher margin airlines improved in 2014, while most of those at the lower end of the scale suffered a fall in margins. Convergence of business models does not show itself in convergence of financial performance.

Beyond the listed airlines, Europe has a large number of mainly small and unprofitable airlines, which drag down the aggregate margin of the continent's airline sector. Europe's traffic growth and load factors are relatively healthy by world standards, but its margins are held back by its fragmented market structure.

Further meaningful consolidation in Europe is likely to be difficult as long as restrictions remain on market access and ownership and control. For now, the priority for Europe's airlines must remain cost control, in particular labour restructuring.

Ryanair had the highest 2014 operating margin among listed European airlines

For simplicity's sake, we present a comparison of operating margins, which measure operating profit as a percentage of revenue for Europe's listed airlines (see chart below). For our purposes, operating profit is EBIT (earnings before interest and tax) before exceptional charges for restructuring and other one-offs. It also excludes non-operating gains such as asset disposals. 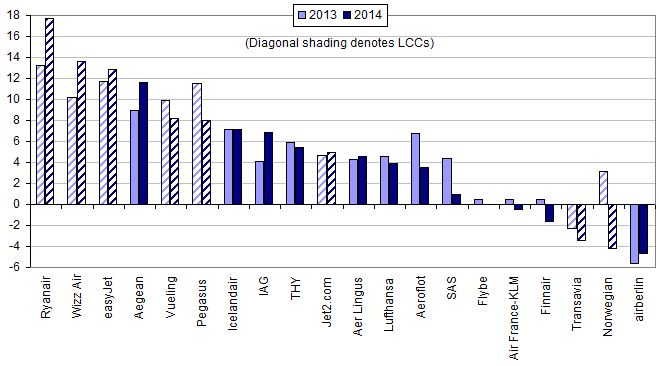 On this measure of profitability, Ryanair was the most profitable European airline in 2014 (and in 2013). The least profitable among this sample was airberlin (for both 2013 and 2014).

The results provide considerable ammunition for those who argue that the LCC model is superior to the legacy model. Convergence and hybridisation notwithstanding, LCCs are generally more profitable. Five of the top six and all of the top three by operating margin are LCCs. Moreover, all of the top three improved their margin in 2014 versus 2013.

Ryanair (whose financial year ends in March, although we show calendar year margins in our chart) benefited from its core strength of low costs and combined this with an improved customer service offer to drive up yield, load factor and, hence, margin. Wizz Air, already (like Ryanair) an ultra-LCC, managed its unit cost down further while also raising its unit revenues. EasyJet continued to take advantage of its network of primary airports and its lead over other LCCs in terms of initiatives towards business travellers and customer service.

Although still creditably profitable, Vueling and Pegasus recorded lower margins in 2014 than in 2013. Vueling experienced some growing pains at it new Rome Fiumicino base. Pegasus was affected by currency factors and increased competition from Turkish Airlines at its Istanbul Sabiha Gokcen hub. Nevertheless, Pegasus remained more profitable than Turkish, whose margin also dipped in 2014.

Two of the eight LCCs in the list were even loss-making in 2014. These were Norwegian, whose profitability has suffered since launching a long haul network and Transavia, whose losses are attributed by its parent Air France-KLM to the ramp up of routes from France (apparently ignoring the fact that most other LCCs are also ramping up routes quite profitably).

The only non-LCC to break into Europe's top six airlines by operating margin is Aegean Airlines, which is also the only FSC to record a double digit margin in 2014, helped by strong cost control and the successful absorption of its Olympic Air acquisition.

Among the FSCs, four improved their margin in 2014, while six suffered a drop in margin. Icelandair stayed at the same level and retained its position as the most profitable niche flag carrier in Europe.

IAG's margin improvement was mainly due to the restructuring and turnaround of Iberia and this also helped it to consolidate its place as the most profitable of Europe's Big Three legacy groups (although it was still only at number eight in the list overall).

IAG is reaping the rewards of confronting labour restructuring, in particular, earlier than either of the other two. Both Lufthansa and Air France-KLM suffered damaging strikes in 2014, which not only weighed on their results for the year, but also highlighted the ongoing challenge of seeking strategic change while ensuring that employees are comfortable to move in the same direction. Although Lufthansa reported an increased margin according to its audited accounts, its margin would have been lower year on year without a change in depreciation policy in 2014.

Aer Lingus now represents the middle of the road of Europe's airlines. Its margin improved very slightly in 2014, but remained firmly in the middle of the pack, just as strategically it positions itself between the LCCs and the major network carriers. IAG, if successful in its bid for the Irish airline, should help Aer Lingus to make the next step up in profitability.

The Aeroflot group suffered a large drop in operating margin in 2014. Demand on its international network was weak as a result of the political situation in Ukraine in particular, which also indirectly led to the suspension of its first attempt at a LCC subsidiary, Dobrolet, which was targeted by EU sanctions. Aeroflot promptly launched a second LCC subsidiary, Pobeda.

SAS also saw a heavy fall in its margin, as a result of competitive capacity growth, sluggish demand and weak pricing, in spite of good progress with cost cutting. Finnair faced similar challenges and fell into an operating loss, underlining a disappointing year for the three Nordic airlines in the list.

Our analysis of the operating margins of European airlines highlights the wide range of results. Nevertheless, some broad conclusions can be drawn. While business models show some signs of convergence, financial performance is diverging. The bigger pan-European LCCs are typically higher margin businesses than the legacy airlines.

Moreover, the most profitable became even more successful in 2014, while the majority of the weaker performers suffered a decline in their margin.

This set of results excludes a long tail of small carriers with relative weak financial performance that are not stock market listed. Europe's airlines in aggregate combined to produce the second lowest EBIT margin among the world's regions.

According to IATA, only Africa was less profitable in 2014. North America jumped ahead of Asia Pacific, but these two regions have been the most profitable, measured by EBIT margin, since the recovery from the global financial crisis. Europe performed slightly better going into the crisis, but has consistently lagged the global average, and every region bar Africa, since 2009.

…but not because of weak traffic growth…

By contrast, North America's RPK growth has lagged the global average since the financial crisis. This slow growth in North America reflects tight capacity management, a factor in the region's improved margins. 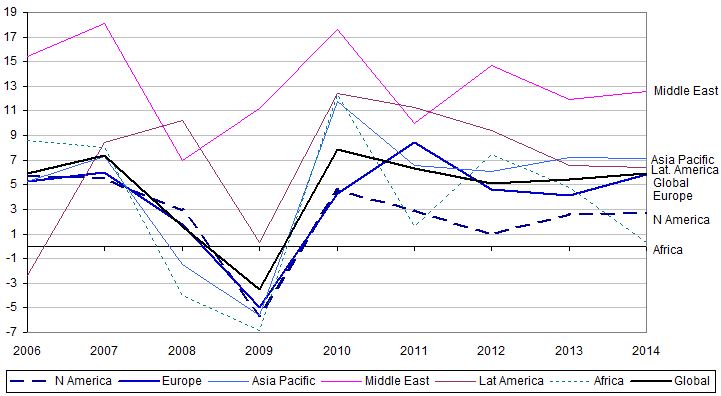 Neither is Europe's underperformance in margin terms due to load factor weakness. Indeed, although North America and Africa topped and tailed both the margin and passenger load factor rankings in 2014, there is no obvious relationship between these two variables for the other regions.

Europe has consistently had the second highest passenger load factor for several years, but this apparently has not helped its profitability. Asia Pacific's load factor was almost 4ppts below that of Europe in 2014, but its EBIT margin was more than 4ppts higher, according to IATA data. 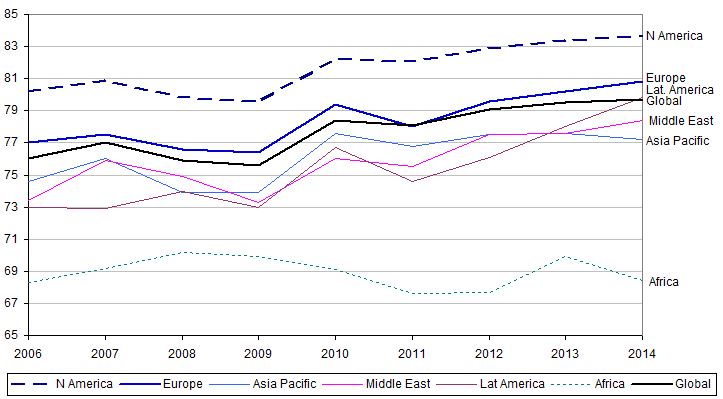 If Europe's persistently weak airline EBIT margins cannot be blamed on poor traffic growth or load factors, there must be something else holding the continent back. Our analysis of this question in Jun-2014 concluded that the fragmented nature of the European airline market was a significant factor in its low profitability.

This conclusion is further illustrated by the chart below, which shows the relationship between higher levels of market concentration and higher airline EBIT margins for the world's regions.

The chart plots a measure of market concentration, known as the Herfindahl-Hirschman Index (HHI), against IATA's forecast 2015 EBIT margin for each region. The HHI is calculated by squaring the percentage market share (based on seats) of each firm in the market and summing these numbers. The index would be 10,000 if a market were a pure monopoly (100 squared). It shows that North America is the most concentrated airline market and also the most profitable, while Africa is the lowest on both measures. Europe's low expected 2015 margin is consistent with its low level of market concentration.

It is worth mentioning that Asia Pacific appears as an outlier in the chart below, displaying a much higher forecast margin than might be expected from its low market concentration. This is because it is not a single market, but really consists of a number of distinct sub-regional markets, each of which is more highly concentrated than Asia Pacific as a whole. 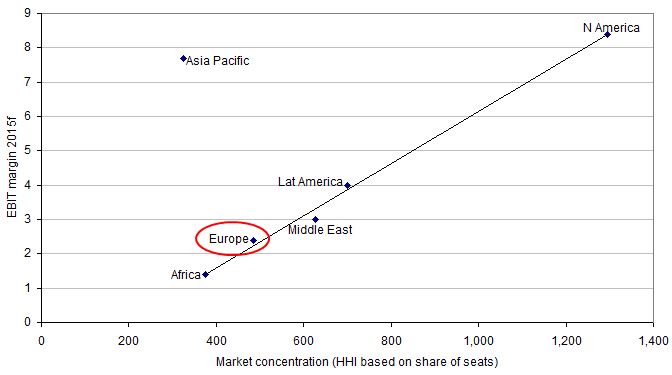 Of course, there are other reasons why European airline profit margins are lower than those of North America. In particular, Europe's legacy carriers have been slower to confront labour restructuring than their North American counterparts, whose progress in this respect was given a considerable boost by a series of Chapter 11 bankruptcies resulting in court-sanctioned changes to employment contracts.

Nevertheless, as the chart above demonstrates, Europe's fragmented market structure is an important factor in its low profitability. Global restrictions on market access and on foreign ownership and control are barriers to consolidation globally, but these restrictions effectively have a greater impact on Europe than on North America.

Europe's airline sector, particularly the legacy carriers (whose profits are typically low), is more exposed to intercontinental routes than are North American airlines. EU liberalisation of market access and ownership and control does not do much for consolidation that reaches beyond the bloc's borders. The first decade or so of this century witnessed some significant moves in European airline consolidation, with the formation of Air France-KLM, the Lufthansa Group and IAG, but the region has seen little progress since then.

Another form of consolidation, resulting from the exit of weaker players, continues to inch forward. However, this has been slowed down by a wave of acquisitions of life-saving minority stakes by non-European airlines in European airlines that may otherwise have failed.

Europe's airline sector must press regulators to remove barriers to further consolidation, but this may be a lengthy process. Meanwhile, it is imperative that European legacy airlines redouble their efforts to push through labour restructuring in order to improve their profitability.