According to schedules from OAG combined with CAPA Fleet Database seat configurations, in the week commencing 15-Jun-2020 seat numbers in Europe are down by 81.6% year-on-year, which is 2.0ppts narrower than last week's 84.7% drop.

This describes the current picture; more important for European aviation is the outlook. Schedules filed by airlines for the rest of the summer are regularly being trimmed, but still overstate the likely reality, a problem that has prompted CAPA to develop its own capacity forecast models.

A disadvantage for Europe compared with Asia Pacific and North America in the initial domestic-led recovery phase is the small scale of its domestic markets. For this reason, it is vital for Europe to coordinate and facilitate access to intra-Europe international markets, which make up half of the continent's seats.

Total European seat capacity is scheduled to be 6.6 million in the week of 15-Jun-2020.

This is the 13th week of very heavy double digit percentage (more than 50%) declines in seats.

Nevertheless, it continues the modestly improving trend since the period between mid April and late May, when the underlying rate of reduction was in the region of 90%, after adjusting for a false start in Ryanair's schedules data.

Latin America continues to have the deepest cut among world regions

Latin America capacity is now down by 81.6% this week, the only region with deeper cuts than Europe. 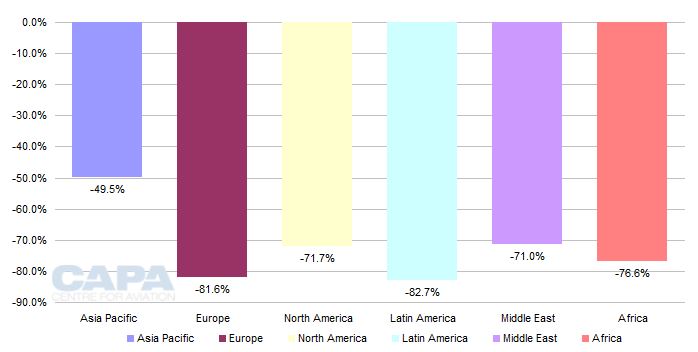 All regions have taken an upward step this week

For the first time since the crisis began, the year-on-year rate of decline in seat capacity has narrowed in every world region this week.

In addition, all are experiencing a week-on-week increase. 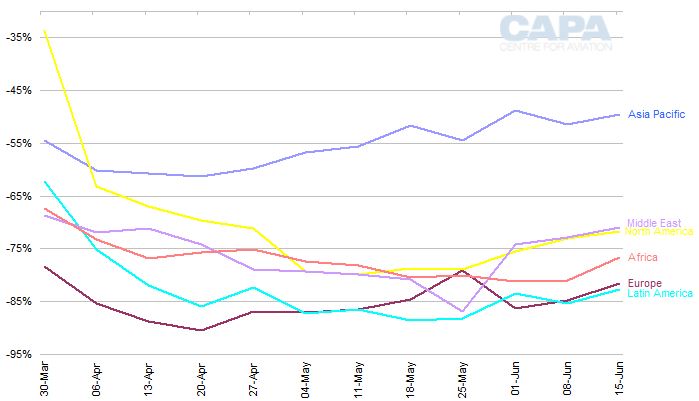 Once more, the upward arm of the U-shaped recovery depicted by European airline schedules data is widening across the summer season.

Capacity for Jun-2020 is now projected to be down by 82% year-on-year, compared with a 77% decline anticipated last week. The outlook for Jun-2020 capacity implied by filed schedules data has fallen by 65% over the past three weeks and by 24% since last week.

Projected capacity for Jul-2020 has fallen by 17% compared with last week's schedules data and is now expected to be 37% below Jul-2019 levels.

Projected capacity for Aug-2020 has been trimmed by only 1% since last week and is projected to be 15% below last year.

Projected Sep-2020 seat numbers have been lowered by 3% since last week, but are still expected to be within 8% of Sep-2019 levels. 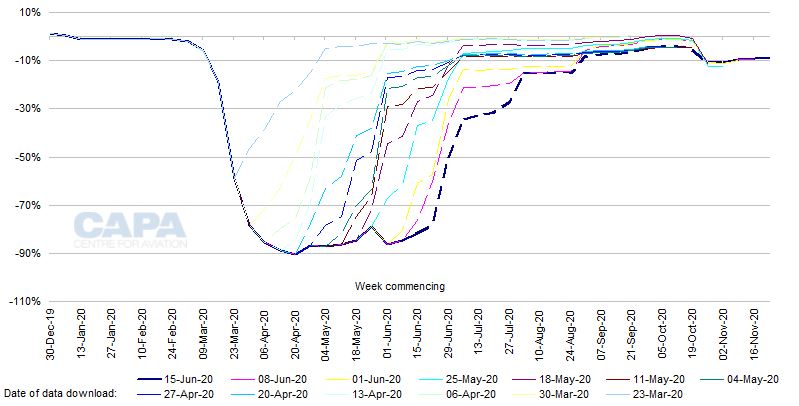 As has been frequently pointed out by CAPA in its analysis of European airline capacity in the coronavirus crisis, there clearly continues to be considerable scope for further reductions to schedules filed for these peak summer months.

The limitations of using schedules data filed by airlines to gain a view of the capacity outlook over the rest of the year remain considerable.

As a response, CAPA has developed a series of interactive data models designed to build capacity projections in key markets around the world.

Models for the UK, France, Germany, the USA, India, Japan, South Korea and other countries are under preparation.

Less than a quarter of European seats are domestic…

For Europe, an important factor in the recovery for airlines will be the extent to which it can facilitate the return of short/medium haul international routes within Europe.

In Asia Pacific, the initial stages of the recovery have mainly been led by domestic markets. This pattern is likely to be repeated elsewhere.

However, in 2019 less than a quarter (23.9%) of seats to/from/within Europe were domestic, according to data from OAG and CAPA.

By contrast, domestic markets accounted for the majority of seats in the world's two other leading aviation regions.

…versus a majority of seats in Asia Pacific and North America

The much higher share of domestic seats should give Asia Pacific and North America an advantage over Europe in the domestic-led recovery phase.

But a further 50% of European seats are international within Europe

That said, Europe has a kind of secret weapon in this regard.

In addition to the 23.9% of European seats that were domestic in 2019, a further 50.3% of seats were on international routes within Europe.

This means that a clear majority of seats are internal to Europe. 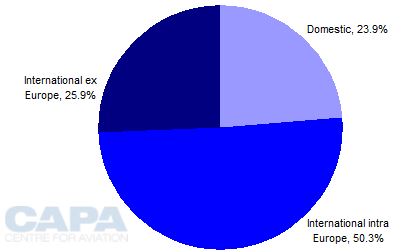 Europe must coordinate and facilitate access to intra-Europe international markets

The internal segment of the European Union's single aviation market, when functioning normally, is very similar to an enlarged domestic market.

In effect, it broadly pools the domestic markets of EU member states (and of other countries in the European Common Aviation Area) and the international markets between members into one market.

However, the COVID-19 crisis has caused a fragmentation of the single aviation market, as travel restrictions were imposed unilaterally and with different timings and different levels of restriction.

Access to the intra-European segment of the international market will be crucial to Europe's airlines in the recovery phase, since purely domestic markets are small.

This highlights why it is vital for Europe, or at least the European Union, to increase the level of coordination in its approach towards the lifting of travel restrictions and hygiene standards in the recovery.