Europe's airline capacity climbs, but the schedules outlook is fiction

In the week commencing 8-Jun-2020, seat numbers in Europe were down by 84.7% year-on-year, according to schedules from OAG combined with CAPA Fleet Database seat configurations, which is 1.5ppts narrower than last week's 86.3% drop.

Unless there is a second wave of the COVID-19 pandemic, Europe appears to have moved beyond the very worst of the capacity cuts. Nevertheless, it is still at a very low level of capacity.

Moreover, schedules data for the rest of the summer 2020 season are still projecting unrealistically high levels of capacity. For example, OAG/CAPA data for the week of 6-Jul-2020 project seats at 89% of 2019 levels. This is a fiction compared with announced plans from leading European airline groups to operate between 20% (Air France-KLM) and 60% (Wizz Air) of last year's capacity in 3Q2020.

Total European seat capacity is scheduled to be 5.5 million in the week of 8-Jun-2020.

This is the 12th week of very heavy double digit percentage (more than 50%) declines in seats.

Nevertheless, it is a modest improvement from the period between mid April and late May. During that period, the underlying rate of reduction was consistently in the region of 90%, after adjusting for a false start in Ryanair's schedules data.

Europe and Latin America have been trading places as the region with the heaviest year-on-year cuts in recent weeks. Europe returned to the bottom last week, but Latin America takes over this position again this week.

Last week, Asia Pacific seat numbers had dropped by 48.8% year-on-year, at that point making it the first region to recover more than half of its level a year ago in 2019, but it has taken a modest downward step this week. 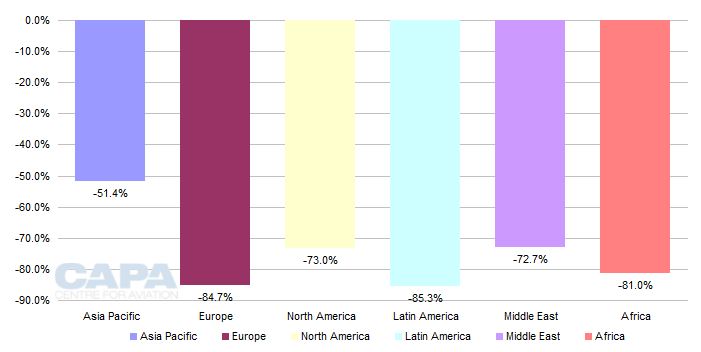 Capacity in Asia Pacific and Latin America is falling at a slightly faster rate this week than last week, but all other regions have narrower cuts this week.

Year-on-year percentage change in passenger seat capacity by region: week of 30-Mar-2020 to week of 8-Jun-2020 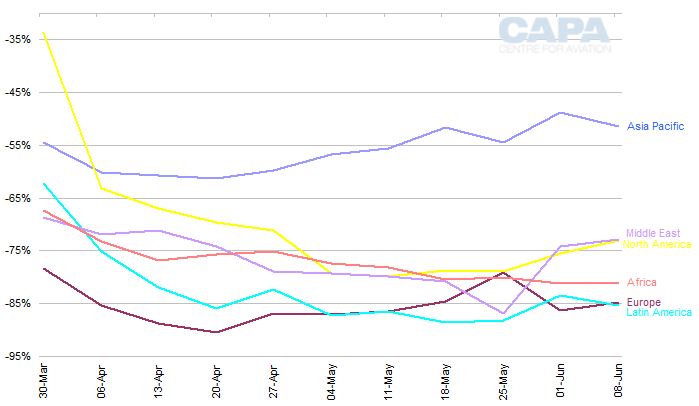 The U-shaped recovery has widened again

Once more, the upward arm of the U-shaped recovery depicted by European airline schedules data is widening across the summer season.

Capacity for Jun-2020 is now projected to be down by 77% year-on-year, compared with a 71% decline anticipated last week. The outlook for Jun-2020 capacity implied by filed schedules data has fallen by 64% over the past three weeks and by 20% since last week.

Nevertheless, it still has scope to fall further, based on capacity levels announced by leading European airlines.

Projected capacity for Jul-2020 has fallen by 9% compared with last week's schedules data and is now expected to be 25% below Jul-2019 levels.

Projected capacity for Aug-2020 has been trimmed by 3% since last week and is projected to be 15% below last year, while Sep-2020 seat numbers are still expected to be within 4% of Sep-2019 levels (unchanged from last week's outlook). 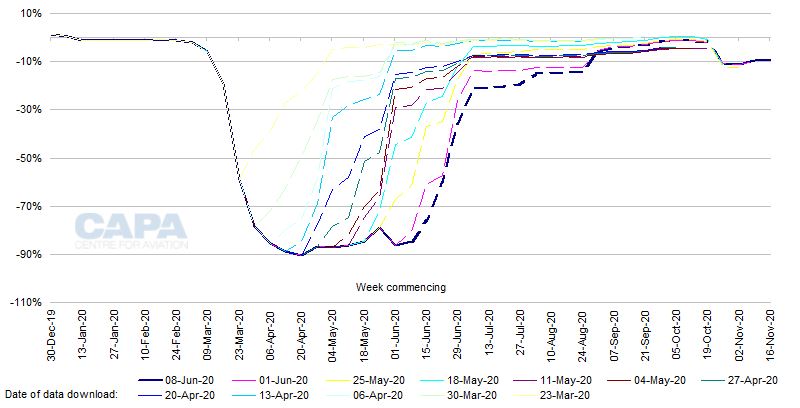 There is clearly still significant scope for further reductions to schedules filed for the peak summer months.

The chart below shows projected seat capacity as a percentage of 2019 levels for leading European airline groups in the week of 6-Jul-2020, based on schedules filed with OAG and CAPA seat data.

Where possible, it also shows the percentage of 2019 capacity that the companies themselves have said that they plan to operate in calendar 3Q2020 (i.e. July to September).

The OAG/CAPA projections for the first full week of Jul-2020 indicate all of these leading groups operating at least 70% of their 2019 capacity by then, ranging from 70.4% for IAG to 108.4% for Wizz Air Group.

Norwegian Group plans to operate only a minimal Norway short haul schedule until the end of Mar-2021 (implying well under 10% of its 2019 capacity), yet the OAG schedules filed indicate it operating 88.5% of its 2019 seat numbers in Jul-2020.

OAG/CAPA data for Lufthansa Group indicate 85% of last year's capacity in the week of 6-Jul-2020.

Aeroflot Group has said that it will gradually restore capacity in the domestic market from Jun-2020, from a total capacity at approximately 30% of last year in May-2020. This compares with 101.4% indicated by OAG schedules and CAPA seat data.

Turkish Airlines has not given its capacity plans by quarter, but expects its annual ASKs to be 55% lower than previously expected. This contrasts with seat capacity indicated at 103.6% of last year's level in the week of 6-Jul-2020.

Leading European airline groups: projected seat capacity as a percentage of 2019 levels for the week of 6-Jul-2020 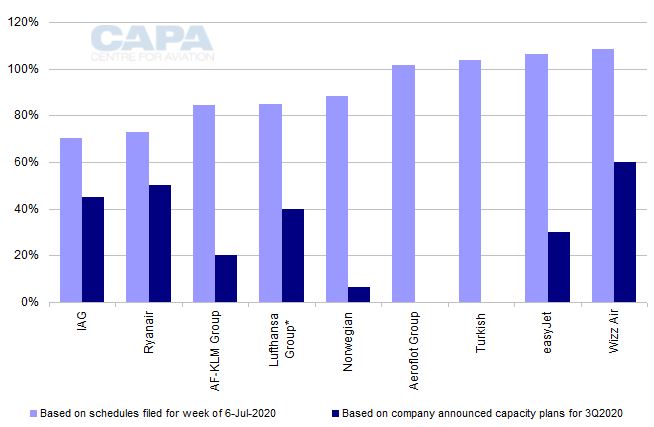 There have been consistent reductions in the capacity outlook with each week's update of schedules data from OAG. However, it is clear that the base of the U will further widen and the upward slope from the bottom will become more gradual.