Europe's active passenger jet numbers are falling again after a brief upturn in Dec-2020. Moreover, at 56% of its fleet, Europe is below the world average of 65% in service at 26-Jan-2021.

According to the CAPA Fleet Database, Europe's 3,520 passenger jets in service are 39% down year-on-year. Although three times the active fleet in the first lockdown at the end of Apr-2020, this is 14% down from the Aug-2020 recovery peak.

Europe's airline seat capacity is also underperforming the rest of the world. It is at only 25% of 2019 levels in the week of 25-Jan-2021, the lowest since Jun-2020. Seat capacity is down by more than active aircraft numbers, indicating depressed fleet utilisation.

Europe's LCCs have had a higher percentage of passenger jets in service than its legacy airlines since Jun-2020, but they cut this more heavily in the initial lockdown. Adjusting capacity to demand, often very rapidly, is much more embedded in the LCC mindset.

As national lockdowns continue and travel restrictions tighten, expect further near term cuts in Europe. Expect LCCs to lead the way when demand picks up.

In the week commencing 25-Jan-2021, total European seat capacity is scheduled to be 6.8 million, according to OAG schedules and CAPA seat configurations.

This week's total seat capacity for Europe is split between 3.1 million domestic seats, versus 7.2 million in the equivalent week of 2019; and 3.8 million international seats, versus 19.6 million.

For 14 weeks at the bottom of the regional league table ranked by the percentage decline in weekly seat numbers from 2019 levels, Europe is becoming further adrift from the other regions.

Africa has fallen back below the 50% level, after five weeks at or above it.

Only Europe and the Middle East have yet to reach the 50% threshold.

Middle East and North America were stable this week, while all other regions suffered a downward step in the trend. 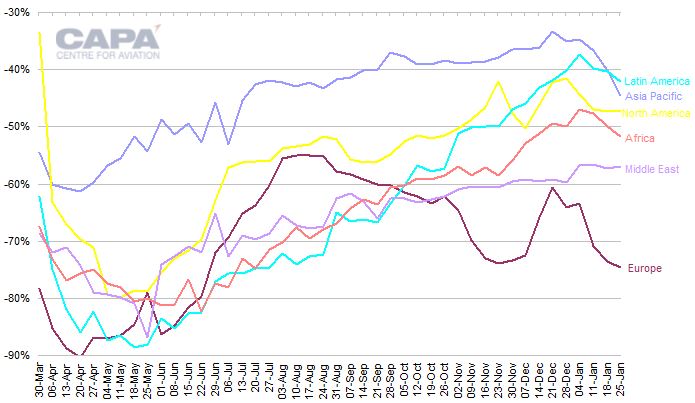 Just as Europe's seat capacity has resumed a downward trend since Dec-2020, so too has the number of aircraft in service.

According to the CAPA Fleet Database, the number of passenger jets in service with European airlines fell from 5,759 at the end of Jan-2020 to just 1,183 at the end of Apr-2020, a drop of 79% as the first lockdown gripped the continent.

At the same time, the number of inactive passenger jets (parked or stored) rose from 563 to 5,125.

Numbers in service declined until the end of Nov-2020, as restrictions tightened once more, before rising briefly in Dec-2020 as vaccine hopes grew and the UK partially eased its quarantine rules.

Rising COVID-19 case numbers, new strains of the virus, and newly introduced lockdowns have prompted another decline in the number of passenger jets in service with European airlines, from 3,706 at the end of Dec-2020 to 3,520 at 26-Jan-2021.

As a percentage of the total number of passenger jets, the number in service in Europe has underperformed against the world average throughout most of the crisis, with the exception of the peak summer 2020 period.

Moreover, Europe's figure has fallen from its end Aug-2020 peak of 65%, whereas the world average has been broadly stable since then. 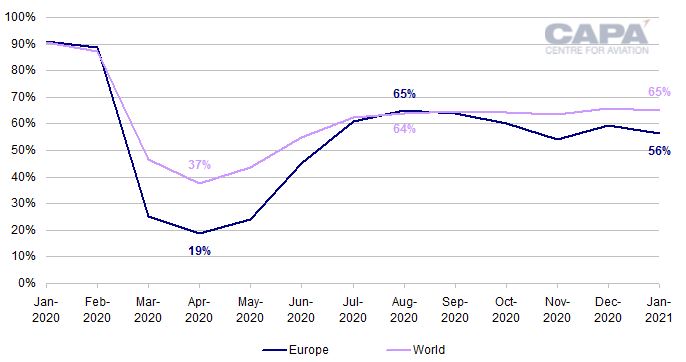 Europe's LCCs have had a higher percentage of jets in service than their legacy counterparts since emerging from the first lockdown in summer 2020, according to data from the CAPA Fleet Database.

The more rapid expansion and contraction of LCC fleets in service indicates their greater flexibility in entering and exiting markets as demand conditions change. 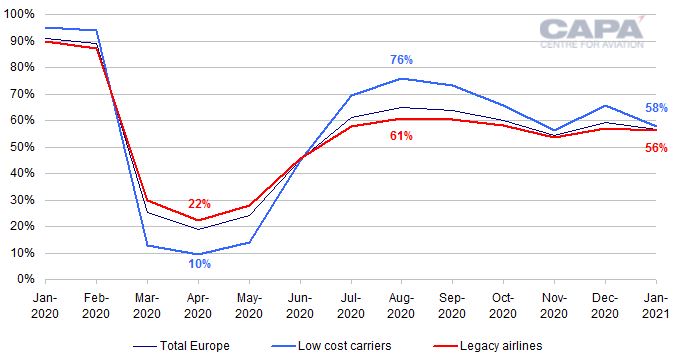 Expect further near term cuts in Europe; LCCs to lead when demand picks up

In the near term, the prospects for Europe's airline seat capacity and numbers of aircraft in service remain challenging.

National lockdowns in a number of countries, including in large Western European nations such as Germany and the UK, are set to extend well into Feb-2021, and possibly later.

In addition, the UK is planning to mandate quarantine in hotels for arrivals of UK nationals, at their expense, from countries deemed to be higher risk. This would be a much greater deterrent to international travel than the current system of self-isolation at home.

Airlines are planning further schedule cuts. According to schedules filed with OAG and seat data from CAPA, Jan-2021 seat numbers are now projected at 29.3% of 2019 levels, down from Dec-2020's 31.9%.

Expect further near term cuts to European airline capacity and active fleets. When demand does start to pick up, expect low cost airlines to lead the way.