Europe's flag carriers are in trouble - especially those with weak balance sheets. Rampant M&A activity is being fanned by the deteriorating traffic environment, with latest Association of European Airlines (AEA) data for Nov-08 painting an especially bleak picture.

Overall, November saw a "resounding drop in volume", according to the AEA, with a negative figure of this magnitude not seen since the Gulf War in early 2003. The industry body added such a fall was unprecedented for periods unaffected by external shocks. 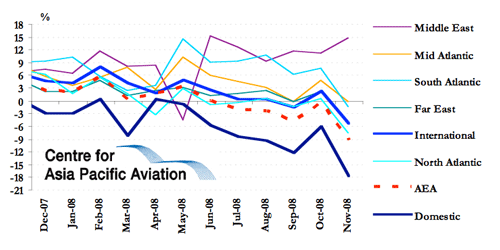 Besides the short-haul problems, the biggest loser in Nov-08 was the North Atlantic, with a 7.0% drop in AEA traffic volumes. This is a big premium travel market - and the impact of lower volumes in this route area would be felt most keenly by the AEA members.

Asia Pacific ('Far Eastern') traffic was down 3.0%, and even the "perennially buoyant" South Atlantic route showed a decrease, of 1.0%.

The traffic downturn occurred against a capacity decrease of 2.7%. With the inception of the Winter timetable season, 21 out of the 31 airlines who report passenger data had instituted capacity cuts, planned in advance as economic conditions deteriorated during the Summer. Overall, the capacity cuts did not achieve an improvement in load factors, which declined 1.5 points to 73.0%.

The weakness in the cargo market "took on a new dimension", according to the AEA, as the market slumped by 11.4% - a decrease which in AEA's records has been exceeded only once: in September 2001.

AEA Secretary General, Ulrich Schulte-Strathaus, stated, "the bad news does not stop here, with indications the market deterioration has intensified into the first half of December". He added, clearly, we are heading for a small growth for 2008 as a whole, of barely 1%, but that does not tell the story of how tough the business conditions are this Winter".