Aer Lingus, which is undertaking a major cost restructuring programme, dropped 4.6% on Friday, as Irish Transport Minister, Noel Dempsey, urged the carrier to go ahead with cost cutting plans, despite potential strikes over job losses.

Mr Dempsey told Reuters on 18-Oct-2009, that Aer Lingus “is faced with a very fundamental question - survival or a continuation for perhaps maybe two years". He added, "there is little doubt in my mind having seen how the cash has been burned up in Aer Lingus over the last 12 months that unless they get the savings of up to EUR100 million, we will not be talking about an Aer Lingus in a few years time". The Irish government holds a 25% stake in Aer Lingus. 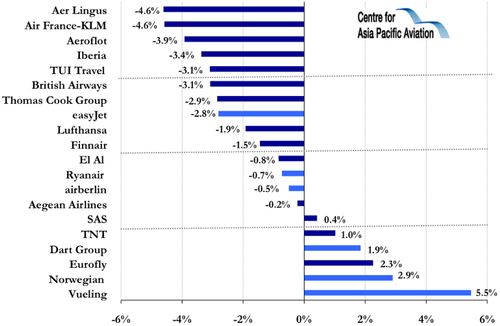