European airline shares were mixed on Friday (30-Jul-2010) as British Airways announced it was confident of breaking even, but wider markets fell on disappointment over a slowdown in the US economic recovery.

Aegean Airlines (+5.8%) was the day’s biggest gainer, despite the European Commission opening an investigation under the EU Merger Regulation into the planned merger between the carrier and Olympic Air. The initial market investigation indicated the proposed merger could raise serious competition concerns, in particular because the merged entity would have very high, if not monopolistic, market shares on all domestic routes and on a number of international routes where both parties operate. The EC also has serious doubts as to the compatibility of the transaction with the Merger Regulation in connection with the provision of public service obligation routes in Greece and the provision of ground handling services there. The EC has until 07-Dec-2010 to take a final decision on whether the merger would significantly impede effective competition in the European Economic Area or any substantial part of it.

British Airways confident of breaking even this year

British Airways (+1.7%) also rose, after reporting better-than-expected financial results for 1Q2010 during trading. The carrier reported a pre-tax loss of GBP164 million, compared with a loss of GBP148 million in the previous corresponding period.

However, yields improved by 13.5%, or 12.7% excluding exchange, driven by a change in mix. Without the disruption during the period, passenger revenue would have increased by 11% year-on-year.

CEO, Willie Walsh, stated it is confident it can break even at a pre-tax level this year, due to a continuing “steady recovery” in the economy.

Merrill Lynch had expected the airline to report a loss of GBP200 million. As a result, analysts raised their FY2011 and 2012 EBIT forecasts to GBP350 million and GBP550 million, respectively. The company also reiterated its "buy" rating of BA, with a GBP 295 pence price target.

Aer Lingus (-1.1%) fell after announcing trade union, Impact, has decided to ballot for a third time over the airline's greenfield cost-cutting programme. The dispute arose after Aer Lingus management proposed changing staff working hours – part of the airline’s move to reduce costs by EUR97 million. Impact has accused the airline of breaching agreements, acting unilaterally and seeking excessive changes for staff. If members vote in favour of action, they could mount a strike or begin work-to-rule action in Aug-2010. 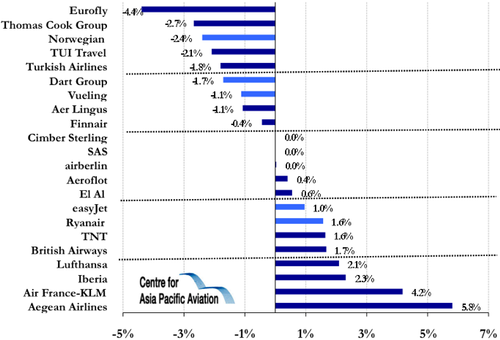