Shares in British Airways climbed 3.5% yesterday, while Aer Lingus jumped 3.0%. The Irish carrier announced plans to launch a new cost cutting plan in the northern Autumn 2009 to conserve cash and become more efficient amid the global economic downturn. Cost cutting measures are to be implemented across both staff and non-staff areas.

Earlier this month, Aer Lingus announced it was seeking a further EUR130 million in cost cuts, focusing on its trans-Atlantic and ground operations. The carrier also reached an agreement with Airbus in early Aug-2009 allowing it to stabilise its long-haul fleet at eight aircraft up to 2013 and significantly reduce its capital requirements over the next three years.

Shares in Air France-KLM were up 2.1% yesterday, while Lufthansa gained 1.2%, as the carrier’s proposed acquisition of Austrian Airlines reaches the final stages of EU approval. A merger agreement could be signed within ten days of gaining EU approval, with the carrier reportedly expecting to close the deal on or around 03-Sep-09. Austrian Airlines’ shares gained 0.5% yesterday. 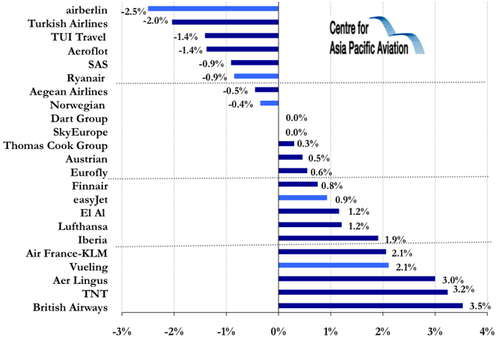