Ballot papers have been issued to over 12,000 BA staff. The papers are being issued on the same day that BA commences to impose changes to in-flight crew complements and working practices, changes which Unite believes are not only unworkable but are also contractual and so must be negotiated, not imposed. The ballot is scheduled to close on 14-Dec-2009.

Between 750 and 800 pilots are protesting plans by the company to use its pilots to train aircrew to operate Finnair aircraft leased to other carriers, while retrenching some of its own pilots. The strike is expected to cost the carrier EUR2.5 million to EUR5 million per day.

Meanwhile, Finnair CEO, Jukka Hienonen, was quoted in Finnish newspaper, Kauppalehti, stating the carrier expects to report a EUR200 million loss for 2009. Shares in Finnair were up 0.8% yesterday.

Elsewhere, Aeroflot led the way upward, gaining 5.2% yesterday, while Austrian Airlines dropped 10.0%. Investors digested Lufthansa’s plan to vote on an offer to “squeeze out” the remaining shareholders of Austrian Airlines for EUR0.50/per share in extraordinary shareholder meeting on 16-Dec-2009. Shares in Lufthansa gained 1.1%. 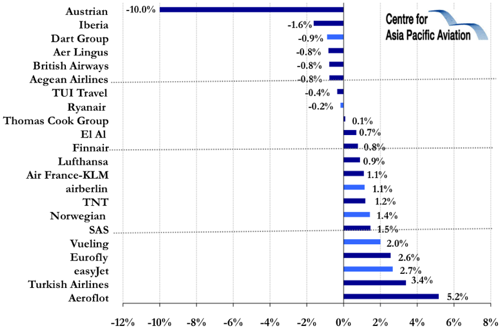