Europe's capacity recovery has regained momentum in the first week of the winter season.

The most recent ACI Europe preliminary airport passenger data indicate that traffic was 35% below 2019 levels in the week of 17-Oct-2021, when capacity was down 33%. This was before this week's upward step in the capacity trend, and followed several weeks when passenger traffic was approximately 39% below 2019.

The 2ppt gap is the narrowest since pre-pandemic and a positive indicator for airline load factors (but likely at the expense of yield).

In the week commencing 25-Oct-2021 total European seat capacity is scheduled to be 22.5 million, according to OAG schedules and CAPA seat configurations.

This week's total seat capacity for Europe is split between 6.5 million domestic seats, versus 7.3 million in the equivalent week of 2019; and 15.9 million international seats, versus 22.5 million.

International seat capacity is down by 29.2% versus 2019. This compares with last week's -38.8% and is the highest percentage of 2019 levels that international capacity has reached since before the crisis.

Europe has jumped from fourth to third place in the ranking of regions measured by seats as a percentage of 2019 levels.

Asia Pacific remains at the bottom as the worst-performing region, with capacity down by 39.4% versus 2019 this week. Next worst is the Middle East, where seat count is down by 36.9%

Europe, North America and Africa have taken upward steps in the trend this week, whereas Asia Pacific and Latin America have taken downward steps. Middle East is broadly flat on last week. 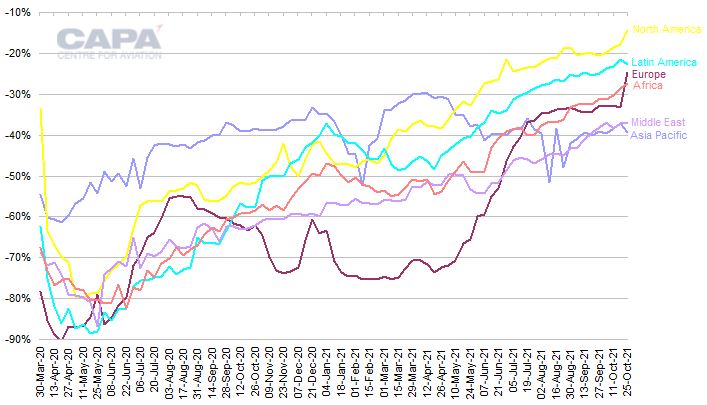 By contrast, during the first four weeks of 3Q2021 capacity projections for that quarter slipped from 72% to 69% (and the final outcome was 64%).

Passenger traffic has narrowed the gap to the capacity trend

Europe's passenger numbers have been at lower percentages of 2019 levels than capacity has throughout the pandemic, but the gap has narrowed considerably.

According to preliminary data from ACI Europe covering 86% of European passenger traffic, passenger numbers were down by 35% versus 2019 in the week commencing 17-Oct-2021. This is the most recent week for which the passenger data are available, so just before the start of the winter season.

This was 1ppt better than in the previous week and only 2ppts below the seat trend in the week of 17-Oct-2021.

This is the closest that the passenger trend has been to the capacity trend in any week since before the coronavirus pandemic.

The average gap between the two curves was 7ppts in 1Q2021, widening to 9ppts in 2Q2021. However, the average gap narrowed to 6ppts in 3Q2021 and only 4ppts in the most recent four weeks. 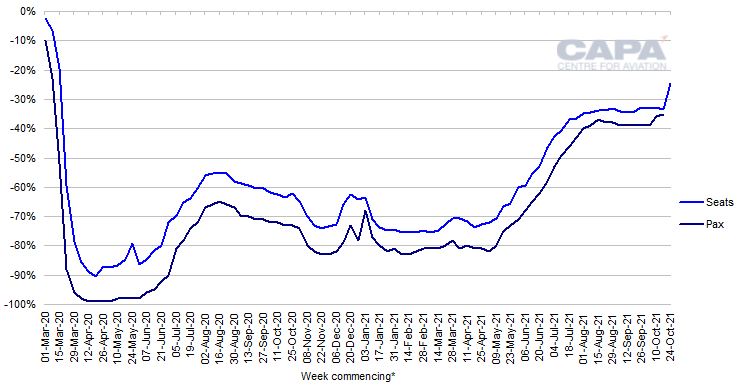 The broad split between northern and southern Europe in the rate of recovery of passenger traffic remains, with traffic in the south of the continent recovering to higher percentages of 2019 levels.

Almost all major nations and regions took upward steps in the passenger trend in the week of 17-Oct-2021 compared with four weeks earlier (week of 19-Sep-2021).

In Eastern EU member states traffic was 45% below 2019, compared with -46% four weeks earlier.

Italy passenger traffic was down by 37% versus 2019's – the best rate among Western Europe's large nations and slightly up from -38% four weeks earlier.

The Southern Europe region was enjoying a stronger traffic recovery, with passenger numbers 28% below 2019 levels in the week of 17-Oct-2021. This compared with -32% two weeks earlier.

…and is still strongest in non-EU Eastern Europe

Again, the recovery in airport passenger numbers as a percentage of pre-pandemic levels is strongest outside the EU/EEA/Switzerland/UK, i.e. in the nations of Eastern Europe, where those numbers were only 23% below 2019's in the week of 17-Oct-2021. 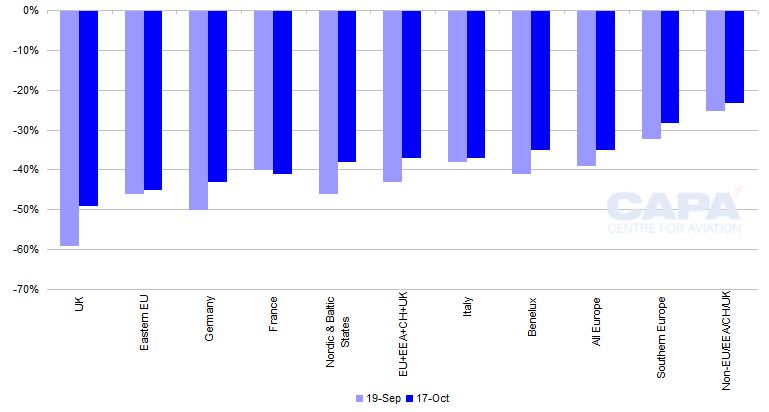 European aviation's recovery is at the highest point so far

Europe's airlines are now displaying more confidence in their schedules than at any time since before the pandemic.

In the first week of the winter schedule seat numbers are now 75% of their level in the equivalent week of 2019 – the highest percentage so far in the recovery.

Moreover, the firmness of the 4Q2021 schedule contrasts with the almost continuous slides at the equivalent stage of previous quarters during the pandemic.

The upward step last week (week of 18-Oct-2021) in passenger numbers to 65% as a percentage of 2019 levels when capacity was at 67%, even before the start of the winter schedule, is also cheering for European aviation as the weather starts to chill.

This may reflect price stimulation in the market – LCCs continue to lead the recovery – but it is important to encourage passengers back in the air.