Europe's capacity recovery has stalled in the week commencing 6-Sep-2021.

Total seat numbers are 34.1% below 2019 levels, which is 0.9ppts worse than last week (week commencing 30-Aug-2021). The slide is not vast, but it is a change of direction after four months of improving data and then five weeks on a plateau.

Moreover, Europe has slipped into fourth place in the regional capacity recovery ranking. The Middle East, where seat capacity is down by 43.1% versus 2019, remains at the bottom. Asia Pacific is down by 40.8%, Africa by 32.6%, Latin America by 25.6%, and North America by 20.5% this week.

The small slide in Europe's capacity trend as a percentage of 2019 is only one week's data. However, it reflects both a slide in the trend of intra-Europe capacity, which has led the recovery in recent months, and in the trend of LCC capacity versus 2019 levels.

Europe's low cost airlines have consistently been more responsive to market fluctuations during the coronavirus pandemic, growing more in upturns and cutting more in downturns. LCC capacity movements are worth noting.

In the week commencing 6-Sep-2021, total European seat capacity is scheduled to be 24.1 million, according to OAG schedules and CAPA seat configurations.

After six weeks when Europe was in third place in the ranking of regions measured by seats as a percentage of 2019 levels, it has slipped down to fourth place, just behind Africa.

The Middle East is the worst performing region, with capacity down by 43.1% versus 2019 this week.

Asia Pacific and Africa have taken upward steps in the trend this week, whereas North America and Europe have moved downwards and Latin America and the Middle East are broadly flat on last week. 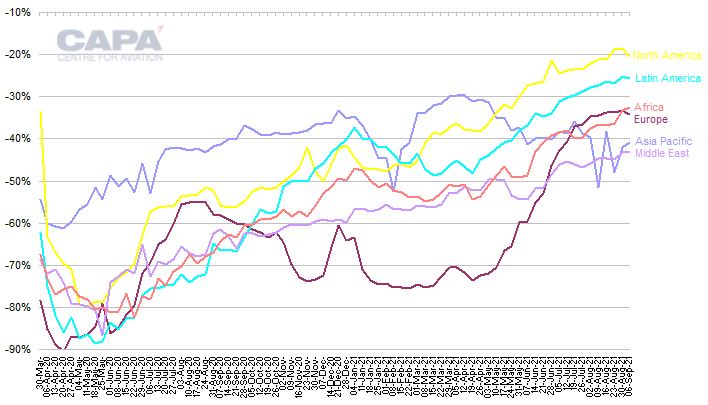 The capacity recovery in Europe has been led by intra-Europe capacity.

As with total capacity, intra-Europe capacity as a percentage of 2019 has slipped off its recent peak (down 1.4ppts from last week).

Nevertheless, is has consistently outperformed total Europe capacity, particularly when the capacity recovery has been most positive. 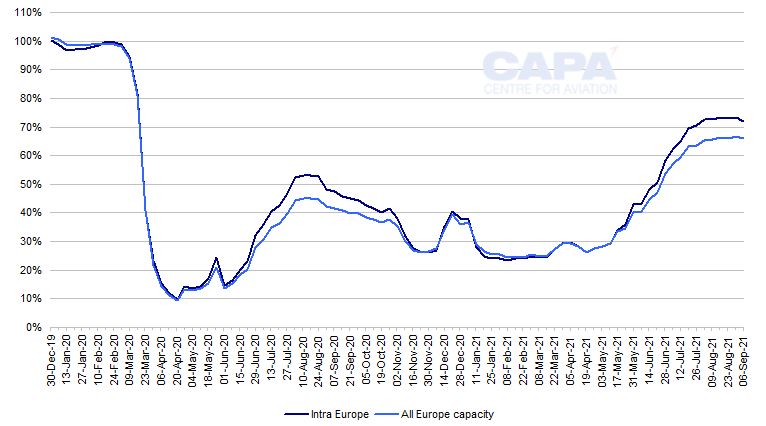 LCCs have grown more in upturns and cut more in downturns

LCCs are leading the intra-Europe recovery, but they have underperformed when the recovery has slowed or stalled.

However, because LCCs cut capacity much more rapidly than other operators during 1Q2021, their annual share of intra-Europe  capacity is projected to fall to 40.3% in 2021 (based on current schedules from OAG and seat configurations from CAPA).

In the current summer period Europe's LCCs –  particularly the ultra LCCs (see below) –  are taking greater advantage of the partial recovery. Their seat share is projected to be 43.8% in 3Q2021, compared with 41.6% in 3Q2019. 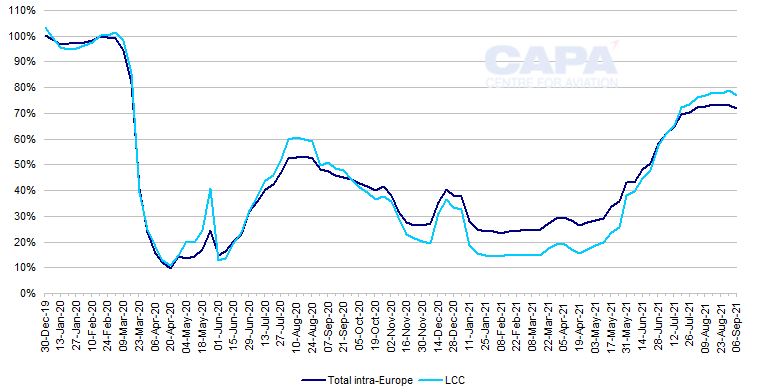 The Turkish ultra LCC Pegasus Airlines, one fifth the size of Ryanair by seats, is at 94% and projected to exceed 100% in Nov-2021.

Ryanair – Europe's leading LCC, and leading airline group of any business model by seat capacity – is currently at 91.7% of its 2019 seats. Current schedules project that the ultra LCC will be back over 100% of 2019 levels at the start of the winter season in late Oct-2021.

Not all of Europe's LCCs have returned capacity as quickly as Ryanair, Pegasus and Wizz Air.

Among the low cost subsidiaries of the leading European legacy groups, Air France-KLM's Transavia is recovering most rapidly, while Lufthansa's Eurowings is the slowest.

LCC capacity movements are worth noting

LCCs have been more nimble both entering and exiting markets during the pandemic, building on their much more flexible culture developed over many years before the COVID-19 crisis. Their response to changing market conditions should not be ignored.

According to data from CAPA/OAG, all of the leading LCCs have a lower percentage of 2019 seat numbers this week compared with last week (apart from Ryanair, which is flat).

The small decline in total European capacity as a percentage of 2019 seats may prove to be just a blip in what is a fairly volatile data series.

Nevertheless, the accompanying slide in LCCs' intra-Europe seats as a percentage of 2019 levels is a cause for at least some concern.