Europe's capacity recovery has reached a new pandemic-era high, in terms of the percentage change in weekly seat numbers from the equivalent week of 2019.

Europe's seat capacity shortfall of -15.6% versus 2019 levels in the week commencing 2-May-2022 is its best week on this measure since before the COVID-19 crisis.

Europe's seat capacity recovery since late Jan-2022 has mainly been driven by recovering international capacity. International capacity's share of total Europe seats is not yet back to pre-COVID levels, but will remain a key indicator of the overall recovery.

In the week commencing 2-May-2022, total European seat capacity is scheduled to be 27.7 million, according to OAG schedules and CAPA seat configurations.

Expressed as a percentage change from the equivalent week of 2019, both the international and domestic market have improved from last week, although neither has matched its pandemic-era high.

All regions have reached new pandemic-era highs on this measure, with the exception of Asia Pacific.

Africa, the Middle East, Latin America, Europe and North America have taken upward steps in the trend this week, whereas Asia Pacific has taken a downward step.

Strong performances this week by Africa and the Middle East have taken them to second and third place respectively, pushing North America back into fourth after more than a year in the top two.

Latin America is now closer to 2019 capacity levels than any region has been since before the pandemic. 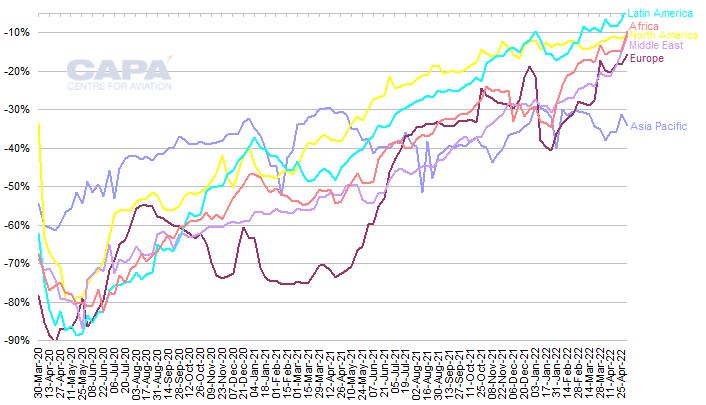 European aviation's capacity recovery since late Jan-2022 has been driven mainly by a recovery in international seat capacity. Indeed, international capacity has been the key to the ebb and flow of European seat numbers throughout the coronavirus pandemic.

According to data from CAPA and OAG, Europe was comfortably the biggest world region ranked by international seat capacity in 2019. With almost 1.3 billion international seats, Europe's international market was 61% bigger than Asia Pacific's and 2.6 times North America's.

Moreover, Europe is more reliant on international markets than the other leading aviation regions.

In 2019 international markets accounted for more than three quarters (76%) of Europe's 2019 seat count, compared with just over a third (34%) for Asia Pacific and only a quarter (25%) for North America.

International seat capacity accounted for 72% of Europe's total in the last week of Dec-2021, at that time the highest share of total capacity since early in the pandemic. At the same time, total seats as a percentage of the equivalent week of 2019 also reached a new high in late Dec-2021.

However, the Omicron wave of the pandemic led to international capacity falling to only 68% of the total in the week of 24-Jan-2022, when total capacity slumped to only 60% of 2019 levels. 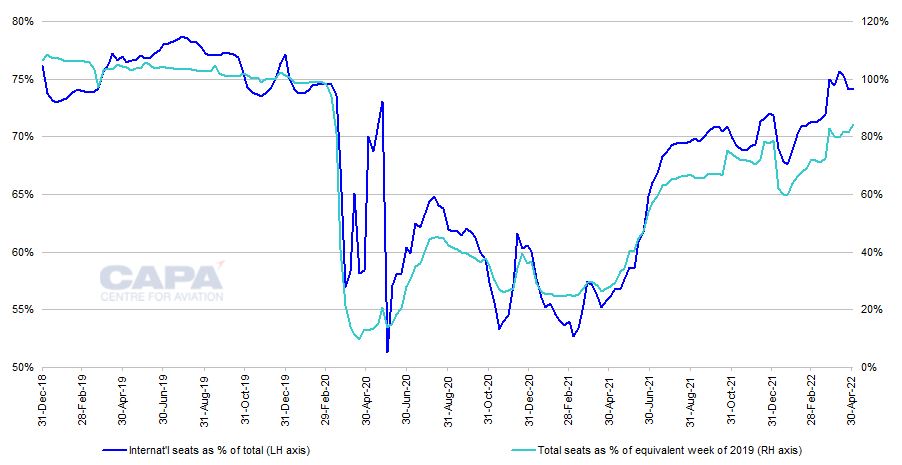 International capacity's share of the total has actually slipped slightly from 76% in mid-Apr-2022, since domestic capacity has outpaced it in recent weeks. Moreover, the current 74% share is below its 76% in the equivalent week of 2019.

As and when international capacity returns to its pre-COVID share, this will further boost the overall capacity recovery.