Europe’s full service airlines have seen an improvement in traffic volumes in April, thanks largely to Easter falling in April this year. In the week ended 19-Apr-09 (Week 16), total traffic (RPKs) for the members of the Association of European Airlines (AEA) was down 1.1% year-on-year after falling 6.7% the previous week (Week 15). Week 14 traffic was boosted by Easter. 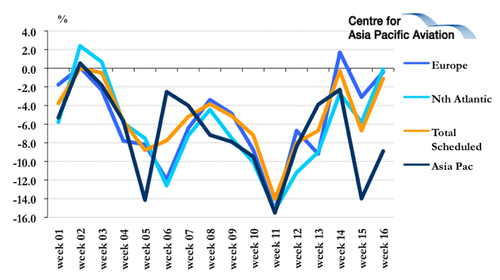 The big news in the past week is that AEA members have finally brought capacity (ASK) levels below demand (RPKs) in all regions, except the Asia Pacific. Total member capacity dipped 3.5% in the week ended 19-Apr-09, including a 4.7% reduction in cross-border European capacity and a 5.4% reduction on the North Atlantic. Asia Pacific remains problematic, with a 3.7% capacity reduction still falling short of the 8.9% reduction in demand. 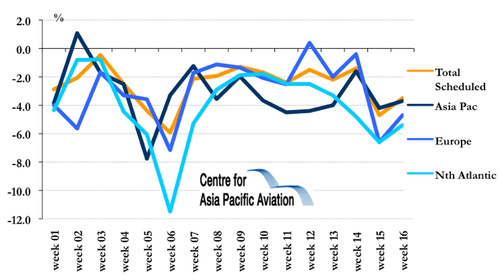 As a consequence, load factors are continuing to rise to a point where airlines may soon start to gain some traction on pricing, particularly on the North Atlantic, where load factors have risen back above 85%. 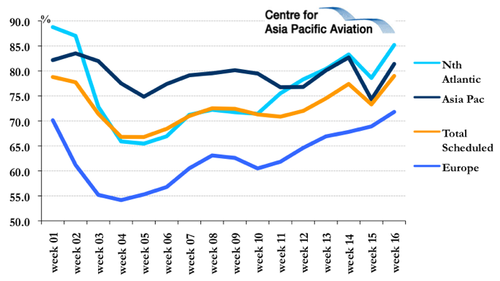 Outlook: April to be the best month so far this year, but a long way to go

Europe’s full service carriers are finally getting the demand-supply balance right on most regions and should see a mild negative reduction in traffic in Apr-2009. Thanks to the later Easter, AEA members should report their best month this year.

Other non-AEA members are also confident of a better April. Ryanair said last week that April traffic will be “very strong,” and that it expects a “double- digit” increase this month because of the Easter holidays.

But market competition remains intense in all regions as the recession drags on. British Airways CEO, Willie Walsh, told German newspaper, WirtschaftsWoche, at the weekend, “I don't see a sign of improvement in the economic environment. It will get worse before it gets better”.