This second wave of the virus, plus frequently changing travel restrictions and quarantine requirements, is weighing more heavily on airline schedules with each passing week.

Europe's route numbers have been cut by only 38.2%, so airlines are preserving networks at the expense of the frequencies that are so important for business travel.

With the last full week of Sep-2020 now under way, European capacity derived from schedules filed with OAG for the month is projected at 42% of 2019 levels, down from 45% in Aug-2020. Oct-2020 capacity is currently projected back up to 47%, but with no sign of positive momentum in the short term, this must surely be revised downwards.

Total European seat capacity is scheduled to be 14.2 million in the week of 21-Sep-2020, according to schedules from OAG combined with CAPA Fleet Database seat configurations.

This week's total is split between 5.5 million domestic seats, versus 8.2 million last year; and 8.7 million international seats, versus 27.4 million.

Europe's domestic seats have been cut by 32.9% year-on-year, compared with last week's -32.0%. This was the fifth successive downward step, but still the 13th week running with domestic capacity at more than 50% of last year.

The 60.1% year-on-year cut in total seats this week is the 27th week of very heavy double digit percentage (more than 50%) declines in seats.

It is 0.9ppts wide than last week's 60.1% drop, extending the run of deepening year-on-year percentage cuts to five weeks after 11 previous weeks of narrowing.

Europe again has the third narrowest year-on-year cut in seat numbers this week.

Latin America continues to have the deepest cut, with a reduction of 66.8% year-on-year, below the Middle East, where seats are down by 66.1%.

Asia Pacific has now had 11 consecutive weeks at more than 50% of last year's capacity. 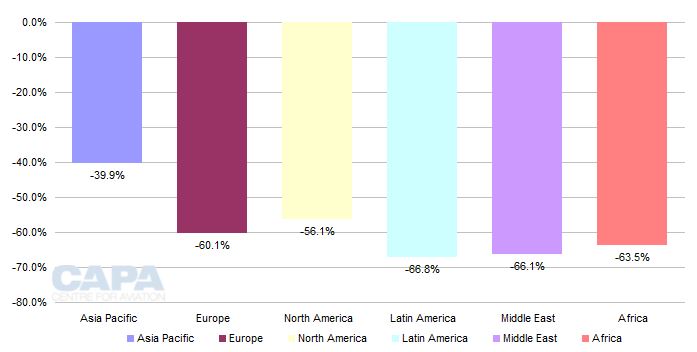 Whereas Europe's trend in year-on-year cuts was approaching that of North America in early Aug-2020, a run of deepening cuts in Europe has led to the gap widening.

Europe's five-week slide is a longer run of deteriorating year-on-year capacity changes than in any other region.

Asia Pacific is the only region to be following a consistently narrowing trend of year-on-year cuts in recent weeks, albeit only modestly. It is now just above 60% of 2019 capacity. 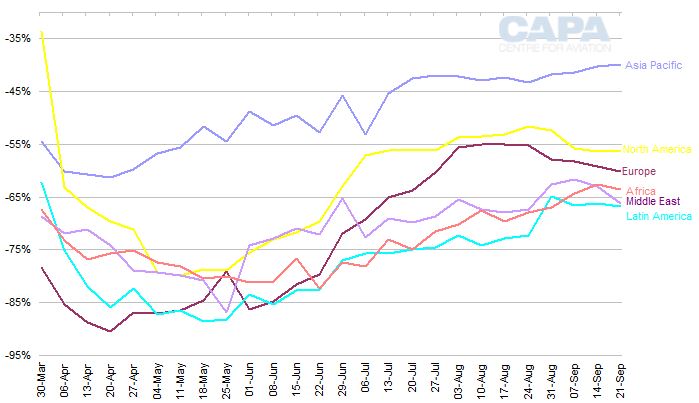 Further cuts have been made to September and October schedules…

With the last full week of Sep-2020 now under way, projected seat numbers for the month are 2% lower than expected last week and are now anticipated to be down by 59% year-on-year (compared with -58% projected last week).

For 3Q2020 as a whole – normally the peak quarter of the year – European seat numbers derived from schedules filed with OAG are projected to be 61% below the same quarter of 2019, i.e. at 39% of last year's level.

Projected Oct-2020 seat numbers are 8% lower than expected last week are now anticipated to be down by 53% year-on-year (compared with -49% projected last week).

Moreover, Ryanair – Europe's largest airline group by 2019 passenger numbers and one of the more aggressive operators in terms of returning capacity to the market – now plans Oct-2020 at only 40% of last year's levels (i.e. a reduction by 60% year-on-year).

In spite of the EU's approval to extend the waiver of the 'use or lose it' airport slot rule on 14-Sep-2020, there are only small further cuts to the winter schedule this week.

This means that capacity for the final two months of the year is currently scheduled to be more than 80% of 2019's levels.

Capacity for the first two months of 2021 has been lowered by 1% since last week, but is still scheduled to be at around 86% of the seat numbers of Jan-2020 and Feb-2020 (which were the final two months before schedules worldwide were heavily affected by the coronavirus).

Significant cuts to this winter outlook are inevitable.

British Airways CEO Alex Cruz does not expect passengers to return in the short term but anticipates a slow recovery, according to a number of media reports (16-Sep-2020).

The group's capacity levels may rise a little ahead of passenger numbers – this has been the case across the industry in the recovery so far - but this illustrates how the capacity outlook into the coming winter remains significantly out of touch with reality. 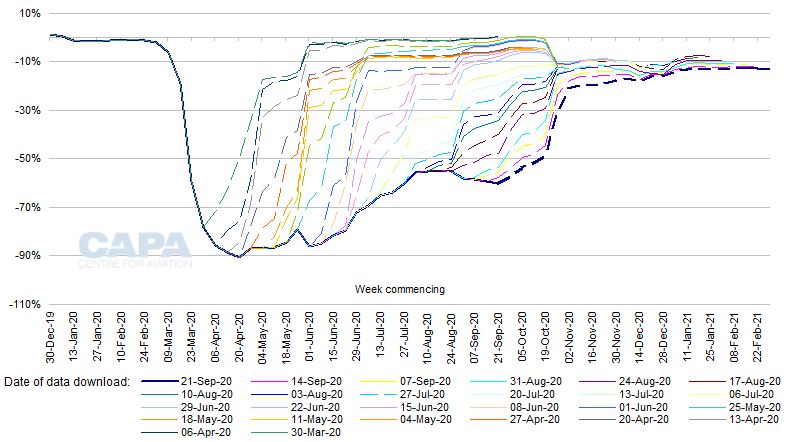 Europe's 60.1% reduction in seat numbers in the week commencing 21-Sep-2020 versus the same week in 2019 mainly reflects a cut in frequencies.

However, the number of flights is down by the lesser rate of 56.2%, according to OAG.

The difference is explained by a fall in the average number of seats per frequency, which is down by 8.9%: from 181 seats a year ago in 2019 to 165 seats. This reflects the greater focus on short haul flights relative to long haul, where greater travel restrictions remain.

Average number of frequencies per route is down by 29.2%

Although capacity has been cut very heavily, airlines are attempting to preserve their networks as much as possible. The total number of routes to/from/within Europe is down by 'only' 38.2% year-on-year (source: OAG) – much less than the 60.2% cut in seat numbers.

Reduced frequencies is another dampener for business travel

Maintaining route numbers at a higher rate than frequencies is good for maintaining network integrity and preserving connectivity.

However, it is a further dampener on demand for business travel at a time when the COVID-19 pandemic has already placed very significant downward pressure on this segment of air travel.

Corporate travel budgets have been heavily reduced. Government-imposed travel restrictions and quarantines are seriously limiting business travellers' ability to plan work-related trips. Companies are taking their duty of care towards their employees very seriously when asking them to travel during a pandemic. Improved virtual communications have replaced at least some of the need for business travel.

Even in circumstances when all of these challenges have been addressed or overcome, a reduced flight schedule is an additional deterrent to the business traveller, who typically demands the flexibility to take a different flight from the one originally booked and likes to have a range of options.

The outlook is highly uncertain

It can be argued that business travel demand is heavily reduced anyway, so the loss of frequencies will not make much more difference.

Either way, the greater collapse in business travel versus total air traffic compounds the revenue hit to airlines whose profitability depends significantly on high yield passengers.

This situation is more pressing for the legacy airlines, but even ultra LCCs such as Ryanair carry passengers travelling for business purposes.

In the internal memo recently reported in the media, Lufthansa's Mr Spohr also said the company is only aiming to reach to 2019 revenue levels by 2025, however a "drastic decline in business travel" means the target "remains highly uncertain".

The outlook is highly uncertain for all of Europe's airlines.