European airline capacity: first time back over 50% of 2019

Further recovery will also depend on international capacity much more than on domestic.

With progress towards relaxing international travel restrictions still patchy, the average of 72% of 2019 capacity currently scheduled for 3Q2021 looks optimistic.

In the week commencing 28-Jun-2021, total European seat capacity is scheduled to be 19.7 million, according to OAG schedules and CAPA seat configurations.

This week's total seat capacity for Europe is split between 6.9 million domestic seats, versus 8.1 million in the equivalent week of 2019; and 12.8 million international seats, versus 28.7 million.

Europe is no longer the weakest region

Europe's 46.4% cut in seat numbers takes it above the Middle East, where seat capacity is down by 48.5% versus 2019 this week (week commencing 28-Jun-2021). This means that Europe is no longer the worst performing region on this measure, for the first time since Oct-2020.

Europe, North America, Africa and Middle East have taken upward steps in the trend of seats versus 2019 levels this week. Asia Pacific and Latin America have remained broadly level with last week.

All regions are above 50% of 2019 capacity for the first time during the pandemic. 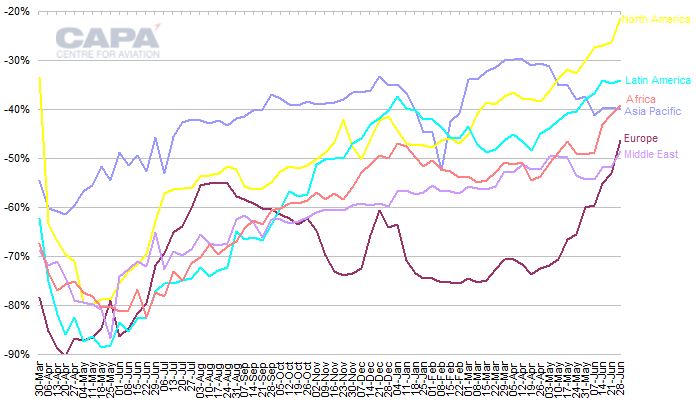 Schedules for 3Q2021, which starts during the current week, have been trimmed by 1% since last week. Seat numbers for the quarter are now planned to be down by 28% versus 2019.

This average of 72% for 3Q2021 is the highest level planned at the start of any quarter since the start of 2Q2020, when capacity was scheduled to be 73% of 2019. The out-turn for 2Q2020 was just 15%, when many airlines were almost completely grounded as the pandemic was then at its peak.

The outlook for 3Q2021 schedules has not changed much over the past month, falling only a little from 74% to 72% of 2019 capacity in that period.

So far, the data for 3Q2021 indicate that European airlines have hopes for greater resilience in capacity planned for the established peak quarter of the year.

Europe: projected seat capacity as a percentage of equivalent quarter of 2019, one month before quarter start and at quarter start, with final outcome 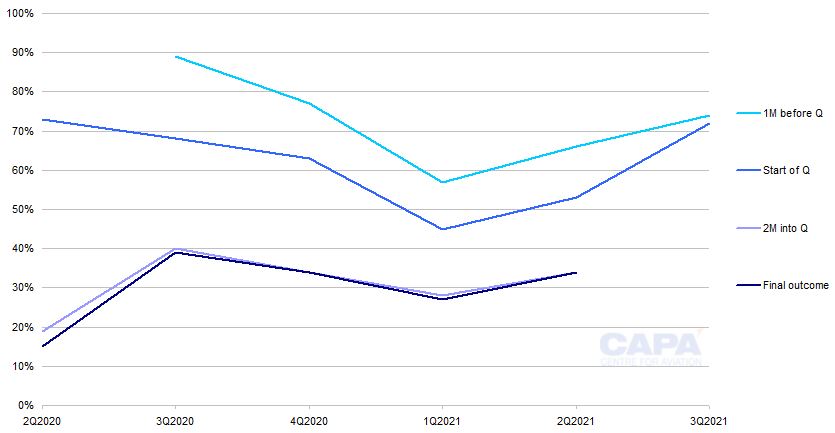 Europe's recent recovery has been led by international capacity

The resurgence in capacity in Europe since mid Apr-2021 has been led by a recovery in international seats, which were harder hit by the pandemic than domestic capacity. Over the past 10 weeks domestic European capacity has grown 1.8 times, whereas international capacity is up 2.7 times.

Based on schedules currently filed with OAG, the peak capacity week for Europe in 3Q2021 is projected to be the week of 06-Sep-2021 (also the peak for all of 2021), when a total of 28.4 million seats are scheduled.

This would be 78% of total capacity in the equivalent week of 2019.

This projected total is split between 7.9 million domestic seats and 20.5 million international seats, or 95% of domestic and 73% of 2019 international capacity in the equivalent week of 2019.

In order to reach the total projected for that peak week, 10 weeks into the future, only 1.0 million additional domestic seats are scheduled relative to the week of 28-Jun-2021. This is much fewer than the 3.1 million domestic seats added over the past 10 weeks.

*These values are at least partly predictive up to 6 months from 28-Jun-2021 and may be subject to change.
Source: CAPA - Centre for Aviation, OAG.

*These values are at least partly predictive up to 6 months from 28-Jun-2021 and may be subject to change.
Source: CAPA - Centre for Aviation, OAG.

As noted above, Europe's airlines have been doggedly holding on to their peak summer schedules, their hopes increased by vaccination rollout across the continent.

In turn, this depends on further relaxation of international travel restrictions. There has been some progress in this recently, but it remains piecemeal. The currently scheduled 72% of 2019 capacity for 3Q2021 continues to look optimistic.