European airline 4Q2021 schedules point to next step up in recovery

Airport passenger numbers in Europe were down by 39% versus 2019 in the week of 19-Sep-2021, the seventh week at a similar level, according to the most recent data from ACI Europe. This compared with capacity at -34% in that week. Europe's traffic recovery has a north-south divide, with Southern Europe stronger, while non-EU Eastern Europe is the strongest region.

Europe's capacity and passenger traffic as a percentage of 2019 levels both remain on plateaus. Nevertheless, there is some encouragement in capacity projections derived from schedules for 4Q2021. After many weeks of cuts to the outlook, capacity scheduled for 4Q2021 has stabilised at 73% of 2019 levels – up from 64% in 3Q2021.

In the week commencing 11-Oct-2021 total European seat capacity is scheduled to be 22.6 million, according to OAG schedules and CAPA seat configurations.

The trend has now been stuck in the range of -34.7% to -32.7% for 11 consecutive weeks. This is the most positive range since before the coronavirus pandemic, but Europe's capacity recovery has lost momentum after making strong gains in 2021 from April to July.

This week's total seat capacity for Europe is split between 6.6 million domestic seats, versus 7.7 million in the equivalent week of 2019; and 16.0 million international seats, versus 25.9 million.

Europe remains in fourth place in the ranking of regions measured by seats as a percentage of 2019 levels.

The Middle East has slipped to the bottom as the worst-performing region, with capacity down by 38.5% versus 2019 this week. It is only just below Asia Pacific, where seat count is down by 38.3%

Asia Pacific, North America, Africa and Latin America have taken an upward step in the trend this week, whereas the Middle East has taken a downward step. Europe is broadly flat on last week (week of 04-Oct-2021). 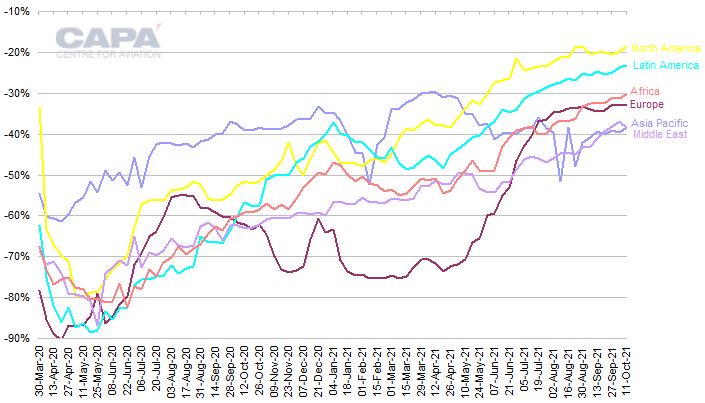 Schedules filed for 4Q2021 project a further upward step to 73% of 4Q2019 levels. This is virtually unchanged from the capacity planned for the final quarter of 2021 a week ago.

Although Europe's seat capacity has been stuck at a similar percentage of 2019 levels for more than two months, the apparent stabilisation in the outlook for 4Q2021 capacity is encouraging.

Just as Europe's capacity recovery has remained on a plateau, so has passenger traffic. Moreover, traffic continues to be at a lower percentage of 2019 levels.

According to preliminary data from ACI Europe covering 86% of European passenger traffic, passenger numbers were down by 39% versus 2019 in the week commencing 19-Sep-2021 (the most recent week for which data are available).

This was 1ppt worse than in the previous four weeks and the seventh successive week of passenger traffic being down a percentage point either side of -38%.

The passenger trend was 5ppts below the seat trend in the week of 19-Sep-2021.

This is the closest that the passenger trend has been to the capacity trend since the start of the pandemic. 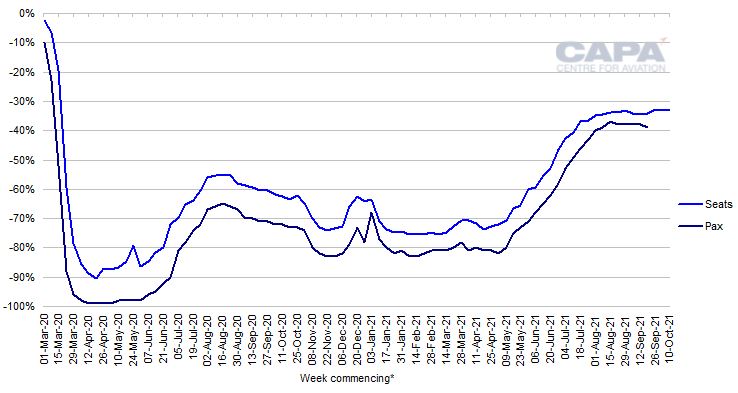 There are considerable differences in the rate of recovery of passenger traffic in different parts of Europe, according to the most recent data from ACI Europe. The broad split between northern and southern Europe remains, with traffic in the south of the continent recovering to higher percentages of 2019 levels.

Italy passenger traffic was down by 39% versus 2019: the best rate among Western Europe's large nations and in line with the average for all Europe, but down from -36% two weeks earlier.

The Southern Europe region was enjoying a stronger traffic recovery, with passenger numbers 32% below 2019 levels in the week of 19-Sep-2021. However, this had slipped from -30% two weeks earlier.

…and is still strongest in non-EU Eastern Europe

The recovery in airport passenger numbers as a percentage of pre-pandemic levels continued to be the strongest outside the EU/EEA/Switzerland/UK, i.e. in the nations of Eastern Europe, where they were only 23% below 2019 levels in the week of 19-Sep-2021. 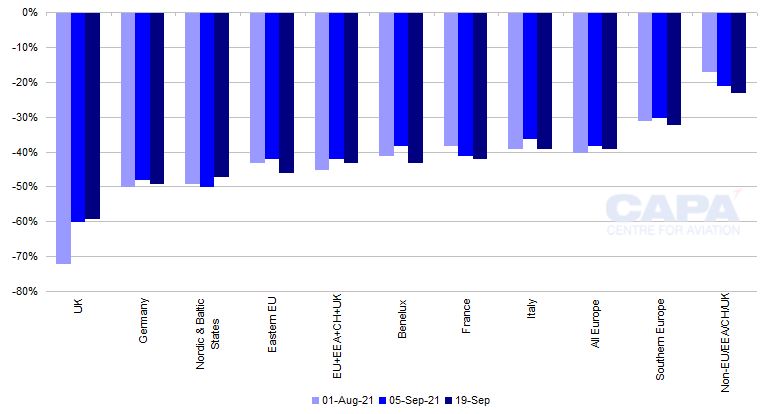 The recovery in European aviation, measured both by seat capacity and passenger traffic as a percentage of 2019 levels, has been range-bound for more than two months in 2021.

However, two factors in this week's analysis give signs of encouragement that the next upward step in the recovery will take place in 4Q2021.

The first of these is the narrowing of the gap between the traffic and capacity curves in Aug-2021 and Sep-2021 compared with earlier months.

The second is the stabilisation of capacity scheduled for 4Q2021, in contrast to previous patterns of regular cuts to capacity projections as flight schedules have drawn nearer.