European aircraft movements to remain around 2006 levels this year

2009 was a dramatic and traumatic year for EUROCONTROL, the European Organisation for the Safety of Air Navigation. Not only did traffic decline by 6.6%, but the economic situation had a dramatic and lasting impact on its airline and aviation customers, as Europe faced up to its “most challenging year… in living memory”.

Despite the difficulties, EUROCONTROL can also look at 2009 as one of progress. The organisation saw the formal launch of the SESAR development programme in Dec-2008, and the adoption of the second legislative package of the Single European Sky in Mar-2009, along with the endorsement by the European Commission of the European ATM Master Plan.

According to the President of the EUROCONTROL Provisional Council, there is no turning back from SES now, and the “radical changes” taking place in the aviation industry as a result of the increasing pace of SES activity have required a substantial restructuring of EUROCONTROL. With the acceleration of SES, the organisation has been give a new sense of purpose, something that has only been reinforced by the economic crisis, which has impressed the need for efficiency and leanness. 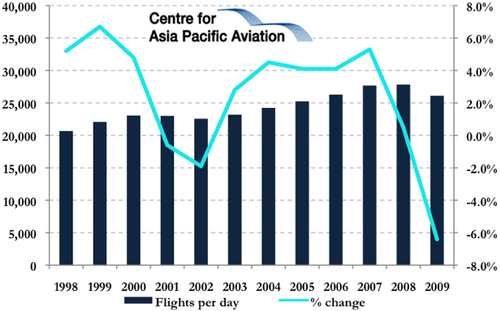 Through the year, the heaviest declines occurred in the first half, with a slow recovery through the remainder of the year. The contraction in 2H2009 (-4.8%) came on top of the fall in traffic levels during 2H2008, compounding the falls from the previous year. European flight levels dropped back blow 10 million flights p/a for the first time since 2006.

Overall trends in air traffic levels varied significantly across Europe. Increases were experienced in south-eastern Europe, especially in some of the Balkan States and Turkey, where growth averaged approximately 3-4%. There were notable declines in western Europe, with downturns of 5-10%. Drops were even more notable in countries with strong leisure tourism industries, such as Spain and the UK. The Baltic stated also suffered sharp downturns in traffic. 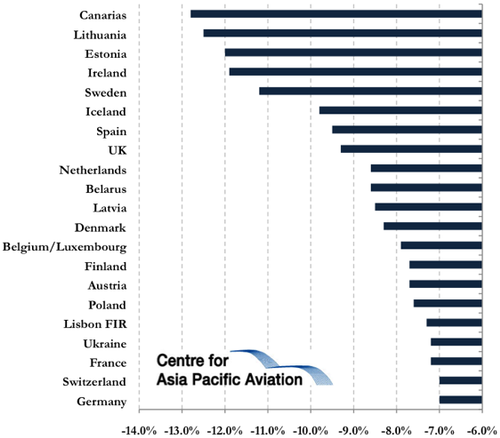 At the same time as traffic declines, he effective capacity of the European ATM network (corresponding to the volume of traffic that could be accommodated with an average en-route delay of 1 minute per flight) increased by 0.4% over the year, and was up 0.6% during the peak summer period.

EURCONTROL stated that the lower demand in 2009 should of enabled the complete closure of the gap between capacity and traffic in Europe. However, controller staffing issues, a problem globally, mean that the organisation was not able to optimise some ATM sectors, particularly in southern and eastern Europe.

Delays fall with lower traffic, but not at target yet

Average air traffic flow management delays in fell from 1.9 to 1.2 minutes. While the 38% decline in ATFM delays was welcome, EUROCONTROL was not able to achieve its target of en route delay target of 1 minute per flight. Airport delays dropped 15%. Overall delays per flight in Europe only decreased by 5.1%, mostly related to poor weather over the year. 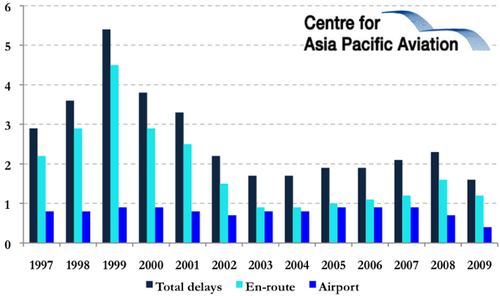 The second package of the Single European Sky (SES) regulation was adopted in Oct-2009 and came into force on 04-Dec-2009. Along with the launch of the SESAR technical programme at the end of 2008, these represent a major acceleration of the implementation of SES.

EUROCONTROL has undergone a significant structural realignment to deal with the needs and impacts of the SES legislation and SESAR programme. It is moving to establish three supporting directorates relating to Single Sky, Network Management and SESAR & Research.

One of the its key features of the new legislation is the “SES II Performance Scheme” setting binding national/FAB performance targets and incentives. European FABs will now have to be in-place by 2012.

European FAB initiatives as of Feb-2010 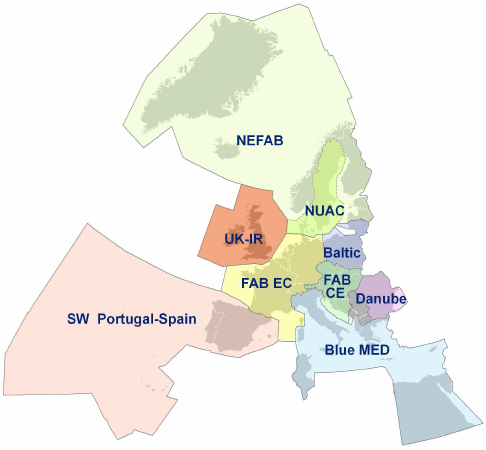 Aircraft movements are forecast to increase by just 0.8% in 2010, meaning traffic will remain around 2006 levels. The forecast has been significantly downgraded from the 1.7% increase anticipated in Dec-2009. This is mostly as a result of the ash event in Apr-2010, which forced the cancellation of more than 10,000 flights in Apr-2010, and intermittent cancellations in May-2010. Strikes and poor weather have also affected traffic levels in the first five months of the year.