The Single European Sky is a mess. After more than a decade of attempting to sort out the chaos of Europe’s legacy air traffic management system, the programme has yet to make good on its promises. Two packages of regulations have been put in place and a third is now on the way, but for European airlines that are suffering under the existing inefficient system, the lack of progress is both frustrating and economically damaging.

In 2010, European member states made firm commitments to merge their national air control spaces into nine Functional Airspace Blocks (FAB) by 04-Dec-2012 and to evolve progressively towards a single European sky. However, only two such blocks are ready: the block put together by the Danish and Swedish air navigation service providers and the UK-Ireland FAB. They also made commitments to a performance scheme for national air navigation service providers, most of which have yet to hit even watered down targets. 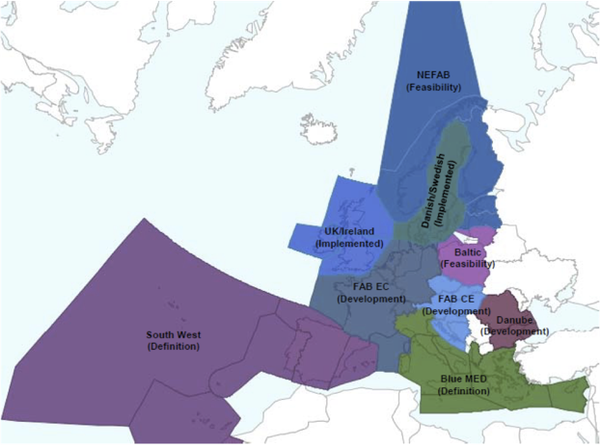 The Single European Sky (SES) aims to triple European capacity and half the unit costs of delivering air traffic management, yet European member states and air navigation service providers have achieved little demonstrable improvement. According to the European Commission, European air traffic control costs should have been reduced by 25% by now, yet costs are still above EUR715 per flight.

The Commission estimates the “full and swift deployment” of Single European Sky Air Traffic Management Research (SESAR) technology would lead to the creation of 328,000 jobs in Europe and cut CO2 emissions by some 50 million tonnes. Given the economic turmoil that Europe is suffering, this is a powerful economic argument. Passengers and airlines would benefit from cost reductions as congestion would be relieved, flight times would be cut by some 10% on average and cancellations and delays would be halved.

Europe’s airspace users, predominately its commercial airlines, are the ones who have to bear the cost. Europe’s air traffic management systems remain fragmented and inefficient, forcing airlines to fly longer routes, deal with flight delays and burn extra fuel and emit more CO2. None of these things are helpful to a European airline industry that is forecast by IATA to lose around USD1.2 billion in 2012, with more losses forecast for 2013.

Another EUR5.5 billion in indirect user costs are added due to the inefficiency of European air traffic management. 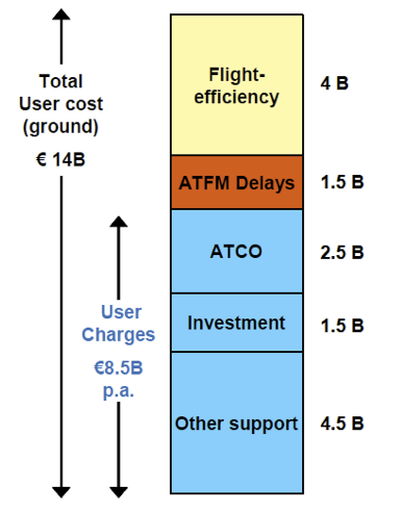 2010 was the first time that real ATM costs have fallen in a decade, partially thanks to the continued decline in European flight levels. However, there was a sharp rise in air traffic flow management delays, which meant the economic cost of air traffic management in Europe actually continued to rise.

The projection is that total European ANS costs will continue to increase, despite the national efficiency plans and the introduction of new SESAR technology to improve performance. 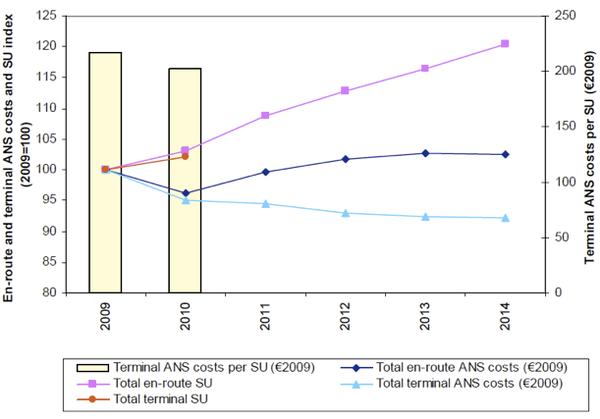 Calling European states out on a dismal record

Earlier this month, European Vice-President Commissioner for Transport Siim Kallas very publicly named European member states failing to deliver on the implementation of the SES. Mr Kallas said that SES has “consistently been my top aviation priority” since he took the role of transport commissioner in 2010.

Despite the pressure from the European executive body, EU member states “continue to fail to deliver” on unification of air traffic management networks according to Mr Kallas. Some states have performed well, but some of Europe’s largest aviation markets, including France, Germany and the UK, have been singled out as falling behind expectations.

The note hit by Mr Kallas must by now be a depressingly familiar one for European airspace users. Mr Kallas’ predecessor as transport commissioner, Antonio Tajani, also made SES his main aviation priority when he was appointed in 2008 and also experienced similar frustrations.

In one of his first addresses as commissioner, Mr Tajani said that resistance by European member states to SES had effectively rendered the existing SES legislation obsolete. As a result, the SES II package – designed to deliver a 10% improvement in efficiency per flight, cutting ERU2.4 billion and 16 million tonnes of C02 emissions p/a – was introduced in 2010.

The second package of legislation was designed to meet many of the concerns of European member states over sharing control and take account of local conditions, such as airspace complexity, investment cycles, previous cost efficiency plans, local constraints and policies. The legislative package also aimed to incentivise behaviour to lead to reform, at the same time as ensuring there was also a stick as well as a carrot. Concrete deadlines and performance targets were set – although many member states have yet to meet even their own downwardly revised targets – as well as enforcement provisions including “infringements” – bureaucratic code for fines – should the targets not be met. 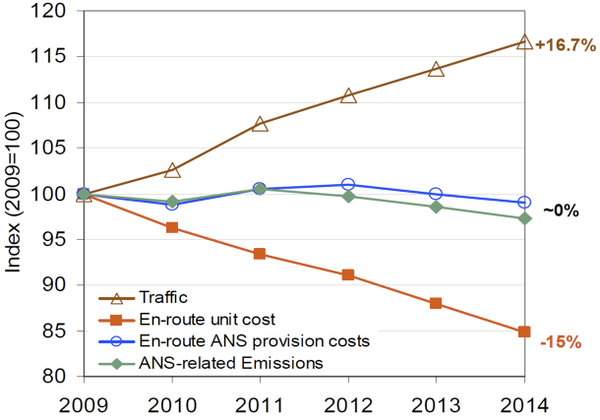 This threat of a sting in the tail in the legislation has clearly not been enough to overcome the political inertia in Europe. As a result, the EC has threatened that it could take “all enforcement actions possible”, including infringements “where necessary”.

MEPs said that national air traffic control spaces in Europe “urgently need to be merged so as to clear congestion, boost safety, reduce flight times, delays and fares, create jobs and cut CO2 emissions”. MEPs called for performance indicator schemes to be implemented and asked the EC to adopt a top-down approach by proposing new legislation, including possible sanctions and, where necessary, EU funding.

In 2011, the fragmentation of European airspace resulted in 17.9 million minutes of delays in air traffic flow management. Put another way, this is equivalent to 34 years worth of delays. Airlines endured an extra EUR4 billion costs due to sub-optimal cost-efficiency and fragmentation and there was 8.1 million tons of extra CO2 emissions. This is doubly galling to airlines as they are now being charged for emissions under the EU’s controversial Emissions Trading Scheme. 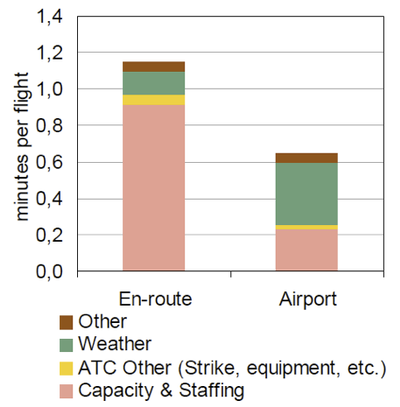 According to EUROCONTROL, European ATM costs an additional EUR2-3 billion p/a compared to other similar systems in the world. The closest direct comparison is with the US, which is able to control more flights across a similar area of airspace at less cost than in Europe. Even then, the US Federal Aviation Administration estimates that its own air traffic management reform programme, known as NextGen, can take USD23 billion out of air traffic management and airline operating costs over an eight-year period.

Other estimates are that SES can do even more. IATA believes an effective SES would shave as much as EUR5.5 billion off airlines’ fuel bills thanks to more efficient air traffic management. Air traffic management contributes around 12% of the direct costs of European airlines, whether through ATC charges, wasted fuel, delays or longer flight distances.

The plodding progress of ATM reform in Europe has not been because of any lack of encouragement on the side of the airlines or airports. Airlines representative bodies including IATA, the European Low Fares Airline Association, European Regions Airline Association and the International Air Carrier Association all welcomed the strong statement from Mr Kallas earlier this month. Airport groups have been just as voluble, led by ACI Europe.

The deadline for FAB formation, the cornerstone of the SES II programme, is less than six weeks away, and most blocks are unlikely to make the 04-Dec-2012 due date. Even if they were to meet their deadlines, FAB implementation in not a panacea. Reorganisation of Europe’s air traffic network will not guarantee that ANSP improve their efficiency or reduce their costs, or guarantee inter-FAB coordination and cooperation; but the impending failure of most FABs to meet their formation deadlines is symptomatic of how the SES programme is failing to deliver the benefits that it should because of a lack of action.

European airlines are calling for their governments to put SES back into motion. At a recent meeting of the Association of European Airlines, the representative group called for a more top-down approach, more ambitious cost reduction targets, stricter enforcement of compliance, increased competition and ATM market liberalisation and the acceleration of FAB and SESAR deployment.

The European Commission is hoping that the SES II+ package of legislation will prove that third time is lucky. After the failure of the first two legislative packages, lessons have been learnt and even if the SES II+ package that is to be introduced in 2013 can guarantee this, it will still have to overcome the political inertia that has characterised the SES programme for a decade. Unless European states come to the table, SES will prove to be a frustrated dream for Europe and an expensive nightmare for airlines.