After a brief break-out in the week commencing 22-Aug-2022, Europe's capacity recovery as a percentage of 2019 levels is back in the 86%-87% range that it had occupied for the previous 13 weeks.

Moreover, whereas that week witnessed a rare increase in seat capacity scheduled for the rest of 2022, there has been a cut to this outlook of 2ppts or more this week (commencing 29-Aug-2022).

Capacity projected for Europe in 4Q2022 has been trimmed from 88% to 86%, below the 87% projected for 3Q2022. This comes as COVID-19, and even operational issues, could be giving way to the economy as the main concern surrounding demand for air travel.

In the week commencing 29-Aug-2022, total European seat capacity is scheduled to be 32.4 million, according to OAG schedules and CAPA seat configurations.

This week's total seat capacity for Europe is split between 7.9 million domestic seats, versus 8.3 million in the equivalent week of 2019; and 24.5 million international seats, versus 28.9 million.

Once again, Latin America is now closer to 2019 capacity levels than any region has been since before the COVID-19 pandemic.

North America and Latin America have taken upward steps in the trend this week, while Europe, Middle East and Asia Pacific have taken downward steps. Africa is broadly level on last week. 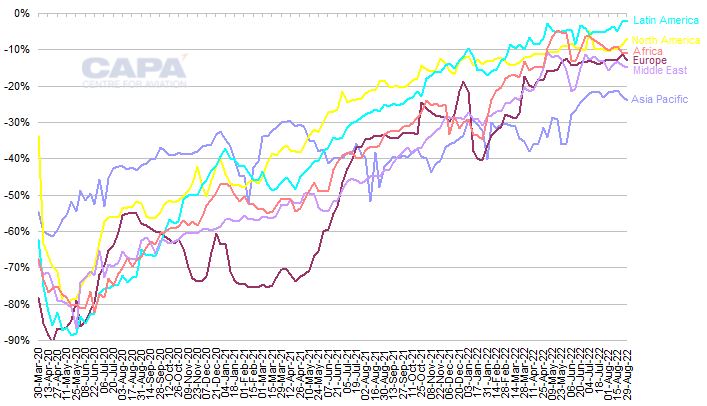 The improvement is continuing in 2022 so far.

This reverses last week's unprecedented example in the pandemic era of the current quarter's schedule being increased.

Looking ahead to 4Q2022, the projection has been cut to 86.3% from 88.2% in last week's projection, reversing two previous weeks of increases.

Capacity projections for every remaining month of 2022 have been cut by 2.0 to 2.5ppts.

3Q2022 capacity projections should not be trimmed much more…

This trimming of capacity scheduled over the rest of 2022 not only reverses the brief increase, but it is also of a significant magnitude.

Since the emergence from the most severe period of the Omicron wave of COVID-19, the regular pattern of capacity trimming tended to be at rates of 1ppt or less from one week to the next.

The pattern of previous quarters during the pandemic suggests that 3Q2022 will not change much from now, two months into the quarter.

However, capacity for 4Q2022 as a percentage of 2019 levels could have further to fall if the pattern of previous schedules one month before the start of the quarter continues.

For every quarter from 3Q2020 to 1Q2022, capacity projections one month before the start of the quarter were above the final outcome for the quarter by double digit percentage points.

This gap broadly narrowed with each quarter and fell to 7ppts for 2Q2022. If 3Q2022 remains close to what is currently projected, this gap will be around 4ppts.

If successive quarters continue to narrow the gap, 4Q2022 may be the closest yet to its projection of one month before.

However, it could still fall by a low single digit percentage point from the current projection of 86% to, say, 83%-85%.

Europe: projected seat capacity as a percentage of equivalent quarter of 2019 one month before quarter start and at quarter start, with final outcome (2020-2022) 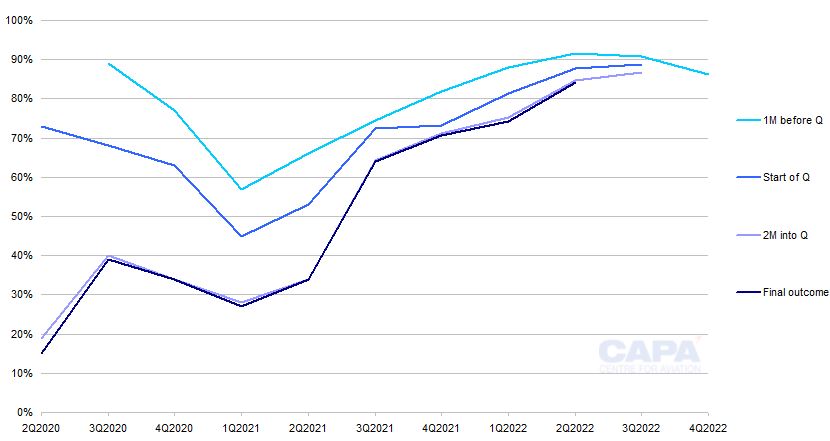 Of course, in real life capacity will not have any regard to these patterns but will be driven by operational and demand factors.

CAPA has previously suggested that COVID-19 itself is no longer having a significant impact on reducing demand. Rather, operational issues relating to labour shortages and other supply chain constraints have held back the capacity recovery in Europe.

In addition, the current cuts to capacity projections for the rest of 2022 come as the economic outlook is weakening.

In a European context, this clouding of the economic horizon can be seen in softening Purchasing Manager Index data.

The S&P Global Flash Eurozone Composite PMI fell from 49.9 in Jul-2022 to 49.2 in Aug-2022. A figure below 50 signals a reduction in business activity, and this was the second successive month of falling activity after 16 months of growth.

The S&P Global/CIPS Flash UK Composite PMI fell from 52.1 in Jul-2022 to 50.9 in Aug-2022. A figure above 50 signals economic expansion and this was the 18th successive month of growing business activity in the UK.

However, this was the lowest figure in that period and only marginally above 50. If the downward trend continues, the UK could soon fall into a contraction of business activity.

The economy is the key demand driver once more

The impact of COVID-19 on demand could reassert itself if further new variants of concern were to emerge and operational issues continued to weigh on Europe's capacity recovery.

Nevertheless, European aviation is set to return to the pre-COVID era, in that economic conditions are once more likely to be the key drivers of demand for air travel.