Europe: aviation capacity recovery to remain on a plateau through peak summer

Europe's aviation capacity recovery, measured by weekly seats as a percentage of the equivalent week of 2019, has not moved much in recent weeks.

Europe's seat capacity is at 86.5% in the week commencing 20-Jun-2022, which is a shortfall of 13.5% against the equivalent week in 2019. This is almost exactly the same as four weeks ago, since when it has remained within a percentage point either side of this level.

As a result of staffing and recruitment challenges, Europe's capacity recovery seems likely to continue to plateau through the peak northern summer months.

In the week commencing 20-Jun-2022, total European seat capacity is scheduled to be 31.1 million, according to OAG schedules and CAPA seat configurations.

This week's total seat capacity for Europe is split between 7.7 million domestic seats, versus 8.2 million in the equivalent week of 2019; and 23.4 million international seats, versus 27.8 million.

Europe remains in fourth place in the ranking of regions this week, measured by seats as a percentage of 2019 levels.

All regions have taken upward steps in the trend this week, with the sole exception of North America, which is broadly flat on last week. 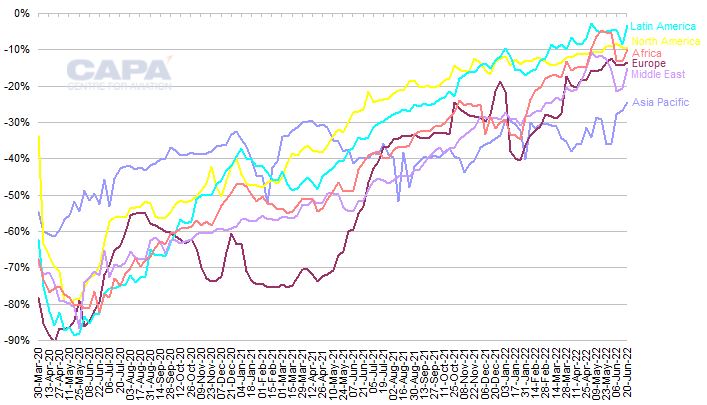 3Q2022 capacity projections are likely to be trimmed further

Capacity projections for the peak summer quarter, 3Q2022, have been fairly stable over recent weeks in comparison to previous quarters during the coronavirus pandemic at a similar stage.

Nevertheless, the projection of 89.4% is 3.1ppts lower than it was two months ago. More than half of this reduction has happened in the past three weeks.

As the quarter draws near and starts to unfold, there is likely to be further trimming of capacity as a result of the cancellation of some previously scheduled flights.

The difficulty of implementing planned capacity increases against a backdrop of recruitment challenges has been well documented in recent weeks, leading to many headlines about cancellations at short notice.

In order to minimise the resultant disruption, some airlines and airports are taking steps to limit capacity by implementing flight cancellations much further in advance than has been the case recently.

For example, London Gatwick Airport plans to control the increase in its capacity during the peak holiday season, starting with a cap of 825 daily flights in Jul-2022 and up to 850 daily in Aug-2022. These numbers compare with 870 to 890 daily flights in the equivalent months of 2019.

According to schedules data from OAG/CAPA, Gatwick is currently projected to be at approximately 91% of 2019 frequencies in Jul-2022 and just under 95% in Aug-2022. The percentages for seat capacity are slightly lower, since there are proportionately fewer long haul flights.

Amsterdam Schiphol has announced the capping of daily passenger numbers to 67,500 on the busiest days in July and 72,500 in August.

Schiphol said on 15-Jun-2022 that it had too few security employees to process the number of travellers wanting to fly this summer. In the outlook for Jul-2022 there were 13,500 daily seats scheduled in excess of its security capacity. According to OAG/CAPA, Schiphol is projected at approximately 89% of 2019 seat numbers in Jul-2022 and 90% in Aug-2022.

KLM, which is Schiphol's biggest airline customer, is projected at similar percentages in the two busiest summer months.

easyJet's biggest airport is Gatwick, while Schiphol is also a major base for the airline.

As a consequence of capacity limits at airports and recruitment delays within the airlines, easyJet has scaled back its seat capacity plans. On 20-Jun-2022 the low cost airline group announced that its calendar 3Q2022 seat capacity is to be reduced from 97% to 90% of 2019 levels.

It also said that bookings for the peak summer quarter were "broadly in line with where we were at the same point" in 2019, with 48% sold.

…but this is not yet in OAG schedules

However, capacity derived from currently filed schedules with OAG and CAPA seat configuration data indicates that easyJet is still projected at 98% of 2019 seat numbers for 3Q2022.

Next week's schedules data will therefore likely to project lower numbers for easyJet.

It will be interesting to see whether bookings continue in line with 2019 levels, given what the airline calls "consolidating a number of flights across affected airports". The airline hopes that the advance notice and its high frequency network will enable the majority of passengers to rebook on alternative flights.

However, adverse press coverage may have some negative impact on demand.

* These values are at least partly predictive up to 6 months from 20-Jun-2022 and may be subject to change.
Source: CAPA - Centre for Aviation, OAG.

Europe's capacity recovery is set to remain on a plateau

EasyJet does not represent the whole of European aviation but it is the sixth largest airline group in the continent (fifth largest in Western Europe). The example of easyJet suggests that the 89.4% projection for European seat capacity in 3Q2022 is likely to be trimmed further.

As such, it can be observed that Europe's capacity recovery may continue to plateau in the 85% to 87% range of recent weeks through the peak northern summer period.