Europe's seat capacity is at 86.4% in the week commencing 27-Jun-2022, which is a shortfall of -13.6% against the equivalent week in 2019. This is the sixth successive week in a narrow range, signalling a levelling-off of the capacity recovery towards 2019 levels.

As 2Q2022 draws to a close, its seat numbers will end up at 84.3% of 2019 levels, continuing an improving trend over five successive quarters. Seat capacity for 3Q2022 is currently projected at 88.8%. Projections are now more stable and more realistic than at earlier stages of the COVID-19 pandemic.

However, further modest trimming of this peak summer quarter is likely, given staffing constraints. The final outcome for 3Q may not exceed 2Q's percentage by much – if at all.

In the week commencing 27-Jun-2022, total European seat capacity is scheduled to be 31.5 million, according to OAG schedules and CAPA seat configurations.

This is only 1.1 ppts below the level of -12.5% reached four weeks ago, which was Europe's strongest week on this measure since before the pandemic. However, it is the sixth successive week in a range between -12.5% and -14.4%.

This week's total seat capacity for Europe is split between 7.6 million domestic seats, versus 8.2 million in the equivalent week of 2019; and 23.9 million international seats, versus 28.3 million.

This week (week of 27-Jun-2022) Europe has dropped from fourth to fifth place in the ranking of regions measured by seats as a percentage of 2019 levels.

Asia Pacific, Middle East and Africa have taken upward steps in the trend this week, whereas North American and Latin America have taken downward steps and Europe is broadly flat on last week. 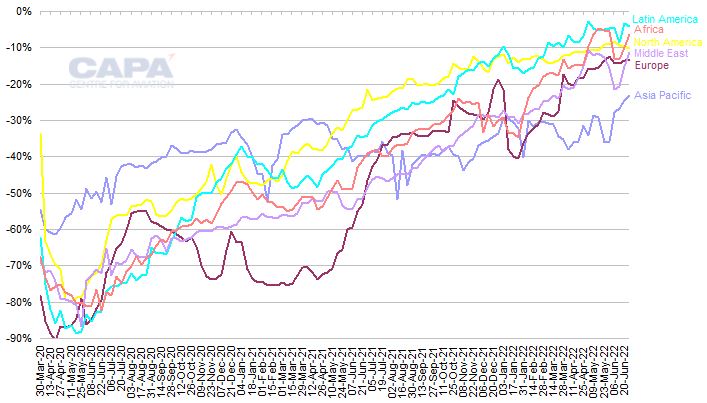 As CAPA has previously noted, schedules looking out over the next few months have become both more stable and a more realistic forecast of the seat capacity that will actually be deployed.

In the early quarters of the pandemic, capacity projections of seat capacity as a percentage of the equivalent quarter of 2019 were cut by double digit percentage points in the month leading up to the start of each quarter.

Capacity projections have also fallen from the start of the quarter to the final outcome throughout the pandemic, but the pattern has also generally been a narrowing one.

Europe: projected seat capacity as a percentage of equivalent quarter of 2019 one month before quarter start and at quarter start, with final outcome, 2Q2020 to 3Q2022. 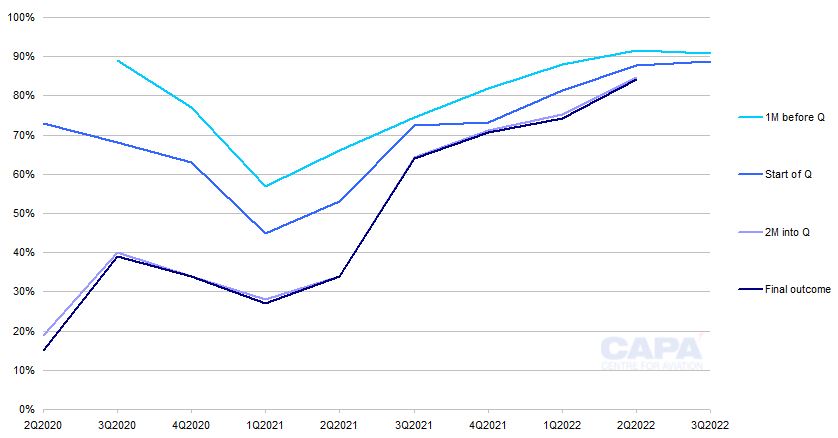 CAPA has also observed that further trimming of the peak summer schedule, which falls in 3Q2022, is likely as a result of staffing and recruitment challenges.

In absolute terms, Europe's weekly seat capacity should continue to rise into the seasonal peak from late July to early September. However, as a percentage of the equivalent period of 2019, the recovery may not exceed the 86% to 87% range of recent weeks. The final outcome for 3Q2022 may be slightly higher than 2Q's 84.3%, but not by very much.

This suggests a further decline in 3Q2022 seat numbers as a percentage of 3Q2019 of 2-3ppts by the end of the quarter. This would be broadly similar to the two most stable quarters since the start of the pandemic.

The recovery in Europe's capacity towards 2019 levels is losing momentum while staffing problems are addressed, but greater stability is returning to the schedules.