EUROCONTROL announced at the beginning of Sep-2011 it is ready to assume the position of European Network Manager, a key role that will help determine the shape and operation of European airspace under the Single European Sky.

In the wake of the eruption of Iceland’s Eyjafjallajökull volcano in early 2010, it was clear there was much to be desired in regard to the coordination of Europe’s airspace. The differing national responses to the volcanic ash contamination and the rolling, initially ill-coordinated shut-downs of European airspace led to more than 100,000 flight cancellations and drew the ire of many airspace users, particularly from some of Europe’s largest commercial carriers.

The eruption demonstrated the need to create a centralised entity able to take the lead in coordinating the management of airspace and overseeing measures at local, regional and network levels to mitigate such events, as well as ensuring that such crises were better handled in the future. As the ash cleared and airline operations returned to normal, the European Commission decided the crisis had shown it was necessary to accelerate certain provisions of the second phase of the Single European Sky legislation. One of the major outcomes was the need to fast track the implementation of the Network Manager position.

In 2010, EUROCONTROL was invited to fill the Network Manager role. By Jul-2011, the European Commission laid down detailed rules for the implementation of air traffic management (ATM) network functions and amended existing regulation to fit the establishment of the Network Manager.

As Network Manager, EUROCONTROL's goal is to continuously improve ATM network operations within the Single European Sky. The organisation will hold responsibility for a number of key tasks. It will act as the central unit for air traffic flow management across Europe, allocating “scarce resources” such as radio frequencies and transponder codes. In doing so, it will ensure European airspace can accommodate additional capacity needs, as well as seamlessly integrating airport operations into the European network. This will give the agency a major role in airport slot coordination and allocation, and it will coordinate with airport authorities.

Under its role as Network Manager, EUROCONTROL will monitor, report and forecast the performance of the European ATM network. This will be based on the agreed EU-wide performance targets agreed to in Dec-2010 by the Single Sky Committee. The agency already provides extensive reporting and monitoring of European airspace, including performance benchmarking for European air navigation service providers, traffic flow monitoring and aircraft movements and delay forecasting.

As part of this, EUROCONTROL will also “develop, maintain and implement” a European network strategy plan, a detailed network operations plan and a European route network design. These will help ensure the airspace design solutions developed at a local, state or Functional Airspace Block level match the European network efficiency requirements and that all airspace users can fly optimal trajectories.

EUROCONTROL will also support the deployment of technological improvements across the European ATM network, notably the SESAR joint undertaking, which provides the technical backbone to SES.

Over 2010, EUROCONTROL underwent a reform programme to adapt itself to the changing political and operational context, in preparation of the role of Network Manager.

EUROCONTROL’s latest short-term outlook for European IFR air traffic movements, released in May-2011, forecasts a 3.2% increase in flights across Europe in 2011. This is a slight downward revision from its earlier forecast, thanks to the disruption in North Africa and the Middle East earlier in the year. These disruptions are expected to have cut approximately 1% of European air traffic in 2011. 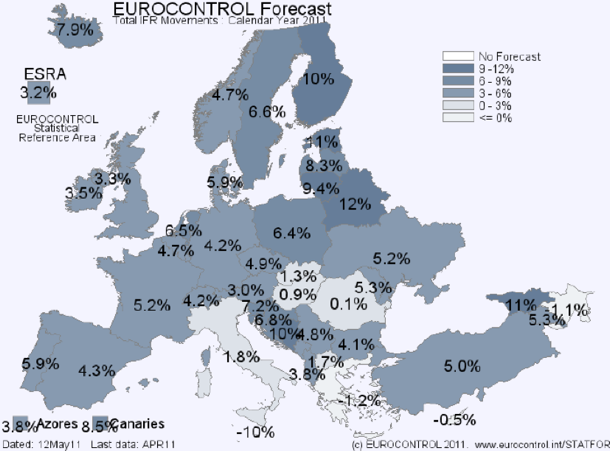 The underlying traffic growth over the first six months of 2010, taking into account the poor weather and ash-cloud crisis of early 2010, has been around 2%. The instability of oil prices – swinging more than USD40 per barrel over Aug-2011 – and the European debt situation are expected to have a continued impact on European traffic. Certain markets, such as Greece, are experiencing falls in aircraft movements as they enter recession. While overall European GDP forecasts are between 1.3% and 1.75% for 2011, the economic recovery is expected to be gradual and uneven.

The strongest aircraft traffic growth is forecast in the Nordic and Baltic countries, as well as around the northern Balkan Peninsula, due to shifting traffic overflight patterns.

Strong growth is also anticipated for some of Europe’s largest air travel markets. Traffic growth in Germany, the UK, France and Turkey are expected to contribute considerably to the overall increase in flights in 2011.

Additional IFR movements by European state: Feb-2011 to May-2011

While growth has been at the low end of EUROCONTROL’s forecast range and economic uncertainty lingers, traffic forecasts by European airlines are still relatively bullish.

The Association of European Airlines, representing 36 full-service carriers, reported traffic for the first five months of 2011 was up almost 10%, while capacity was up 10.9%. The AEA’s provisional figures for Jun-2011 indicate “another month of buoyant traffic”, including a double-digit increase in intra-European traffic volume contributing to an estimated overall growth of approximately 7.5%. The association’s outlook for Jul-2011 was “similarly robust”.

According to IATA, while the European debt crisis continues to deliver economic uncertainty, European airlines are benefitting from a “strong expansion of inward demand”, taking advantage of the weaker euro.