Eurocontrol’s impressive medium term forecast of flight numbers in Europe, covering 44 markets for the period 2012 to 2019, sees an average growth rate of 2.3% p.a. under its base case. It contains a number of key points concerning recent trends and the outlook for European airlines. Eurocontrol sees the weak traffic environment of 2012 continuing in 2013, with another year of falling flight numbers and winter seasons especially weak. However, it forecasts a recovery in 2014 and that Turkey will lead the superior growth of Eastern countries both in 2013 and through to 2019. Airport capacity constraints and competition from high speed rail are forecast to cut 1.6% from the total of flights in 2019.

For charter carriers, 2012 brought some welcome relief as flight numbers recovered from the impact of the Arab Spring in 2011, although they are still on a longer term downward trend. Traditional carriers saw a fall in their share of flights in 2012 and this looks set to continue as LCCs are projected to increase their share further (especially in Central and Eastern Europe). The main point of comfort to traditional carriers is that growth rates to destinations outside Europe are forecast to be higher than within Europe.

Eurocontrol is an intergovernmental organisation of 39 member states, founded in 1960 and styling itself as the European Organisation for the Safety of Air Navigation. It publishes regular short term (two year), medium term (seven year) and long term (20 year) forecasts of the number of flights in 44 markets across Europe.

As an air traffic management body, its focus is on the number of flights, or air traffic movements, and it does not forecast passenger numbers. References to traffic in this analysis are therefore related only to the number of flights. References to ESRA08 essentially mean the whole of Europe as defined by Eurocontrol (see chart below). This analysis is based on the medium term forecast published on 04-Mar-2013 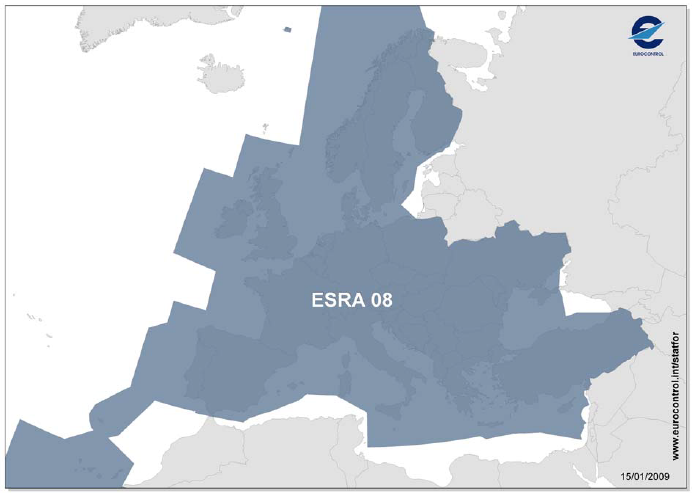 The number of flights in Europe fell by 2.4% in 2012, bringing total traffic levels to 5.3% below the peak level of 2008. Domestic traffic was especially weak.

Economic weakness and a number of airline failures contributed to the decline in 2012 and these factors are forecast to have an impact on 2013 traffic levels. Eurocontrol forecasts a further decline in movements of 1.3% in 2013 before modest growth resumes in 2014 to 2019. Eurocontrol expects the 2008 peak to be passed only in 2016 and the level in 2019 to be 17% higher than in 2012.

Winter traffic is getting weaker

Traffic levels in 2012 were below the forecast published by Eurocontrol in Feb-2012, with the end of winter 2011-2012 and the start of winter 2012-2013 being weaker than expected. November 2012 saw a fall of 3.7% across Europe compared with a year earlier. This accentuating of the pattern of seasonality is not surprising in times of economic difficulty, when low season routes are a challenge for airlines to justify financially.

Actual traffic of 2012 compared with the forecast of Feb-2012

Growth rates varied hugely by country in 2012, as illustrated in he chart below, which shows flights in 2012 compared with 2011 (excluding overflights). Turkey added the highest number of flights, followed by Norway (presumably boosted by the growth of Norwegian Air Shuttle), Poland and Ukraine (the latter two benefiting from the Euro 2012 football tournament).

Spain removed the most flights from the network in 2012, followed by Italy, Germany and the UK. Hungary’s loss of national carrier Malev also led to a significant decline in traffic.

Russia was the fastest growing top destination outside Europe

In terms of the top destinations outside the Eurocontrol Statistical Reference Area (ESRA08), Russia has been the most important over the past year by flights added year on year, although it is growing at a slower pace than in 2011. By contrast, the United States has been the biggest loser in terms of flights from Europe.

Flights to Egypt suffered badly in 2011 in the aftermath of the Arab Spring, but recovered in the first half of 2012 before returning to a stable year on year pattern in late 2012. The UAE continues to see a steady pace of additional flights at around 20 per day, reflecting the ongoing growth of Emirates and Etihad.

Charter airlines bounce back from the Arab Spring; LCCs continue to gain share

Looking at market segments, charter carriers (non-scheduled) had a positive year of growth in 2012, growing flights by 2.8%, after suffering heavy declines in 2011 due to the Arab Spring events. Nevertheless, in spite of the recovery in their share of flights from 5.1% in 2011 to 5.4% in 2012, charter carriers are still on a long term downward path (they had 6% in 2009).

Mediterranean routes to be main losers in 2013

Turning to the 2013 forecast in a little more detail, Eurocontrol expects a fall in flight movements of 1.3% in its base case. Its low case is a fall of 2.9% in the event that the economy weakness further and more airlines fail. Its high case sees growth of just 0.1%, if traffic trends improved in the summer and were maintained into the next winter. Weakest growth is forecast in the Mediterranean region, where leisure travel demand remains soft. Most major western European countries are forecast to see falling traffic levels in 2013.

On the positive side, Turkey is forecast to see an increase in flights of 9.8% in 2013, reflecting to a large extent planned fleet expansion at Turkish Airlines and others in that country. Eurocontrol forecasts 8.4% growth in Malta, an exception to the weak Mediterranean region, although this is linked to growth of overflights following declines during the Libyan exclusion area that was still active at the beginning of 2012. 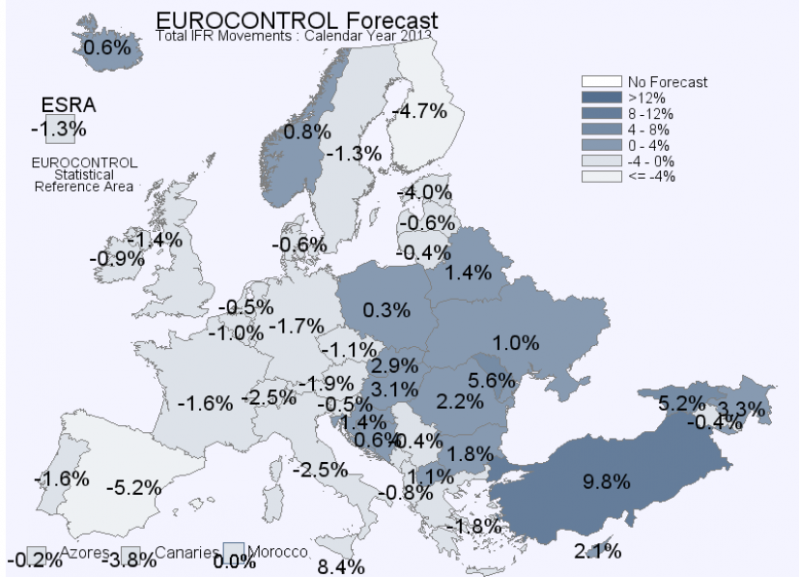 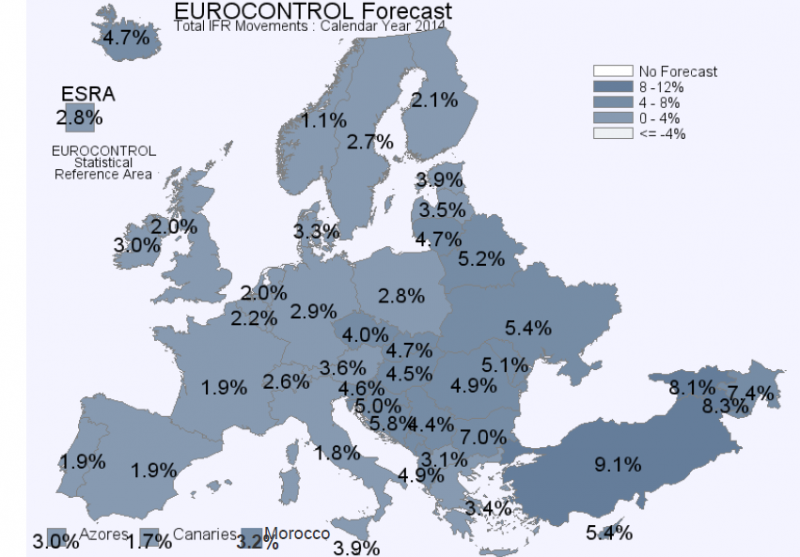 Growth is expected to stabilise at around 2.9% after 2014, with the same east/west divide that has characterised recent years. Forecast growth rates for the period to 2019 are projected to be higher in the east, with Turkey expected to see flights grow at an average annual rate of 7.0% p.a. and a number of the former Soviet and Eastern Bloc countries forecast to grow at average rates of more than 4%.

By contrast, the fastest growing western European country (excluding smaller island nations), in terms of the number of flights to 2019, is Ireland, with a forecast annual average growth rate of 2.5% p.a. The five biggest western European countries are all forecast to see growth averaging 2% or less – just 1.4% p.a. for Spain. These different growth forecasts largely reflect expected economic growth rates and the relative under penetration of air travel in East Europe.

Nevertheless, although western Europe is expected to see slower growth rates in percentage terms, the size of the western countries in terms of the number of flights still means that they will see the highest number of additional flights per day in absolute terms between now and 2019. Both Germany and Turkey are forecast to add more than 1,000 flights per day by 2019. 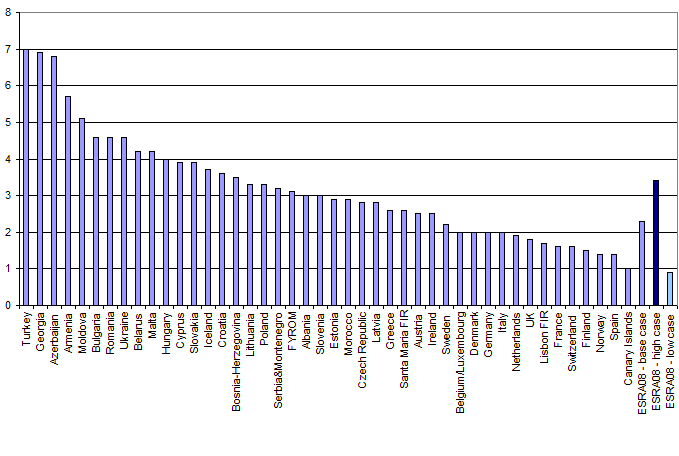 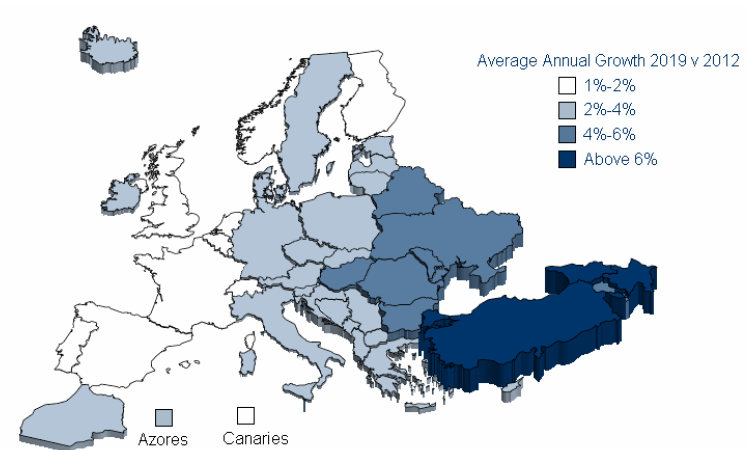 Eurocontrol forecast of additional flight movements by state 2019 vs 2012 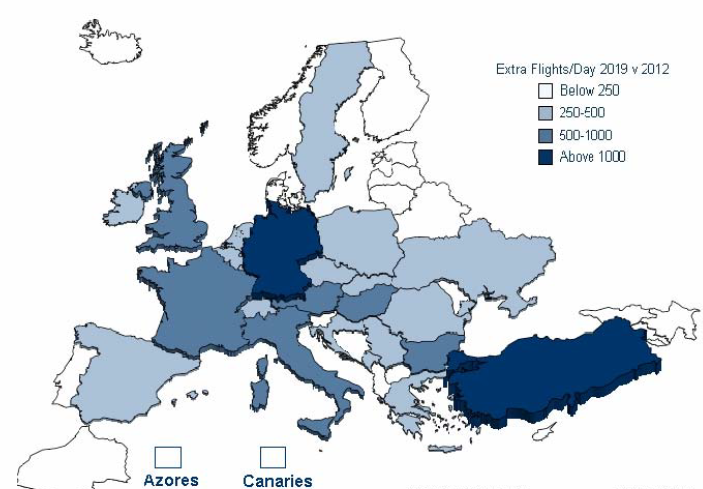 Although Eurocontrol forecasts growth rates to recover from 2014, it does not see these growth rates returning to their long term average of around 4% p.a. Moreover, after five years of negative or below average growth rates, the number of flights is not forecast to return to its pre-2009 long term trend. 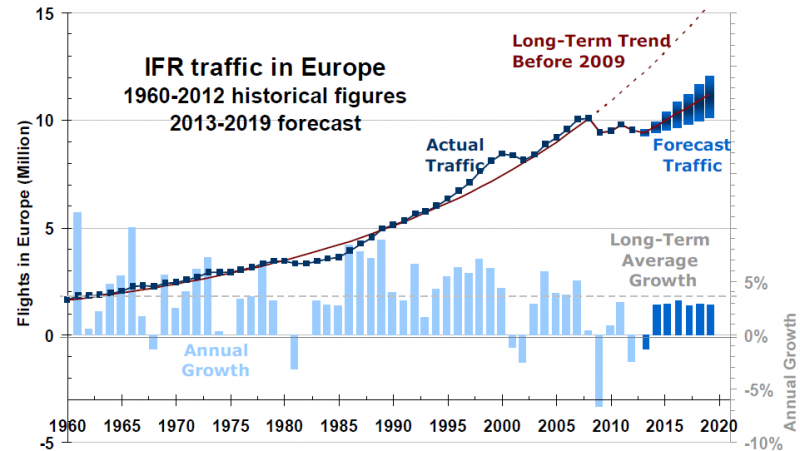 Although GDP growth is the fundamental driver of air traffic growth, there are infrastructure-related factors that will limit the increase in flights, including airport capacity and competition from high speed rail. Airport capacity constraints (mainly in Norway, UK, France, Switzerland and Germany, according to Eurocontrol) will reduce the number of flights by around 135,000 flights by 2019, a 1.2% reduction in growth over 2012-2019.

Eurocontrol estimates that competition from expanding high speed rail networks across Europe will reduce flight growth by just 0.4% over the period to 2019, but the effects will vary significantly by country.

Eurocontrol forecasts that LCCs will increase their share of flights in almost every country by 2019, with the biggest market share gains predicted to be in Eastern and Central European countries. Among the major western countries, it sees very little increase in LCC share in the UK and Spain, where penetration is already very high at 47% and 54% respectively.

By contrast, Germany (30% LCC flight penetration) offers an additional 6ppt of market share for LCCs by 2019 in the view of Eurocontrol. France, the least penetrated major European market by LCCs, is forecast to offer an increase of 4ppt to 25% by 2019.

Load factor gains forecast to continue, albeit at a slower pace

In all three scenarios, it sees 2019 load factors being higher than in 2012. However, load factors are already at historically high levels and further improvements are likely to be at a slower pace. This could be a driver of faster growth in flight numbers.

Load factors have been highest on long-haul, particularly on the Atlantic and routes to Asia/Pacific destinations and this is forecast to continue. 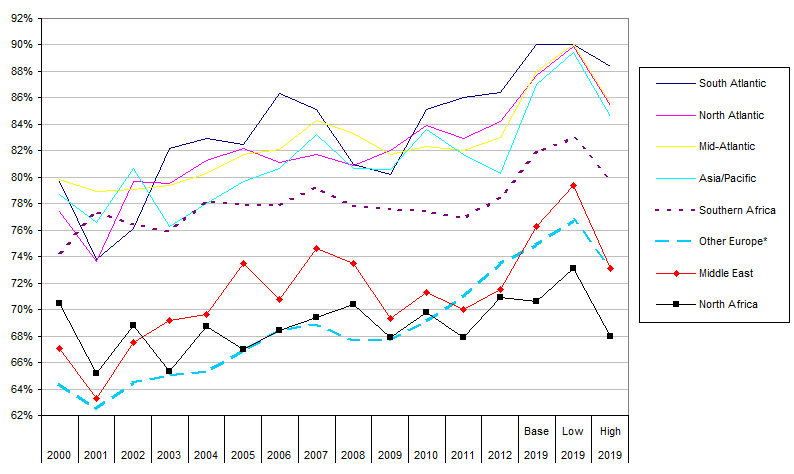 Data for 2012 based on year to November
Source: Actual: AEA, IATA. Forecast: STATFOR analysis and modelling

Internal flights within Europe are by far the most important category, accounting for 79% of flights in 2012. However, this has fallen from 81% in 2008 and is forecast to fall further, to 76% in 2019. Flights that arrive or depart in Europe accounted for 20% of flights in 2012, forecast to grow to 23% in 2019, while overflights were just over 1% in 2012 (forecast for 2019 to be almost 2%). For airlines with operations in Europe, the message is that growth rates will be stronger for flights outside Europe than within Europe. 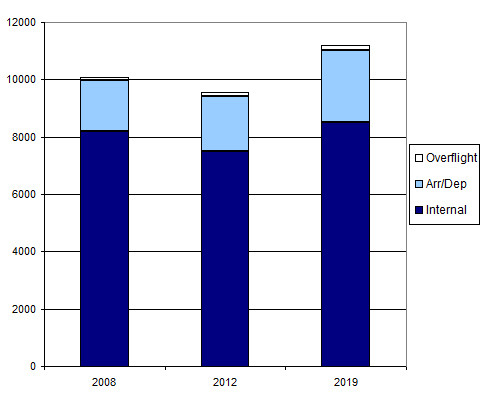 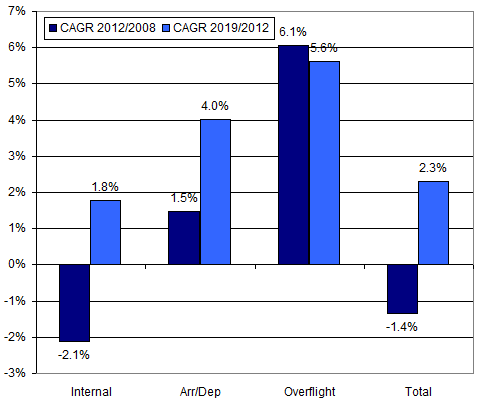 Eurocontrol cautions that there are both upside and downside risks to its forecasts and these are reflected in the high case and low case forecasts.