Since reporting its maiden profit in 2011, Etihad Airways' financial results have shown steady and solid growth, even in the face of less than certain global economic conditions. The carrier’s 1H2013 results suggest the strength of its ‘equity alliance’ strategy, with the airline recording record double-digit growth in the period, with a particularly strong contribution from its partner airlines.

Revenue is at record levels, but the carrier only discloses bottom line results on an annual basis.

The carrier’s equity and codeshare partners – now numbering more than 40 airlines and the French rail operator SNCF – generated USD184 million in passenger revenue in 2Q2013, around 20% of total revenue. Partnership revenue in the quarter was up 25% year-on-year. This was similar to the 1Q2013 performance, when its partners generated USD182 million in revenue, an increase of more than a third over the previous corresponding period.

A cornerstone of Etihad's expansion strategy has been its inter-airline relationships. Here it has been a trail-blazer in both the breadth and the nature of its agreements. The partnerships are showing solid bottom line returns, according to the carrier. In this process, it is creating its own ego-centric grouping, structured in such a way as to open up separate markets, allowing penetration behind the initial foreign gateways.

Significantly, the pursuit of this strategy has largely ignored the demarcations previously placed around the longer-standing global alliances. Thus, while its first large equity investment, in Air Berlin, involved a oneworld airline, most of its financial partners are independents.

However, more recently, following a form of reconciliation of convenience with Air France - previously the Gulf airlines' loudest detractor - Etihad has also moved towards closer links with SyTeam's KLM and Kenya Airways. Yet this has occurred almost simultaneously with new agreements with Star Alliance's South African Airways and Air Canada, also previously a major opponent of the UAE's role in aviation.

The strategic bottom line is that, as its influence spreads, Etihad is increasingly able to be selective in its partnerships, allowing it to gain increasingly better coverage of diverse markets.

During 2Q2013, Etihad entered a new codeshare deal with Jat Airways and announced new partnerships with Air Canada, South African Airways and Belavia, all to take effect during 2Q2013. It also expanded codeshares with carriers including KLM, Air France, Aer Lingus and Alitalia. With the latest additions, Etihad Airways will expand its number of codeshare partners to 45 and boasts a “virtual global network of more than 350 destinations, the most comprehensive of any alliance or Middle Eastern airline.”

The new routes and codeshare partnerships have added 42 destinations to Etihad Airways’ network over the past 12 months.

Etihad Airways' equity partners are Aer Lingus, Air Seychelles, airberlin and Virgin Australia. Formalisation of a major equity deal with Jet Airways is also imminent, although final approval is subject to the complex wheels of Indian bureaucracy. During 2Q2013, Etihad Airways also signed an initial MoU with the Serbian Government to discuss potentially investing in JatAirways.

Etihad Airways president and CEO James Hogan said the reported growth “reflects not only the continuing popularity of our Abu Dhabi hub, but the growing maturity of our airline partnership strategy and the strength of our cargo operations”. Mr Hogan also noted that a significant achievement in the second quarter was the improved contribution of the equity alliance partners, particularly airberlin, which has become the largest codeshare contributor.

Etihad has also continued to grow rapidly in its own right. Passenger traffic (as measured in RPKs) increased 13% in the second quarter and 15% for the first half of the year. Capacity (as measured in RPKs) also rose 13% for 1Q2013, and 12% for 1H2013, driven by the delivery of new aircraft and opening of new routes.

Etihad Airways increased its network by adding new services to Amsterdam, Sao Paulo and Belgrade and adding more capacity to Washington DC late in Mar-2013. Despite the expansion, load factors weakened only slightly in the second quarter, down 0.3 ppts to 77.3%

The cargo traffic growth is particularly notable in contrast to the global trend. According to IATA’s Jun-2013 industry forecast, global cargo revenues are expected to be static for 2013. In the association’s May-2013 traffic report, IATA’s director general and CEO Tony Tyler labelled air cargo as a market in “suspended animation at the moment”.

By comparison, cargo growth in the Middle East is one of the air freight industry’s few bright spots. 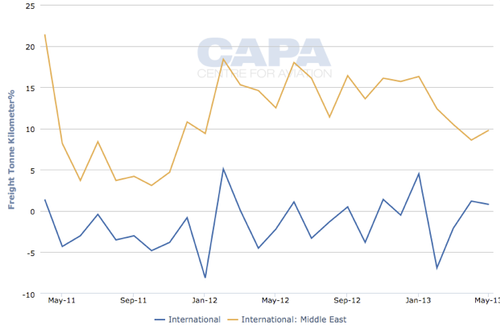 Etihad’s fleet expanded to 78 aircraft by the end of 2Q2013, 11 more than at the same point in 2012. According to the CAPA Fleet Database the carrier took delivery of eight new aircraft in 1H2013 and is due to take delivery of another four aircraft – two A320s and two 777s – over the second half of the year.

Consolidating on a winning strategy, for Etihad and for Abu Dhabi

Etihad’s latest traffic and financial figures show an airline that is consolidating on its three tier strategy of rapid organic growth, selected codeshares and strategic investments to expand its global reach. The partnership strategy combines not only enhancements for the carrier’s headline revenue figures, but delivers improved bottom line results, through cost savings delivered by operational synergies.

With its ‘virtual network’, Etihad Airways seeks to minimise risks inherent in expansion, while the prospect of an equity partnership is a powerfully attractive option for the carriers it has primarily targeted. For Etihad, the equity partnerships allow it to gain access to behind gate markets across the world without needing to deploy its own assets or aircraft.

In doing so it in some ways mimics the process of entering the formal alliance network where larger and much longer established airlines tend to dominate strategic directions. The advantage of Etihad's more tailored and ego-centric approach is however to allow it to be much more specific in its targeting of each market. The centricity of Etihad also allows it to put propositions to its partner airlines that are much more compelling than in the more diffuse global alliance partnerships. In particular, an area where the global alliances have struggled is in using the potential group buying power to acquire big ticket items.

Etihad meanwhile is moving ahead with joint purchasing of aircraft, where, despite a willingness to operate the same aircraft type, global alliance members typically disagree on configurations and fitouts, undermining the rationale for joint moves. The outcome should be therefore to provide increasingly seamless operation between the partners.

These partnerships also funnel traffic through Abu Dhabi, increasing the emirate's attractiveness as a hub and contributing to the overall economic prosperity. Abu Dhabi Airports Company continues to register double-digit growth in traffic, and ever increasing spend per passenger. 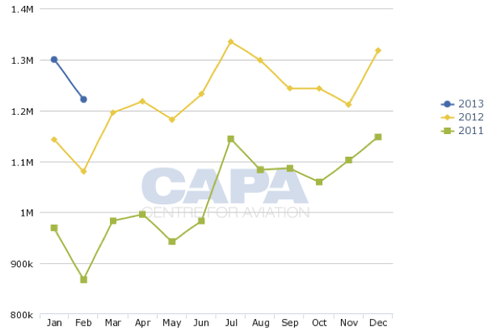 Etihad’s chief strategy and planning officer noted in Jun-2013 that the carrier will continue to add “breadth, depth and scale” to its expanding global route network, offering significantly improved connection opportunities through its Abu Dhabi home base. As the carrier continues to add partnerships and makes more investments, the scale of its operations generate synergistic benefits.

The carrier is ahead of the field in terms of the number and extent of its equity investments; this appears to be an appropriate model for the time, but there are risks inherent in such arrangements. In the past the concept has not fared well. Etihad does however appear to be fashioning an equity profile that delivers value both to itself and to its partners. This, added to the fact that in several of the relationships Etihad is in a position seemingly to influence outcomes in ways that have substantial mutual benefits, should help anchor the relationships.

The Abu Dhabi-based carrier may not yet be in a position to challenge its regional competitors Qatar Airways and Emirates in terms of organic capacity, but its collaborations are building the fastest growing carrier in airline history. And, in doing so, establishing an alliance model appropriate for today's aviation environment.