Unlisted Etihad Airways announced its proposed partnership with Virgin Blue will provide customers in Kuwait with an expanded global network and increased opportunities to travel throughout Australia, New Zealand and the Pacific Islands, and to Asia and Los Angeles.

The partnership will also offer increased loyalty rewards through its fully reciprocal Etihad Guest and Velocity frequent flyer programmes, along with reciprocal service benefits and lounge access for top-tier members of both programmes. The ability for members to burn miles on both carriers' services comes into effect from 01-Oct-2010. The carrier launched a fare sale to promote the agreement.

Air Zimbabwe's summoned its pilots to appear for hearings for embarking on an "illegal strike". The pilots have been charged with contravening Section 4(a) and (b) Statutory Instrument 15 (2006) of the National Employment Code of Conduct, citing "willful disobedience to a lawful order" and for "an act of conduct or omission inconsistent with the fulfilment of the expressed or implied conditions of contract". The hearings did not take place because management was re-drafting the letters summoning them to the hearings. 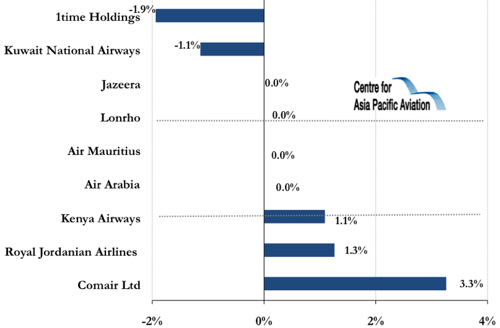