Ethiopian Airlines plans to expand its Asian network with the addition of Ho Chi Minh City, Manila and Seoul Incheon from 18-Jun-2013. Hong Kong will also become a direct route from Addis Ababa, rather than operating via Bangkok. But those plans could come unstuck if the grounded 787 fleet is not cleared to return to service by then.

Ethiopian intends to operate Ho Chi Minh, Manila and Seoul Incheon via its two existing Asian hubs, Hong Kong and Bangkok. Seoul and Manila will be an extension of the new direct Addis Ababa-Hong Kong route and Ho Chi Minh is added to the Addis Ababa-Bangkok service. Recently added Kuala Lumpur via Bangkok will be expanded with a fourth frequency from 24-Jun-2013.

Ho Chi Minh and Manila will be served three times weekly while Seoul will have four weekly frequencies. All routes will be operated using Boeing 767-300ER aircraft according to the 12-Feb-2013 GDS timetable and inventory display.

Meanwhile, Ethiopian has also announced plans to link South America with Guangzhou over Lome and Addis Ababa, providing one of the most efficient connections on the operationally difficult route.

If the GDS display is correct in showing the 767 on the direct Hong Kong route, Ethiopian is presumably prepared to accept some capacity restrictions. The 767-300ER cannot reach Hong Kong non-stop with a full load due to take-off restrictions from Addis Ababa’s runway which is located 7,000 feet above sea level.

Ethiopian’s fleet of four Boeing 787s are caught up in the global grounding of the type following two high profile on-board battery malfunctions. Without these aircraft, Ethiopian’s five 777-200LR would not have sufficient capacity to cover its existing long-haul network to Beijing, Guangzhou, Toronto and Washington Dulles, as well as a direct Hong Kong service.

Ethiopian may be hoping that the 787s will be cleared to fly before the Jun-2013 Addis Ababa-Hong Kong launch or face postponing the start of the network expansion. This could explain the lack of promotional publicity trumpeting the new destinations, other than their being opened for bookings.

One option might be to switch Guangzhou back to a 767 via Bangkok as it has done before. However, that could be a difficult choice given that demand to Guangzhou easily outstrips that of Hong Kong.

China-Africa is one of the world’s fastest growing markets and Ethiopian’s Addis Ababa hub is well positioned to exploit this growth as Ethiopian offers fast connections throughout Africa from its four Chinese destinations.

In addition to Guangzhou and Hong Kong, Ethiopian serves Hangzhou four times per week with 767-300ERs via New Delhi. Ethiopian also operates direct from Addis Ababa to Beijing, a route which was upgraded in May-2011 from a one-stop 767-300ER service via New Delhi to a non-stop service with 777-200LRs.

Ethiopian has typically expanded its Asian network by adding new points as a one-stop, initially to build demand before moving to a non-stop service. Hong Kong and Guangzhou were first served via Bangkok. Guangzhou moved to a daily non-stop service in Oct-2011 opening the way for Kuala Lumpur to be added.

Ethiopian currently operates 10-times weekly to Bangkok with seven of those flights going on to Hong Kong the other three to Kuala Lumpur.

When Hong Kong becomes a direct daily service from 18-Jun-2013, Kuala Lumpur will increase to four times weekly and Ho Chi Minh will be added. It is unclear whether Bangkok will retain its 10 frequencies or if it will drop back to a daily service.

Ethiopian will compete against market leader and fellow Star member Thai Airways on the route as well as Vietnam Airlines, Turkish Airlines, Lufthansa and VietJet Air, which will collectively offer 11,674 seats a week in the week starting 17-Jun-2013 according to Innovata, to which Ethiopian will add 708 seats. 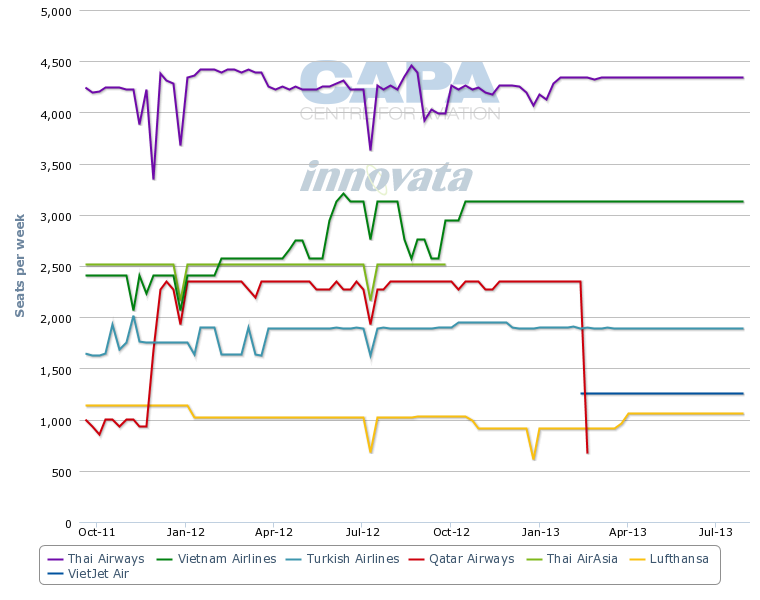 But while Ethiopian had pick up rights between Bangkok and China, it does not have those traffic rights between Hong Kong, Manila and Seoul which could make it more difficult to build demand.

Ethiopian’s Seoul service will compete with Korean Air’s three times weekly direct flights to Nairobi, according to Innovata. Korean plans to develop Nairobi as its gateway hub for its African services and began testing the market with ad-hoc charter service from Seoul in Jan-2012. Kenya Airways codeshares on Korean’s direct services, as well as on some of Korean’s flights between Bangkok and Seoul.

South Korea, Vietnam and the Philippines are growth markets for Africa

As with all Asian destinations, Ethiopian’s new routes are targeted at expanding development and investment opportunities from South Korea, Vietnam and the Philippines to grow its Addis Ababa hub which is linked to 44 destinations across Africa.

Much of South Korea’s focus is on agricultural development under “The Korea-Africa Food and Agricultural Cooperation Initiative” (KAFACI) signed in 2010. Under the memorandum of understanding, 16 African nations will benefit from South Korea’s experience in building food production capacity based on the model that eradicated rural poverty in the North Asian nation. More than 80% of Africa’s population lives in rural areas with many suffering starvation, including Ethiopia, due to poor farming techniques.

In return South Korea has invested in Africa’s lucrative natural resources as its looks to reduce its dependence on oil from the Middle East. Its big corporates are also increasingly turning their attention to the growth opportunities in Africa as sales in traditional markets such as the United States and Europe slow. Electronics giants Samsung and LG Electronics are expanding their African presence buoyed by the continent’s rapidly growing middle class which has led to a surge in demand for household electronic goods.

African coffee exports to South Korea are also expected to grow, with the country already the second largest coffee drinkers in Asia after Japan, and the country is seen as a potentially strong tourism market for East Africa in the future.

Vietnamese exports to Africa include rice, apparel electronics, plastics and chemicals. Vietnamese farmers are teaching their African counterparts in rice cultivation, freshwater aquaculture and beekeeping, while its chemical and mining companies have invested in energy and mining projects.

The Philippines is a promising work in progress

Like Vietnam the Philippines is a major exporter of electronic products, apparel and oil, but its trade with Africa is more limited and appears to be largely focused on South Africa, its largest trading partner in the region. South Africa’s imports from the Philippines totalled ZAR1.23 billion (USD139 million) from in 2011 making it the 55th biggest import partners, while total exports were worth ZAR489 million (USD55.6 million) in 2011 ranking it 89th among South Africa’s export nations, according to Statistics South Africa.

Singapore is a notable omission from Ethiopian’s expansion

Interestingly, Ethiopian’s expansion does not include services to Singapore. The carrier in 2011 expressed interest in Singapore Changi potentially becoming its Asian hub and developing its relationship with fellow Star Alliance member Singapore Airlines to include codeshares on SIA’s North Asia network.

Singapore Changi is also keen to attract an East African carrier to develop Singapore as hub for broader Asia-Africa connections, something that rival Star hub Bangkok has been more successful at doing, attracting services from several African carriers, including Ethiopian and Kenya Airways.

SIA operates a daily Boeing 777-200ER service from Singapore to Johannesburg which goes on to Cape Town four days a week. It also operates a weekly 747-400 freighter service.

Ethiopian and SIA do codeshare via Dubai, but the omission of Singapore from the new network suggests that hopes for an expanded relationship with SIA have not come to fruition. SIA is generally not keen on codesharing with carriers that serve Singapore with their own aircraft.

Ethiopian has also announced plans to commence three-times weekly service to Brazil from 01-Jul-2013. The services will operate a Boeing 767-300ER flying Addis Ababa-Lome-Rio de Janeiro-Sao Paulo-Lome-Addis Ababa. Ethiopian will be the sole operator on the route, according to Innovata.

Ethiopian is the latest carrier to attempt to link the booming Asia-Latin America market, particularly to China, by funnelling traffic via its Addis Ababa hub. The Latin American service arrives at Addis Ababa at 21:25, allowing it to connect with the Guangzhou flight departing at 00:10.

Most direct route between Sao Paulo and Guangzhou

Kenya Airways is arguably even better placed with the great circle route from Sao Paulo to Guangzhou passing almost directly overhead its home hub of Nairobi.

Linking the high-growth economies of Asia and Latin America is something that many airlines are grappling with, but the route is largely too long to operate non-stop due to aircraft range limitations, even for the next generation 787 and A350. And certainly not from Brazil to China.

Cathay has previously evaluated serving Latin America either with its own metal or working with partners.

Ethiopian is gradually expanding its presence deeper into Asia using its own metal to tap into key growth markets as it competes with Kenya Airways and Nairobi to establish Addis Ababa as Africa’s eastern gateway.

Becoming the only carrier to link three of the biggest growth regions in the world, Latin America and China via Africa should give Ethiopian a competitive edge and strengthen the Addis Ababa hub.

Ethiopian is likely to remain focused on building its Africa-Asia presence as the carrier receives its remaining six 787 on order over the next few years.

However, Ethiopian’s protective government which strictly limits foreign carrier access to Addis Ababa, especially those from Gulf states which are rapidly expanding their African presence, will stand in the way of the hub achieving its true potential.