Dubai’s Emirates has continued the astonishing run of profitability displayed by large carriers this reporting season, revealing a USD925 million net profit for the first six months of the financial year to 30-Sep-2010. The figure is a 351.2% increase compared with the USD205 million profit it reported for the same period in 2009, and just USD40 million shy of the net profit it reported over the 2009/10 financial year.

The strong result is also another indication of just how far airlines have managed to leverage the improving environment to turn around their performance.

Most of Emirates peer carriers have been profitable over the same period; British Airways reported a net profit of GBP107 million for the six months to 30-Sep-2010, All Nippon Airways achieved a net profit of USD163.9 million.

Full service airlines have been reporting strong financial results this year, prompting IATA to raise its industry financial forecast for 2010 from a loss of USD2.6 billion to a profit of USD5.3 billion. The airlines industry lost a combined USD9.9 billion in 2009 and USD36 billion in 2008.

The carrier’s Chairman and CEO, Sheikh Ahmed bin Saeed Al-Maktoum, hailed the result as “incredibly robust”, coming as it does less than 12 months after the 2009 Dubai financial meltdown. Emirates’ revenue rose 35.5% year-on-year to USD7.3 billion.

Dark spots on the horizon for Emirates are the cost of fuel - which hit a six-month high above USD83 per barrel this week - and the less-than-spectacular performance of the Dubai and UAE economies.

Emirates’ operating costs were up 22.6% to USD6.3 billion in the first six-months of its financial year. Fuel continues to be the most significant expenditure for the airline.

The UAE’s economy has slowly recovered from the global financial crisis and is projected to grow at 2.4% in 2010, as the economy benefits from a strong rebound in Asia and the restructuring of USD25 billion in debt over the Dubai World project. However, the pace of growth in the UAE economy is expected to be outstripped by all its GCC neighbours in 2011.

Protectionist allocation of traffic rights will also be an increasing concern, as the recent UAE-Canada diplomatic spat illustrates. Emirates plans to build its passenger destinations beyond 100 cities in 2011.

Even with the modest economic growth in the UAE, it is hard to see Emirates slowing its growth. Even during the height of the crisis, when the UAE GDP dipped 2.4%, the carrier was still able to maintain profitability and double-digit increases in passenger traffic and capacity. The return of economic growth is only going to spur the carrier onwards. 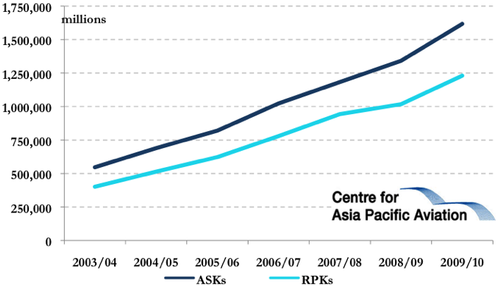