Emirates stretches out A380 network with Singapore, Melbourne, Auckland and Moscow

With 25 A380s in service and another 65 on order, Emirates is the world’s largest A380 operator by a convincing margin. The A380 is pivotal to the carrier’s strategy and Emirates is expanding its A380 network significantly over the next two months, adding more destinations in Asia and Europe.

Emirates has pioneered much of the development of A380 routes, using the aircraft not only for long-haul services to major cities worldwide, but also deploying the aircraft to smaller destinations and even on short-haul intra-regional services. It has continually adjusted frequencies and rotated the aircraft to find the sweet spot, even operating the aircraft up to three times daily on key routes.

The carrier’s initial A380 deployment strategy was based around key destinations such as New York, London and Sydney, which feature exceptional traffic volumes and a high proportion of premium travellers. Key aviation ‘megacities’ – to borrow Airbus’ term for destinations with more than 10,000 long-haul passengers per day – still form the backbone of the carrier’s A380 network.

There are some obvious exceptions to these megacities on Emirates' A380 network map, notably Auckland.

Emirates also uses its A380 aircraft as a method of adding seats to destinations that have been capacity-limited or even just as a way of reacting to strong demand. Toronto is a case in point, where Emirates has been limited by the existing bilateral air services agreement to just three flights per week. When premium volumes faded on the banner Dubai-New York route due to the onset of the global financial crisis, the carrier repositioned an A380 from New York to Toronto. Munich is another example where the A380 has been used by Emirates to overcome a limited bilateral air services agreement.

Despite having served with Emirates since Jul-2008, the A380 maintains its position as a star performer within the Emirates fleet. In terms of overall passenger load factor and premium load factor, the performance of the carrier’s A380s was better than for any other type in Emirates' all-widebody fleet during FY2011/12.

This puts the carrier towards the upper end of the seating densities for A380 operators. Only Lufthansa, with 526 seats, and Air France, with 538 seats, offer higher density configurations.

See related article: Where the Airbus A380 will fly next

Emirates now operates to 18 destinations with the A380.

In the past 12 months, Emirates has added Johannesburg, Munich, Kuala Lumpur and Amsterdam to its A380 network. In 4Q2012 another four destinations are being added to the permanent roster – Melbourne, Auckland, Singapore and Moscow.

Emirates added A380s to its direct Dubai-Melbourne route on 01-Oct-2012 and on Melbourne-Auckland the next day. The carrier’s other two daily services to Melbourne, one operating via Kuala Lumpur and one through Singapore, will continue to be operated with Boeing 777-300ERs.

The carrier described deploying the A380 into Melbourne as a key component part of its proposed alliance with Qantas, which was announced in Sep-2012. If the partnership gets approval, Emirates and Qantas will operate a combined service of four daily flights between Melbourne and Dubai with the one Qantas frequency also being operated with A380s.

Emirates' 777-300ERs into Melbourne are configured with 354 seats: seven first class, 42 business and 305 economy. Adding three-class, 489-seat A380s to Melbourne increased direct Dubai-Melbourne and Auckland-Melbourne capacity by around 38% and lifted premium seat numbers by almost 84%. Overall, the carrier has added just under 22% to its total capacity to/from Melbourne by deploying A380s.

Singapore already has a twice-weekly “ad hoc” A380 service. After “extremely positive responses” from passengers, Emirates has decided to introduce the aircraft to Singapore on a permanent basis from 01-Dec-2012.

After Dubai, Singapore is the world’s second busiest airport in terms of A380 operations. Singapore Airlines took delivery of its 19th and final A380 in Sep-2012. Singapore as an A380 hub sees A380 operations from Qantas, Air France and Lufthansa. Thai Airways also plans to begin operating A380s to Singapore from 28-Oct-2012.

Emirates will add its higher-capacity 517-seat configured A380s to Singapore. This will lift capacity per flight by 46% over the 354-seat configured 777-300ERs currently operating on the Singapore-Dubai route. Premium capacity on the flight which is upgraded to the A380 will jump by 84%.

Emirates operates three daily non-stop flights from Singapore to Dubai and one daily one-stop flight to Dubai via Colombo in Sri Lanka. Overall Emirates capacity in the Singapore-Dubai market will be raised by over 1,000 seats per week. 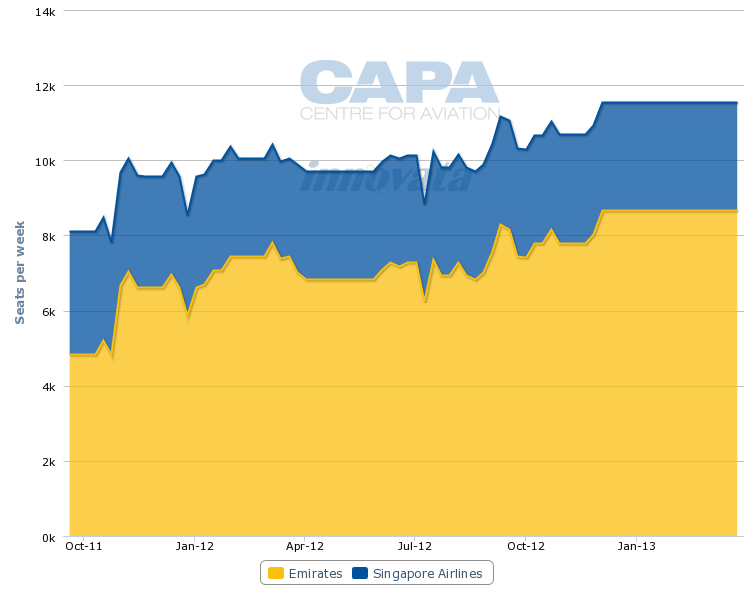 Moscow will also join the A380 network from 01-Dec-2012. The aircraft will replace 777-300ER aircraft on one of two daily Moscow-Singapore services. The 517-seat variant will be deployed, raising capacity by almost 23%. Moscow Domodedovo is the only Russian airport that is fully equipped and certified to meet A380 operating requirements, although Moscow Sheremetyevo and Novosibirsk Tolmachevo have also received certification to handle the aircraft.

Once these cities have bedded in their A380 operations, Emirates will likely launch another wave of expansion for its A380 network. The airline will also continue to thicken its A380 operations on existing routes – New York and Paris A380 services will go to double daily from Jan-2013 while Hong Kong is due to receive additional A380 capacity from Mar-2013.

Emirates is due to receive another A380 in Nov-2012 and then four A380s in Dec-2012. Deliveries in 2013 are so far unconfirmed, but the airline is due to receive close to two aircraft per month in 2013, about two thirds of all A380 deliveries Airbus has planned for the year.