Emirates' announcement to open a daily service to Barcelona and an additional daily flight to Madrid, after only entering the country in 2010, shows how Spain is unique for Emirates in being a major European market with no incumbent local competition since Iberia operates what it calls a "90 degree hub": its long-haul traffic, a successful operation, is almost entirely to the Americas, leaving Spain's demand for medium- and long-haul services east of Europe to be fulfilled by foreign carriers. Emirates does not target Iberia's Americas network from Spain but does focus on Africa, where Iberia has limited service, the Middle East, where Iberia only serves Cairo and Tel Aviv (the latter of which Emirates will not serve) and Asia-Pacific, where Iberia has no service to at all.

Iberia partner British Airways prices itself out of market

Iberia's merger partner British Airways, part of International Airlines Group (IAG), has extensive links out of its London Heathrow hub to Africa, the Middle East and Asia-Pacific, but conspiring against Iberia and British Airways for better links to east of Europe from Spain are largely two factors, one external and one internal. Externally, Emirates' lower cost base eclipses that of most legacy carriers, Iberia and British Airways included. Internally, British Airways' London Heathrow flights run at a premium due to the city's high corporate demand and capacity restraints at Heathrow (although this will partially be alleviated by acquiring bmi). Strong local traffic is advantageous to chasing lower-yielding connecting traffic, but not being able to meet Spain's non-American long-haul needs is still a lost opportunity. By the time IAG can amass in Spain the scale needed for long-haul routes to the east, it risks Emirates and other carriers tying up the market.

Emirates, with its current daily Boeing 777-300ER service to Madrid, is Spain's 40th largest international carrier and seventh largest non-Europe carrier with 10,416 weekly seats. Based on Innovata capacity data for February, Emirates' expansion to an additional daily Madrid service from 01-Jul-2012 and a daily Barcelona service from 03-Jul-2012 will, at approximately 31,248 weekly seats, make it the 23rd largest international carrier and largest non-European carrier.

Strong European hub carriers like KLM and Lufthansa will hold an advantage in being able to access the majority of the Spanish market by serving more points than just Barcelona and Madrid. Those two cities account for a fifth of the country's population, although a far higher share of premium traffic. Emirates will serve Spain exclusively with 777-300ERs, its preferred equipment along with A380s, to serve premium markets, indicating the traffic Iberia has to pass over is not just leisure traffic but premium too. Qatar Airways also serves Madrid with 777-300ERs, which are also its premium aircraft of choice.

Depending on the country, KLM and Lufthansa can operate to more points than Emirates. In China, for example, Lufthansa operates to six cities, KLM to five and Emirates to three, although Emirates in the medium term will catch-up and surpass rivals. On city pairs Emirates can link, it wields pricing superiority, although many routes involve significantly longer journey times than going with a non-Gulf carrier.

Emirates is making rapid moves in the Spanish market, tripling its capacity after having only arrived in 2010. Qatar was the first Gulf carrier to serve Spain, opening a Madrid link in 2005 and then Barcelona in 2010. In the European summer, Qatar plans to operate 16,396 weekly seats in Spain via a daily 777-300ER Madrid service and a daily A330 Barcelona service. Emirates' planned capacity increase will see it offer twice as many seats as Qatar.

Any Iberia expansion east of Europe will likely come from IAG's efforts to serve the emerging Asia-South America market, for which there are no direct flights. Primary transit opportunities are through Europe, the Middle East or North America. Iberia is well positioned in Latin America, being the largest European carrier in most markets except Brazil, where TAP – a potential IAG acquisition – reigns. However, Iberia's lack of Asian routes eliminates its possibility in the short-term to be a hub, even though Madrid posses strong geography: a flight from Tokyo to Sao Paulo via Madrid is only two nautical miles longer than a hypothetical non-stop service.

British Airways, strong in Asia, has a weaker Latin America footprint and IAG does not consider it viable to have passengers transfer via both London Heathrow and Madrid. IAG director of strategy Robert Boyle remarked last year that Asian expansion from Madrid was likely, but not in the short term. "From a strategic point of view, together with partners, we would be looking to build some linkages into Asia from Madrid," he said.

Asian oneworld members include Cathay Pacific and Japan Airlines (JAL), as well as members-elect Kingfisher Airlines and Malaysia Airlines and hopefully – the alliance hopes – a future mainland Chinese member. Although those carriers could theoretically funnel traffic from Asia to Madrid, doing so would again involve two-stop flights compared to the one-stop services Gulf carriers are building, even if their routes can be longer than going through Europe. (Additionally, JAL has close relations with Air France and Cathay takes a hands-off approach to alliances, cooperating little.)

With IAG seeing demand from Spain to Asia primarily to link the latter to Latin America, Iberia will largely surrender its non-Americas traffic to foreign carriers while taking them on for services into Latin America. 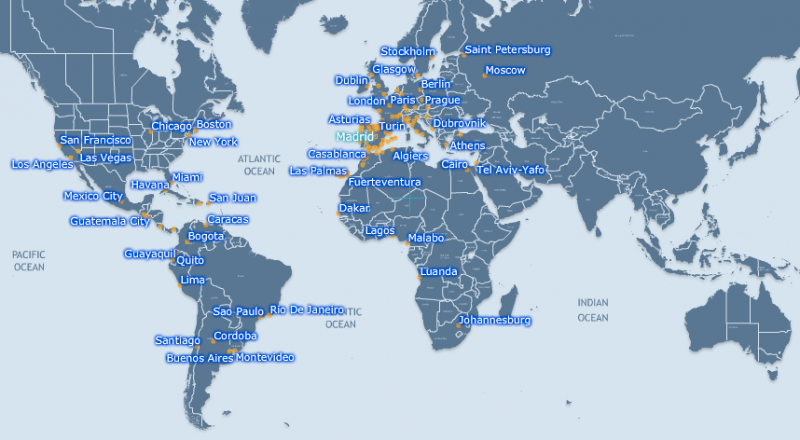