With little sign of a B777 update or replacement in the immediate future, Emirates, the world’s largest airline in terms of international passenger traffic, is pressing Airbus for more range for its A350-1000.

Last year, Emirates became the world’s largest operator of the B777, supplanting Singapore Airlines in that position. Its fleet of 86 B777s consists mostly of very long-range variants of the aircraft; 10 of the 200LR with its unmatched 17,400km range and 53 of the shorter-ranged but higher capacity 300ER. The carrier’s fleet also contains some older and shorter-ranged B777 variants: three 200s, six 200ERs and 12 300s.

The B777 will remain one of the mainstays of the Emirates fleet for at least the remainder of the decade. The carrier has another 49 300ERs on order, due for delivery over the next six years. 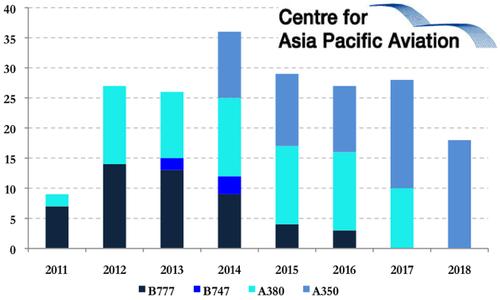 However, even the larger size of the A350-1000 has not wholly satisfied Emirates. Even though the initial version of the aircraft – the 900 – has yet to fly, Emirates is pushing for Airbus to squeeze more capacity and range out of the later 1000, which Airbus has yet to freeze the design for. President, Tim Clark, speaking to Bloomberg, stated that he is “trying to persuade Airbus to realign the A350-1000 more toward the ER, increasing both its capacity and its range”.

Emirates wants to be able to reach Los Angeles from Dubai in the three-class layout, according to Mr Clark. The carrier is “finding that the smallest aircraft that’s useful to us needs to be 340 seats”. The B777-300ER can operate the Dubai-Los Angeles sector, but does it at a reduced payload. The B777-200LR can easily make the distance, but the carrier configures the aircraft with only 266 seats.

B777 range chart from Dubai 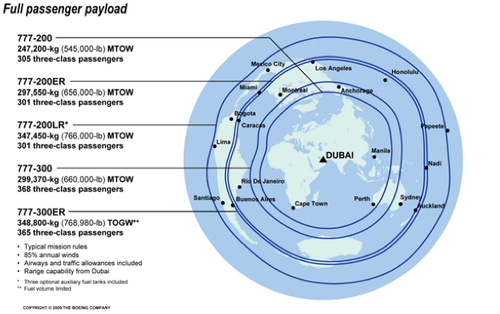 The US West Coast is an attractive market for Emirates. The carrier already operates to Los Angeles and San Francisco with B777-200LRs, as well as a 17-hour sector to Houston. The carrier has already expressed its wish for more range/capacity out of the B777, to maximise revenues on its ultra long-haul flights from Dubai to the US West Coast without load/weight penalties.

Several carriers, including Emirates, have been pressing Boeing to develop a further stretched version of the B787. Boeing has been reluctant to design a B787-10 until it gets the B787-8 and B787-9 into service. The B787-9 is not due to enter service until 2013. The manufacturer has been tight lipped on whether it will go with the "double stretch" B787-10, or fill the market segment with a replacement for the B777.

Interest in new B777

Emirates is also interested in the potential of a B777 revamp or an all-new aircraft in a similar range and capacity class. Mr Clark has confirmed that Emirates could order more A350s or B777s in future and that there is room for both aircraft in the carrier’s fleet.

Boeing’s dilemma is where to go next with its aircraft development once the oft-delayed B787 and B747-8 programmes are sorted. Both the B777 and B737NG are into their second decade of service, and there is pressure from many quarters for new aircraft to replace existing designs.

While Airbus seems likely to pursue its A320 NEO (new engine option) and fit new engines onto the existing A320 family, Boeing is less positive about the economics and sales potential of fitting new engines to the B737NG. On top of this the B737 is continuing to sell in immense numbers – Boeing has sold 449 this year and plans to build production from 31 to 38 aircraft per month by 2013. Neither Airbus or Boeing want to bring in new narrowbodies until 2025.

The B777 has also continued to sell well – 48 aircraft this year - but Boeing has already confirmed that it is looking at replacing the aircraft in its product line-up, potentially by the end of this decade. In 2009, the manufacturer mooted designing and fitting a new wing to the aircraft – an option it pursued with the B747-8 – and possibly stretching the airframe for even more capacity.

That option was not met with much enthusiasm from potential customers. The concept was similar to that of Airbus with the initial A350 design, which was eventually abandoned for an all-new design in 2006, after much criticism from customers. In response to Boeing’s suggestion, Mr Clark commented that he would rather Boeing think about an all-new aircraft.

Emirates has close to 150 aircraft on order, including 76 more A380s. The carrier will be taking delivery of at least 20 aircraft per year between 2012 and 2018, all of them widebodies with 300 or more seats.

Incredibly though, this does not appear to have satisfied the airline. Mr Clark has previously stated that the carrier could expand its A380 fleet to 120 aircraft, if it were not for space limitations at Dubai International Airport. It continues to press for larger, longer–range aircraft to meet its requirements. Emirates wants to fly further from Dubai, with more passengers. All it needs is manufacturers to provide the right aircraft.