Emirates’ financial result for full year 2008/09 – a net profit of USD268 million - stands out among a host of negative reports from airlines across the world. It is greatly reduced from the previous year’s record USD1.45 billion, but, in the two worlds of 2008/09 – from soaring fuel prices to slumping demand – this was no mean performance. 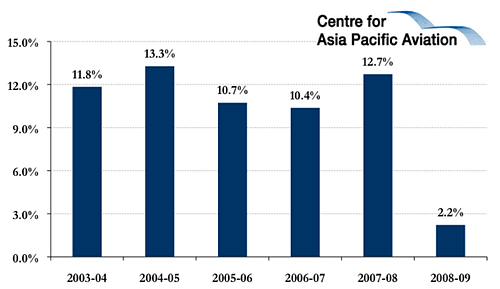 In the first half of the year, fuel came to represent 43% of total cost (36% over the full year); then, as demand slackened at an unprecedented rate, Emirates' network model has performed remarkably well. This model is inevitably not immune to severe downturn - and the post-March period is seeing an exodus from Dubai - but Emirates remains well-equipped to handle adversity.

Over the first quarter of 2009 and last quarter of 2008, the strength of the US dollar against many currencies will have hurt yields, but as the USD (and the linked UAE dirham) declines, net yields should improve, providing something of an umbrella against the continued ferocity of the economic downturn.

But demand – and market capacity – will be the key driver in the months ahead. Over the past year passenger seat factor came in at 75.8%, despite a capacity (ASKs) increase of 13.4%. Meanwhile, yields held up well, increasing 8.4% (USD69.8 cents per RTK), from USD64.4 cents in the previous year.

The cargo operation took delivery of its first B777 freighter in Mar-2009, added to the existing seven B747Fs.

The airline’s headlong growth pattern slowed considerably over the year, to a relatively modest 7.9% increase in capacity (RPKs). 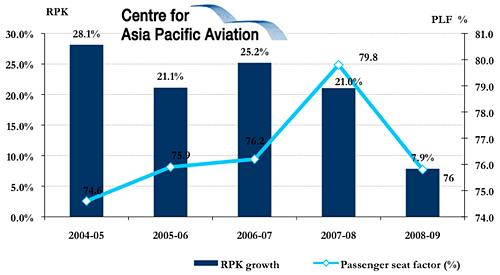 Emirates’ own capacity increases are not the only concern on the capacity-demand side. As global markets have contracted, the continued economic glow from the Middle East has attracted foreign Asian and European airlines to redirect surplus capacity into the Gulf region. Today, Emirates still maintains a healthy 58% market share at home hub, Dubai Airport.

But that does not tell the full story, as Etihad Airways at neighbouring Abu Dhabi Airport is expanding into Emirates’ space, with an aggressive nearby Doha-based Qatar Airways looking to steal away market share too. 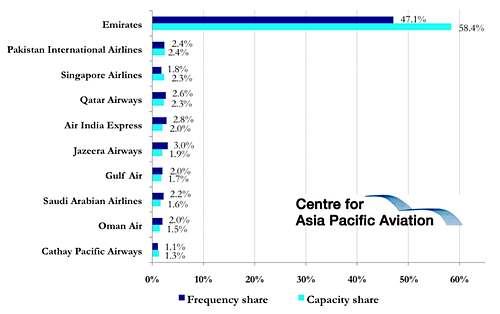 And slowing demand, as global conditions remain weak, will continue to eat away at profitability. This will necessarily impose a constant review of the carrier’s suitable rate of expansion over the coming year.

The past year saw Emirates Group (including ground handler Dnata, Emirates SkyCargo and the Leisure division) cash balance reduce by more than a third, to USD2.4 billion, after incurring major capital expenses, on Terminal 3 and aircraft refurbishment. So a key question for the future, as traffic remains subdued, will be Emirates’ continuing commitment to accepting the high level of aircraft it has on order.

But that is not yet appearing as an issue and, given Emirates’ market power with the major aircraft manufacturers, this too may prove to be an obstacle that this seemingly unstoppable force can surmount. Meanwhile, there is no talk of a slowdown.

There are “only” 18 aircraft scheduled for delivery this year and funding them has not been a problem so far. According to Sheikh Ahmed bin Saeed Al-Maktoum, Group Chairman and Chief Executive, “With our strong business fundamentals and track record, we have had no problems securing financing for our growth. In fact, to date we have already secured financial commitments for over half of our aircraft deliveries in the coming year.”

Says Sheikh Ahmed, “Our development plans remain unchanged. We have weathered the last twelve months with satisfactory growth, maintained the quality of our award-winning service, and maintained staff numbers in the face of an unsettled future. We will continue to forge ahead to build the airline, Dnata and the many subsidiary companies that are part of the Emirates Group.”

As of 31-Mar-09, the total number of aircraft on Emirates’ order book, excluding options, was 161 aircraft, valued at around USD52 billion. The expansion continues, for now at least.

The timing of this downturn, albeit unwelcome, is in many ways quite fortunate in terms of the carrier’s long term consolidation and expansion. Emirates, operating 132 mostly widebody aircraft, has already established itself to the stage where its network power – and the ability therefore to leverage higher than proportionate market and pricing power - is highly developed. With the combination of traffic pull, above average yields and aggressive careful cost controls, profitability remains a reality.

The coming year will undoubtedly test the model to the ultimate. But, as other global competitors struggle, the key test will be who emerges strongest from these troubled times. Emirates will most likely be among the leaders for the long term.