As airlines around the world slash their networks and defer or cancel aircraft orders amid a sharp downturn in demand, Emirates has confirmed plans to expand its seat capacity by 14% in 2009 with the addition of 18 new passenger aircraft - all widebodies. Emirates Sky Cargo will increase its cargo capacity by 17% this year.

Emirates will add seven A380s, ten B777-300ERs, one B777-200LR and one B777F to its fleet next year, to add new routes and consolidate others with additional frequencies.

Chairman and CEO, Shaikh Ahmed bin Saeed Al-Maktoum, stated "we see [2009] as a time of opportunity", although it would be a "year of consolidation for us, with fewer new routes launched than in previous years".

Emirates confirmed plans to deploy A380 equipment to Incheon and Singapore in Nov-2009 and Dec-2009, respectively.

Emirates' UAE rival, Etihad Airways, has also expressed cautious optimism about the outlook. CEO, James Hogan, told USA Today this week, "we are a growing business, still on the upward curve". He added, "our Business class is holding strong".

Latest data from the International Air Transport Association (IATA) shows the Middle East is garnering a larger share of worldwide premium traffic as the global economic downturn accelerated in late 2008, although premium demand in the Middle East did turn negative in Dec-08. 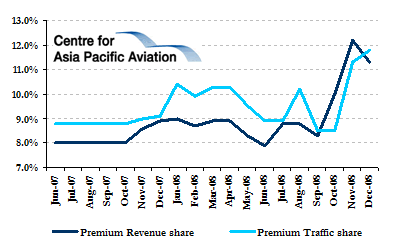