Unlisted Emirates announced an order with Boeing for 30 B777-300ERs. 18 of these were previously attributed to an unidentified customer. Emirates is already the world's largest B777 operator with a fleet of 86 B777s through direct purchase and lease, plus an additional 16 B777-300ERs previously on order.

At last month's Berlin Airshow the astonishing airline made a firm order for 32 more A380s. This took to 90 the number of A380s to Emirates' account.

Emirates’ aircraft in service and on order: as at Jun-2010

The purchase of another 62 widebodies will indelibly stamp the UAE carrier as a page-turner in the history of aviation. See related article: Emirates declares war on the world’s flag carriers with order for 32 more A380s

Middle Eastern shares were mixed yesterday (19-Jul-2010), with Kuwait National Airways (-1%) down, Jazeera and Royal Jordanian steady while Air Arabia’s (+0.4%) shares were on the rise.

1time (+1.9%) announced it will commence five times weekly Johannesburg-Maputo service on 12-Aug-2010. Other African shares were on a downward slide with Lonrho (-4.6%) and Kenya Airways (-0.5%) down, while Comair remained stable. 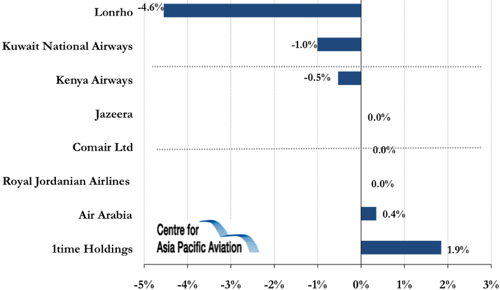