Connections between Africa and Asia will grow from 21-Jun-2012 with Korean Air's seasonal three-times weekly service between Seoul and Nairobi, Kenya. The hub-to-hub flight will link Korean Air's Asian-focused hub to the extensive and growing African hub of fellow SkyTeam carrier Kenya Airways, which plans to serve every African capital city within five years.

The Africa-Asia market will boom this decade, according to Airbus projections that see Africa having the highest percentage growth of traffic to or from Asia. Korean Air's route follows charter services to Nairobi as well as the signing in Dec-2011 of a trade agreement between South Korea and Kenya.

Korean Air will be the only Asian airline to serve East Africa, which geographically and combined with a partner's hub allows for greater traffic feed across Africa. Asian airlines have predominantly focused on serving South Africa while African carriers serve multiple Asian points.

Kenya Airways' largest competitor to Asia is and will be Ethiopian Airlines, which is also pursuing an extensive Asian strategy that it will grow further with the arrival of 787s. Like with Kenya Airways, Ethiopian's Addis Ababa hub facilitates connections across Africa. East African hubs can offer geographic advantages to Gulf hubs.

The timing of the service, loaded into global distribution systems for service until 27-Oct-2012, facilitates connections at either end of the flight. The outbound flight from Seoul, departing in the evening, allows for connections across Korean Air's network to Nairobi, although given the geography of Korean Air's Seoul hub, connections will be strongest around North Asia as other points will require backtracking through Seoul. Given overall limited flight options between Africa and Asia, Korean Air may see passengers on circuitous itineraries. At 5431nm, Korean Air's route to Nairobi will be one of its longest, and one of the longest for the A330 globally.

The early morning arrival time in Nairobi allows for onward connections on Kenya Airways' network. On the return Nairobi-Seoul flight, although Korean's flight leaves mid-morning, Kenya Airways has a number of regional flights arriving into Nairobi around 5:00 and 6:00 that will allow for potential transfers to Seoul. The early morning arrival in Seoul allows for onward connections on Korean Air's network.

Currently just five carriers operate non-stop between Asia Pacific and East Africa: Ethiopian Airlines, Air Mauritius, Kenya Airways, Air Austral and Air Madagascar. The routes are dominated by links to China for business travel purposes and a few destinations in Southeast Asia that act as either stop-overs for the China services or as sources of tourism.

Of the five carriers, only three presently operate to North Asia: Air Mauritius, Ethiopian and Kenya Airways. Additional Asian and African carriers link Asia to Southern Africa, and South Africa in particular, but onward connections are limited and can require significant backtracking. 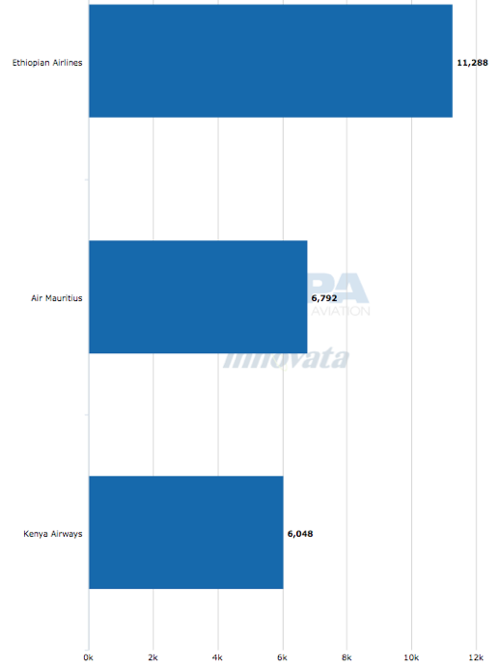 The service comes after South Korea and Kenya signed an agreement to promote trade, which is heavily weighed toward imports from South Korea into Kenya than exports from Kenya to South Korea. Business leaders entered the agreement on 23-Dec-2011 with the aim of opening up trade markets between the two countries, a culmination of discussions that started in 2010 when South Korea sent a delegation to Kenya to scout for investment opportunities. Kenya’s natural resources include limestone, salt, gemstones, zinc and hydropower, and Kenya Airways’ strategic plan to serve every capital city in Africa within five years appeals to South Korea, which is seeking other African countries to invest in. 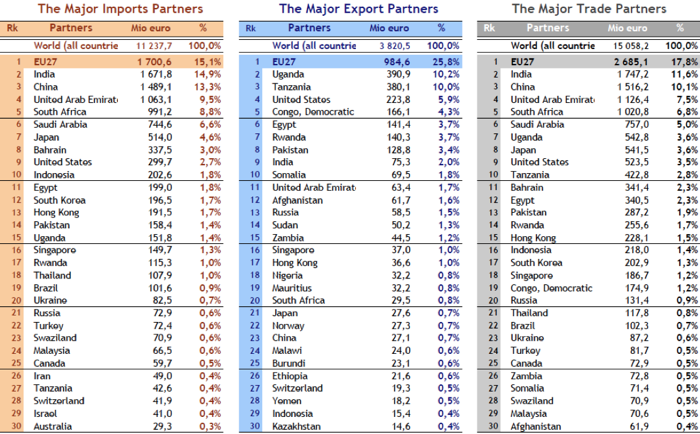 Nairobi International Airport is also a major business hub with premium seats accounting for approximately 18% of all available seats, well above the worldwide average of 5.2% (in comparison, 21% of London Heathrow's seats are premium). Korean Air’s service will further strengthen Nairobi Airport’s position as a business hub. 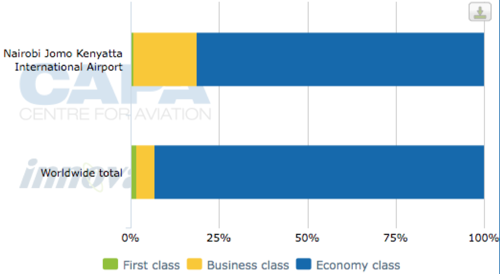 South Korea identified as potentially strong source of tourism, with opportunity for services to grow

Korean Air operated the first ad hoc charter service between Seoul and Nairobi on 15-Jan-2012. South Korea has been identified as a potentially strong tourism market but due to the previous lack of non-stop services, the Kenya Tourism Board (KTA) has been unable to tap this possibly lucrative source. Kenya and South Korea are now engaged in talks over a potential open skies agreement.

Tourism is emerging as a strong industry in Kenya with the KTA reporting over 1 million international visitor arrivals for the year to Oct-2011. Of this, 90% of tourist traffic arrives via air. Visitor arrivals have been increasing steadily over the past number of years, increasing from 1 million in 2000 to 1.4 million in 2009. Of the total number of visitors, 778,000 in 2000 and 1 million in 2009 were for leisure purposes. The UK, US, Italy, Germany, France, Uganda and the Netherlands are Kenya’s largest sources of visitor arrivals, largely reflecting available routes into Kenya. Of Asian countries, China and Japan are the largest sources but only account for between 1% and 2% of the market. Korean Air’s service should change the tourism market while providing links for business travellers to further investment and open the number of destinations available to Kenya.

The next steps in this service will be to bring the route to a year-round operation and increase frequency. As Korean Air is largely limited in serving Kenya from South Korea, further SkyTeam growth into Kenya Airways' very promising Nairobi hub can come in due course from other members. 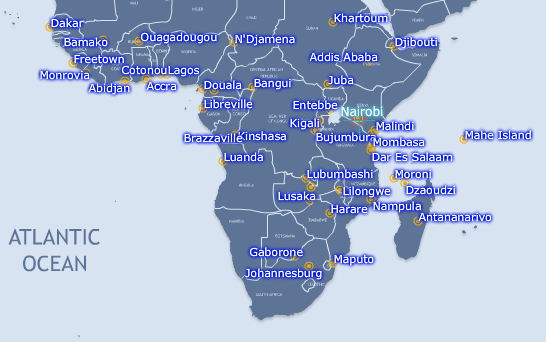 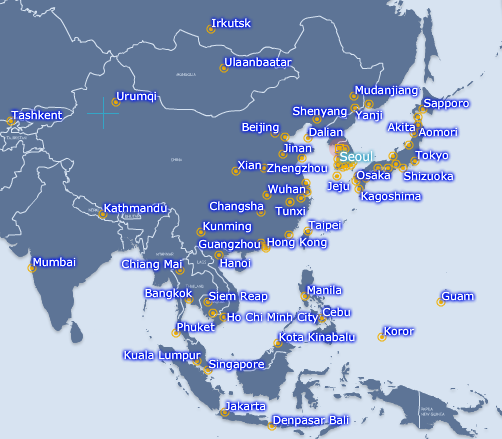